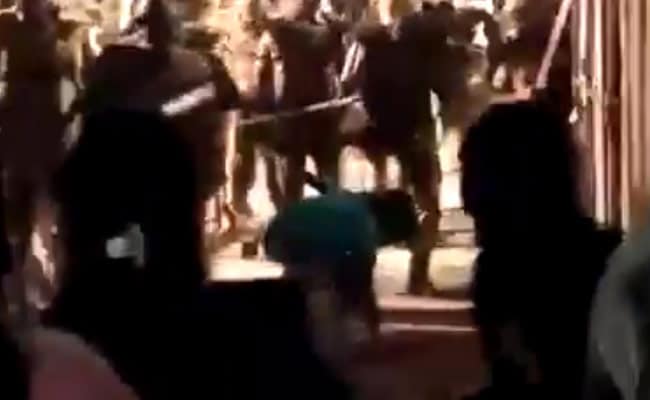 BHU protest: No women constables were present when a woman was thrashed by cops.

VARANASI:  As violence broke out at Banaras Hindu University (BHU) around 11 last night over alleged molestation of a student inside the campus, in a video that has emerged today, the cops can been seen repeatedly hitting a woman student outside the Mahila Mahavidyala hostel. No women constables were present at the university. After clashes erupted between the police and a group of students who tried to enter the Vice Chancellor’s residence, the cops resorted to lathicharge to contain violence. Several students got injured in the scuffle. At least three motorcycles were set on fire in the violence allegedly by some of the protesters.

The students claim that the police lathicharged without provocation and didn’t even spare women students. They also alleged that the cops also tried to enter the women’s hostel. In the video, cops are seen charging towards women near the hostel gate and brutally beating the one who stands up to them before the gate closes.

The main gate of the university has been cleared of protesting students. The situation is under control, cops stationed at the university campus said today.

While reacting to the violence against protesting students, former UP Chief Minister Akhilesh Yadav tweeted, “Lathicharge on BHU students is condemnable. The government must find solutions through talks and not force. There should be action against those involved.” 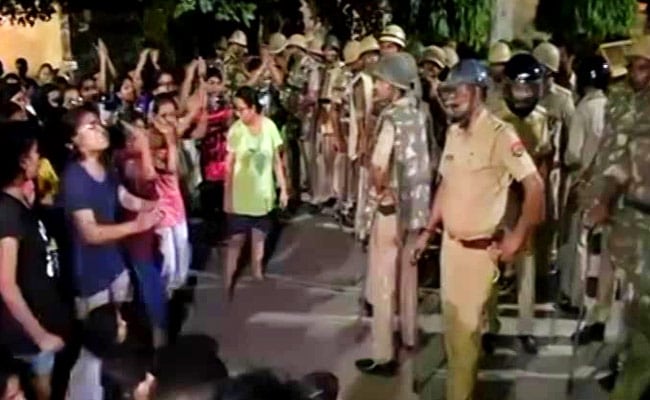 The students claim the police lathicharged without provocation and didn’t even spare women students.

Students have been protesting against the university administration’s alleged inaction and victim shaming after a first-year woman student reported an incident of molestation on Thursday.

The woman alleged that three bike-borne men harassed her inside the campus when she returned to her hostel on Thursday evening. The men abused her and fled when she resisted their attempts, she said. She alleged that security guards, who were right there, did nothing to stop them and her hostel warden, instead of taking up the issue with the administration, asked her why was she returning late to the hostel.

The warden’s response angered the students who sat on ‘dharna’ at the main gate later that evening. One of the students reportedly got her head tonsured.

The protesting students had hoped that Prime Minister Narendra Modi, who was on a two-day visit to Varanasi, would meet them and listen to their complaints. However, on Thursday, when the Prime Minister and his entourage were supposed to pass by the main gate of the university, their route was reportedly changed by his security officers.

“She is in trauma and such an incident can happen to anyone. This campus is not safe at all,” said Ankita Singh, a protesting student.

The students say they just want to meet the Vice Chancellor to urge him to ensure safety on the campus. “If you go inside the campus in the evening, you will realise that harassment is a common problem here,” said Shweta Mishra, a student.

Sources in the university administration say the BHU campus is huge and open to public and policing every area is not possible. Nonetheless, security inside the campus would be reviewed, they promised.

Rajesh Kumar Singh, the public relations officer of BHU, however, said, “80 per cent of the protesters are outsiders. This is a politically-motivated protest.”https://www.ndtv.com/india-news/students-injured-as-police-lathicharge-during-late-night-clashes-on-bhu-campus-1754375