Bihar’s Heath Care institution, IGMIS, does NOT have Sexual Harassment Committee as per Law #Vaw 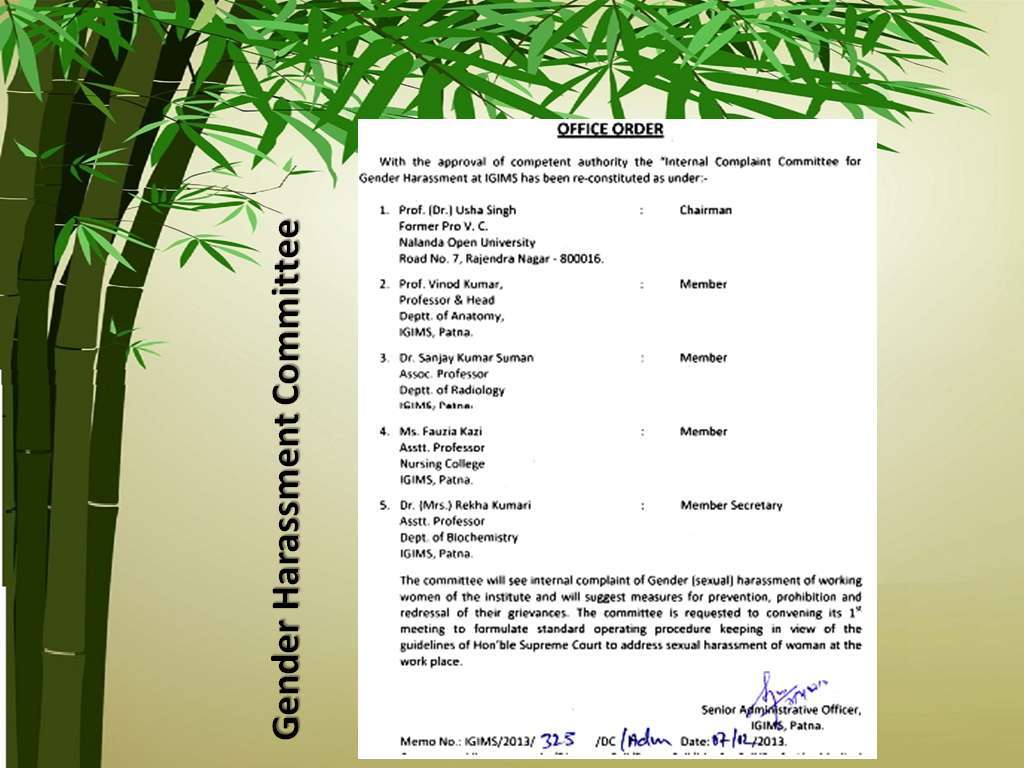 This IGIMS OFFICE ORDER (dated 7/12/13) about “re constitution ofICC”. The Sexual Harassment of Women at Workplace (Prevention,Prohibition and Redressal) Act, 2013 and Rules 2013 have come intoeffect from 9th Dec 2013. Therefore IGIMS has to issue a new officeorder.Looking at the Officer Order the most important part which is missingis that the reconstituted ICC does not speak about 1 member from(NGO/Association committed to the cause of women/person) as per theSexual Harassment of Women at Workplace (Prevention, Prohibition andRedressal) Act, 2013.

Therefore the very reconstituted ICC is bad in law.

Rupashree Dasgupta was appointed Associate Professor, Nursing, Indira Gandhi Institute of Medical Sciences (IGIMS), Patna, in October 2011. Her appointment was a logical next step in an academic and professional life in which she has been an outstanding achiever with many merits and gold medals to her credit. These qualifications along with the requisite experience earned her a spot as Associate Professor in Bihar’s premier medical institute. Excited and determined, Rupashree got ready to enter a new phase of life teaching nursing. However, nothing prepared her for what was to follow on the IGIMS campus.

In the first few weeks itself, Rupashree started to realise that the Institute was not being run in a professional manner, but rather like the fiefdom of the then Director, Arun Kumar, who is the brother-in-law of the then DGP Bihar, Mr. Abhayanand. From our experience in women’s movement we know that such situations with powerful men in positions of authority do not bode well for women in terms of ensuring a safe and a professional workspace. In Rupashree’s case, this manifested itself as unrelenting and unwelcome sexual advances and sexual harassment.

Soon after she joined the IGIMS, Arun Kumar demanded sexual favours in return for ‘letting’ her continue staying in the staff quarters (a request  that she had placed as a prerequisite for taking up this job and one that was accepted by the interview panel). When Rupashree refused to comply, the Director created, directly and via other staff members and people known to him, a hostile and a dangerous workplace. Outlined below is a very brief summary of the myriad ways in which she was harassed.

When Rupashree moved the gender harassment committee at IGIMS, she was turned down without as much as a preliminary hearing. The committee merely asked her to submit an application to the administration. This is a shocking lapse on the part of the said Committee and would have been a clear violation of the Vishakha Guidelines of the Supreme Court (that were then being followed, in absence of a law) and the current Sexual Harassment of Women at Workplace (Prevention, Prohibition & Redressal) Act 2013 and the Criminal Law Amendment Act 2013. The points below illustrate how the formation of the Committee itself was manipulated to ensure that Rupashree did not stand a chance of a fair hearing:

Rupashree’s situation took a turn for the worse on 15th July 2013. That very morning she had been operated upon after an accidental wrist injury and had barely managed to recover from the surgery when she was summarily discharged.

That same night at 11.30 pm, police from Gandhi Maidan mahila police station visited Rupashree and informed her that then Chief Minister of Bihar, Nitish Kumar, has taken interest in her case and has summoned her to know details. Rupashree went along with the police who forcibly took her to the police station, and illegally and wrongfully confined her for 17 hours. During this time, she was denied medicines, food and water. This further deteriorated her condition and added to the aggravation of her post-op health condition. . This abuse of State machinery by the ex-Director Arun Kumar who is credited with saying “ye larki aise nahi manegi, ise toh ek aadh gaddha khod kar gagdh do” about  Rupashree , is very alarming.

Immediate action must be taken against him as well as  the then  DGP Bihar Mr. Abhayanand who he is related to and without whose complicity this illegal and wrongful confinement would not have been possible with such ease.

About  Dr Arun Kumar and current situation: He had voluntarily retired from Nalanda Medical College and Hospital to join IGIMS on January 2004 as professor and Head of Department, Anaesthesia, moving upwards to become the Acting Director in June 2008, followed later in the year in December 2008 to become a full-fledged  regular Director of the Institute, a position that he occupied for 5 years till December 2013. Currently he is Head of Department and Professor, Anaesthesia, at IGIMS and will be completing his service in September 2015.

While  Dr Arun Kumar comfortably continues with his service and enjoys all related benefits, Rupashree continues to run from pillar to post seeking justice. She cannot work anywhere as her services were not dispensed with by the authorising body of IGIMS, the Board of Governors, as it is still pending for confirmation. So she is in a peculiar situation where is she not being ‘allowed’ to work, has not been paid her salary and there is no communication from the IGIMS about what it plans to do next. Rupashree is currently fighting eleven cases in all, of which seven cases are in lower court and four cases in the Patna High Court. She has also filed a complaint with the Bihar State Human Rights Commission.

She is without a job that is rightfully hers, without any financial support and is holding on to her on-campus accommodation at great jeopardy to her own life and most significantly, because she had managed to get a stay on her eviction from the Patna High Court.

All this violence, suffering, harassment because she said NO to the sexual advances made by ex-Director  Dr Arun Kumar?

Cow slaughter ban: From Kashmir down, the pot boils over
AIDWA demands strict implementation of laws against child rape and withdrawal of the ordinance on #...
Gujarat- TN Dalit medico’s suicide-attempt IMA writes to TN government
Fact Finding Report -The aftermath of violence in Muzaffarnagar #Vaw #mustread