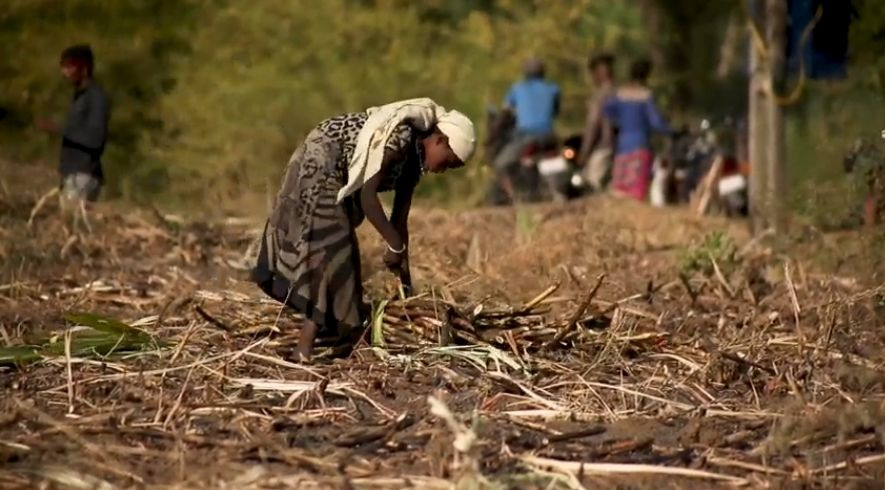 Nearly two lakh tribal workers migrate every year from districts of Dang and Tapi in Gujarat and Nandurbar and Dhule in Maharashtra to harvest sugarcane in farms of South Gujarat. The workers are deployed by the Sugarcane Cooperative Factories promoted by sugarcane farmers who are a powerful political community. The workers are recruited by middlemen against advances that they have to pay back one and a half times after the six-month work season.Low piece rate wages that that fall even below the per day agriculture minimum wages ensure that workers toil for long hours with their families including children remain perpetually indebted. Living conditions are primitive, comprising of plastic shanties with no basic amenities, that provide a stark contrast with the palatial farmhouses of the farmers.Workers work in pairs, normally comprising of husband wife. The sharp implement used to harvest sugarcane is called koyta. The individual work unit has also come to be referred to as koyta in common parlance. Recently, the sugarcane harvesting workers have waged a struggle under the banner of the Majur Adhikar Manch for a hike in wages and decent work conditions.The struggle has led significant wage hikes.

The struggles comprise a remarkable instance of migrant workers successfully organizing for their rights. The diaries, shared over imternet with like-minded individuals supporting workers’ struggles, capture the struggle at some significant moments.It estimated that almost 50,000 workers migrate every season from Dang district alone to cut sugarcane that feeds the cooperative sugar factories of South Gujarat. It is one of the largest seasonal migration streams involving movement of up to 250,000 men, women, and children.

The workforce camps on the outskirts of villages in primitive makeshift huts of polythene. They work alongside tribals from Khandesh in Maharashtra and other tribal districts of South Gujarat.The workers toil for up to 10-12 hours cutting cane in the fields. Then they are called back to lad the harvested sugarcane into trucks. The wages are low. There is a system of advance payments that binds workers to the work place for the duration of the season.

While attempts were made to organise the workers in early nineties, there is no collective memory of these attempts. Work conditions have deteriorated instead of improving since the last 40 years when these were documented by Professor Jan Breman. It is in this background that their attempts to organize them has to be seen.

Recent public meetings by the workers have preceded intensive village campaign where the Union team visited majority of the 300 villages and prepare a list of contractors, locally called mukaddams. The participants list their problems and discuss strategy to solve these. A local committee is formed. The committee meets for intensive discussions and charting out an action plan.The participation by large mukaddams is shaky. They advance large sum of money to the workers and are suspicious of any attempts that seeks to disturb the status quo. At the same time, they also have their roots in the working class and are acutely aware of the exploitation taking place. Working with labour contractors and mediating their role is a key challenge in any organizational work with informal sector workers.–