BJP EXPOSED- Operation EVM: From where 187845 votes came in Varanasi?

We are going to show you that how the manipulation can happen in EVMs. Let us make this very clear that all these data has been taken from Election Commission website. If there is some error then EC should make a statement to clarify all the doubts which will good for Election Commission and as well as for Indian demoacracy. 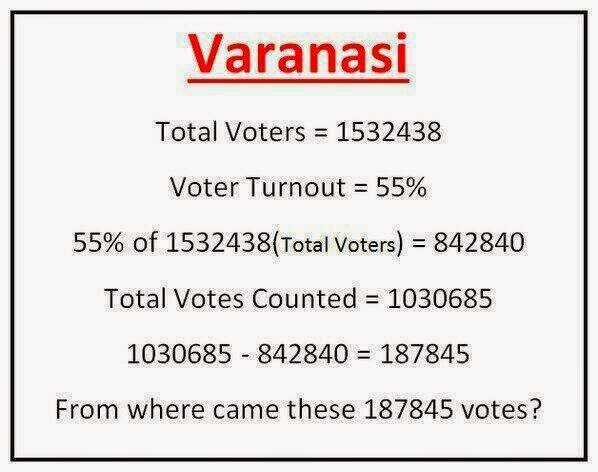 THE  SOURCE OF  STATISTICS IS HERE-
http://ceouttarpradesh.nic.in/PollPhase/phaseWisePolling.htm
Surprisingly, If we take the example of Amethi and Raibareilly, no such extra votes found. But such extra votes are found in almost every seat that BJP has won
Have a look on Meerut’s scenario 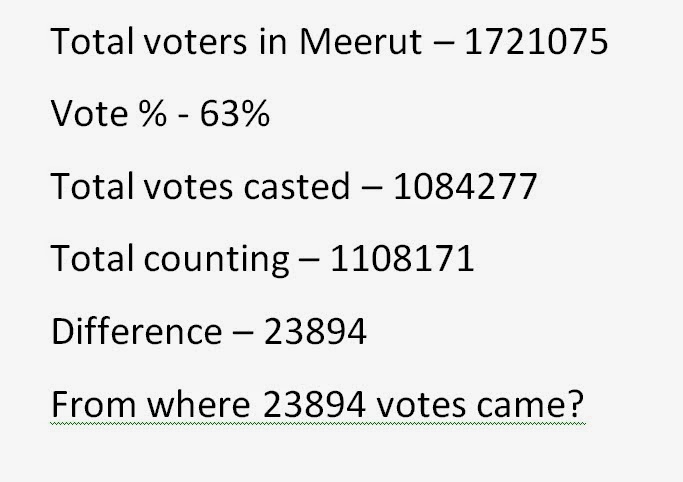 US Professor explains how EVMs can be rigged in India.
Contrary to claims by Indian election authorities, the paperless electronic voting systems used in India 2014 election suffer from significant vulnerabilities. Even brief access to the machines could allow criminals to alter election results 2014.
In this video, we demonstrate two kinds of attacks against a real Indian EVM Machine. One attack involves replacing a small part of the EVM machine with a look-alike component that can be silently instructed to steal a percentage of the votes in favor of a chosen candidate. These instructions can be sent wirelessly from a mobile phone. Another attack uses a pocket-sized device to change the votes stored in the EVM between the election and the public counting session, which in India can be weeks later.
These attacks are neither complicated nor difficult to perform, but they would be hard to detect or defend against. The best way to prevent them is to count votes using paper ballots that voters can see.