BJP gains in polls after every riot, says Yale study

The paper maintains that while the Hindu-Muslim riots are electorally costly for the Congress, these riots in effect strengthen the “ethno-religious parties.

GANDHINAGAR: While many within the Congress blame its electoral debacle to the party’s obsession with “minority appeasement”, a recent study conducted by three political scientists of the Yale University claim that had Congress lost all close elections between 1962 and 2000, there could have been 10% more communal riots in the country.

Gareth Nellis, Michael Weaver, Steven Rosenzweig, political scientists from the Yale University in their paper titled “Do parties matter for ethnic violence? Evidence from India”, have maintained that “the election of a single Congress MLA in a district brought about a 32% reduction in the probability of a riot breaking out prior to the next election. Simulations reveal that had Congress candidates lost all close elections in our dataset, India would have faced 10% more riots and thousands more riot casualties”.

“The pacifying effect of Congress incumbency appears to be driven by local electoral considerations, in particular the party’s exceptionally strong linkages to Muslim voters during the period we investigate,” they have written. They further maintain that “riots produce ethnic polarization that benefits ethno-religious parties at the expense of the Congress”. The paper maintains that while the Hindu-Muslim riots are electorally costly for the Congress, these riots in effect strengthen the “ethno-religious parties at the expense of multi-ethnic ones like the Congress”.

Analysing the effect of riots on the vote share of “Hindu nationalist parties”, the paper notes that “the BJS/BJP saw a 0.8 percentage point increase in their vote share following a riot in the year prior to an election”. “The polarization of the electorate induced by riots disadvantages Congress in subsequent elections, making it counter-productive for the party’s affiliates to instigate riots following an electoral loss,” the paper notes.

“In addition, local Muslim voters — on whom the Congress depended for votes — would presumably have looked unfavorably towards Congress orchestrating riots in which Muslims were the principal victims. This would make instigating riots a highrisk strategy where there are large Muslim populations, yet this is precisely where we find the effect of Congress to be strongest,” the paper adds. 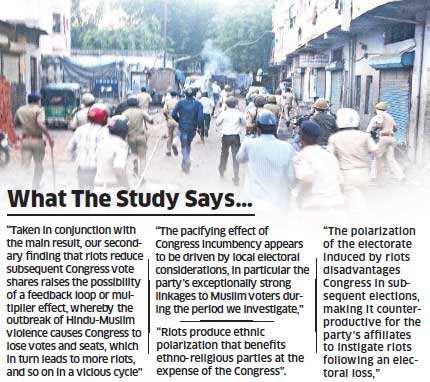 “India itself underwent traumatizing paroxysms of Hindu-Muslim violence during the partition of the subcontinent in 1947; there were fears following independence that enmity stemming from this cleavage would again tear the country apart,” the paper notes.

It adds: “The paramount importance of Congress’s role is underscored by the fact that our estimates likely place a lower bound on its true impact. Taken in conjunction with the main result, our secondary finding that riots reduce subsequent Congress vote shares raises the possibility of a feedback loop or multiplier effect, whereby the outbreak of Hindu-Muslim violence causes Congress to lose votes and seats, which in turn leads to more riots, and so on in a vicious cycle.”

India - A September of Protests
Press Release - NGT restrains Shamuka Tourism Project , Odisha
#India - Do you know what is the cost of UID ? and who Benefits ? #Aadhaar
Where Are Those Who Trolled Sufi Heads Who Met PM Modi In 2015 And Then Organised The World Sufi For...