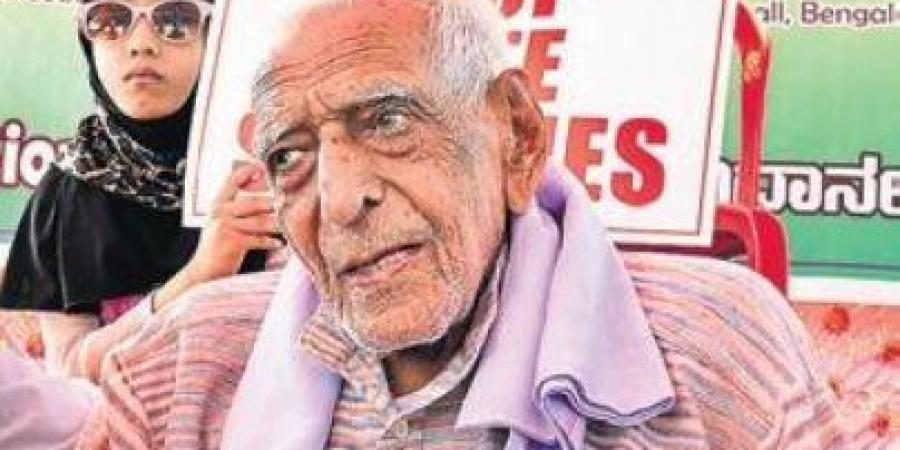 Basanagouda Patil Yatnal, former Union Minister and Bharatiya Janata Party (BJP) MLA, created a stir when he, while speaking to media persons in Vijayapura yesterday, called the 101-year-old freedom fighter H.S. Doreswamy a “fake freedom fighter” and a “Pakistani agent”. Doreswamy has been at the forefront of many progressive struggles in Karnataka in the past and has been a firm fixture of the continuous protests that Bengaluru has witnessed since the passage of the Citizenship (Amendment) Act (CAA) in December last year.

Yatnal’s comment was in response to former Chief Minister and Congress leader Siddaramaiah questioning the role of the Sangh Parivar in the freedom struggle in a rally against the CAA in Vijayapura on February 25. Siddaramaiah tagged Chief Minister B.S. Yediyurappa in a tweet and urged him to take stringent action against Yatnal. “If not, acknowledge that this is the opinion of your government,” he added. Siddaramaiah cautioned Yediyurappa that if the BJP did not rein its leaders in, the Delhi example was there for all to see, referring to the riots that have rocked Delhi over the past three days.

Doreswamy, who was born in 1918, played a prominent role in the Quit India movement in 1942 in Bangalore (now Bengaluru) and was even jailed for his activities against the colonial government. The centenarian continues to be active after a lifetime of activism. He is the president of the Gauri Lankesh Memorial Trust that was formed after the brutal murder of the journalist and writes a column for Nyaya Patha, a weekly Kannada tabloid brought out by the Trust.

The Swaraj India Bengaluru Urban District Executive threatens to start a state-wide agitation to be called by Swaraj India and allied parties, and civil society groups, and will further consider legal action including a defamation suit if an apology is not tendered.

Basanagouda Patil Yatnal, a senior BJP Leader and MLA of Vijayapura, has made derogatory remarks against the 102-Year-old freedom fighter HS Doreswamy, who has been vehemently protesting against CAA , NRC and NPR laws brought by BJP Government, has been fighting vehemantly against the divisive forces of communal politics of Hindutva and Sangh Pariwar.

“There are many fake freedom fighters. There is one in Bengaluru. Now we have to say what he is. Where is that old man? He behaves like a Pakistan agent,” he has said insulting and defaming a dedicated civil rights activist and Gandhian freedom fighter. It should be noted that according to a self-affadavit filed by Yatnal during the elections, there are 23 criminal cases pending against him.

The above insulting statements by the MLA against the Gandhian who is a respectable figure not just Karnataka but all over India have hurt the feelings of all right-thinking Kannadigas. Doreswamy has been a symbol and a respected voice, protecting the secular spirit of the Indian freedom movement. Hence, calling him a `Pakistani Agent’ is an insult to all Indians. Calling the respected freedom fighter who fought all his life for freedom struggle as a `Fake freedom fighter’ shows how BJP and RSS hates the freedom fighters who fought against the British Raj.

We demand an immediate apology from the BJP and the said MLA of Vijayapura immediately. We stand by Doreswamy, the Pride of India.

Stand in Solidarity with Prof. Anand Teltumbde and Gautam Navlakha
Whose Iron Ore is it Anyway ?
Gujarat - Nalco pulls out of JV with NPCIL for nuclear power plant
India - #DeathPenalty for Rape - 16 year old raped and set ablaze #Vaw