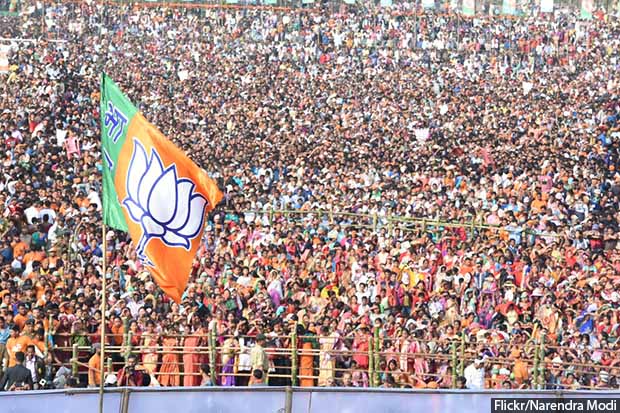 Mumbai: As many as 58 members of parliament (MPs) and members of legislative assembly (MLAs) have declared that police complaints of hate speech have been filed against them, according to a report by the Association for Democratic Reforms and National Election Watch, released on April 25, 2018.

Based on an analysis of self-sworn affidavits submitted by electoral candidates prior to the last election they contested, the report found that MPs and MLAs belonging to the Bharatiya Janata Party (BJP) have reported the most (27, or 47% of all) cases of hate speech filed against them, followed by MPs/MLAs from the All India Majlis-E-Ittehadul Muslimeen (AIMIM) and the Telangana Rashtra Samithi (TRS), with six each.

The maximum number of MPs/MLAs who have self-declared cases of hate-speech filed against them are from Uttar Pradesh (UP, 15), Telangana (13) and poll-bound Karnataka and Maharashtra (five each).

As many as 15 sitting MPs in the Lok Sabha (lower house of parliament) have declared hate-speech cases against them–10 from the BJP, and one each from the All India United Democratic Front (AIUDF), TRS, AIMIM, Pattali Makkal Katchi and Shiv Sena.

No MP from the Rajya Sabha (upper house of parliament) has declared cases against themselves, the report said.

Among the current members of legislative assemblies (state legislatures), 43 have declared cases against themselves, of whom 17 are from the BJP; five each are from the TRS and AIMIM; three from the Telugu Desam Party; two each from the Indian National Congress, All India Trinamool Congress, Janata Dal (United) and Shiv Sena; one each from Dravida Munnetra Kazhagam, Bahujan Samaj Party and Samajwadi Party; and two are independent MLAs.

Two leaders of political parties–Asaduddin Owaisi of the AIMIM and Badruddin Ajmal of the AIUDF–have declared cases.

Uma Bharti, the serving Union Cabinet Minister for Drinking Water and Sanitation, has declared cases related to hate speech against her.