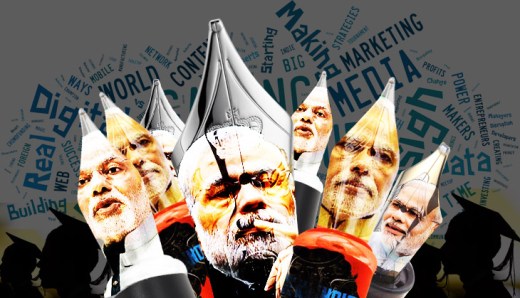 The writer is a Melbourne based independent researcher and writer. Formerly he taught political science in DelhiUniversity and was the national general secretary of People’s Union for Civil Liberties (PUCL) @pushkarraaj

The BJP has completed two years in office recently showcasing its achievements with public money  followed by the national executive meeting of the party. The prime minister has congratulated his government for its achievements of   ‘development’ of the country. In reality, however, while the Indian economy has underperformed in the last two years as compared to a recent past, socially and institutionally too the country’s performance tumbled downwards which is a matter of concern not a celebration.

The Indian economy grew on an average of 8 percent in 2004-14, while it has grown by 7.5 percent in the last two years – still short of 0.5 percent that the country recorded during the previous congress government’s tenure (World Bank- India data and trading economics.com).

On the contrary, the government has been lacking in redistribution of fruit of economic growth amongst the most needy of the society- the landless farmers, in the grip of drought and desperate for work under Mahatma Gandhi National Rural Employment Guarantee Act. The government could only provide for 40.1 days of work to poor during 2014-15, lowest since the scheme was launched a decade ago. The creation of 48.6 man-day’s work in 2015-16 is encouraging but it is still under 54 man-days work generated in 2009-10 (Ministry of rural development, government of India).

Socially, the debate on personal matters such as eating and saluting has divided the country on communal lines. Hindu rightist forces are busy debating whether meat found in Dadri was mutton or beef neglecting the fact that a citizen of India was lynched by a mob instigated on an issue that concerned his personal eating choice. Under the new regime, the national debates are being ignited and fought on ‘mythological’ grounds with emotional spins while the top political leadership chooses a casual silence.

Consequently, there is a general discomfort amongst liberal sections of intelligentsia within the country and abroad over growing religious and social intolerance in public and private life in India. United States Commission on International Religious Freedom in its latest report stated that religious tolerance deteriorated and religious freedom violations increased in India in 2015.  Based on religious and social freedoms available to citizens in the country, India was placed in the company of Turkey and Russia under tier 2 countries barely escaping being clubbed with Pakistan and Egypt! It is a serious commentary on erosion of secularism as a value in our political and social life despite its being part of the preamble of the constitution. The Fraser Institute, a think tank based in Canada that gauges personal freedoms enjoyed by the citizens of a country gave India 9.14 points over 10 in 2012 while it could score only 7.36 points in 2015, pointing to a sharp rise on control over citizens’ private life by the society and state.

On the governance front, some of the major institutions of the country declined in their credibility and integrity during last two years.

While government has not paid any attention to the Chief Justice of India’s public disappointment over pending cases and judicial reforms, it was quick to appoint another retired chief justice of the Supreme Court as the governor of a state, apparently, a lower position under the constitution. Besides, credibility of the Judiciary and prestige of office of the governor also suffered due to allegations that the appointment had something to do with the said justice’s judgment quashing the second FIR against the ruling party’s president (The Hindu, 4 September 2014).

Police continued to touch new lows with its abysmal functioning in the country, more so recently in the capital of the country. Delhi police’s embarrassing spectacle was on show during the JNU ‘sedition’ case when it exhibited  poor understanding of law (it could never convince others if there was a legal case made out against the accused under sedition given the Supreme Court’s ruling on the said section), and inexcusable failure to protect the accused in its custody. When the prime minister talks about improvement in governance, it should also mean reforms in an institution that supervises implementation of laws of land. If the police itself are oblivious of legal nuances then talk of governance is a delusion.

The image of Army as an institution suffered due to appointment of its retired chief as a junior minister in a government headed by a party known for its exclusive agenda and minority bashing. Though constitutionally there might not be a restriction for assuming such a position, but it strikes a blow to the confidence of minorities especially in J & K and Assam (with a sizable Muslim population) where Army is often called upon to assist civil administration.

In field of bureaucracy, there is no progress on 2nd administrative reforms commission report submitted in 2009. Even a ban on oral instruction from political bosses and superiors and fixed tenure in posting ruled by the Supreme Court has not been implemented. All that has happened is reconstitution of appointment committee of cabinet that has enabled the prime minister office to centralize control of bureaucracy.

Institutions such as Film and Television Institute of India, Central Board of Film Certificates, University Grants Commission, Sahitya Academy and central universities, to name a few,  have seen questionable appointments and whimsical functioning.  Predictably,  in governance rank released by the London based think tank, Legatum Institute, Indian rank in governance slipped to 53rd position in 2016 from 49 in 2015(www.prosperity.com).

As the BJP continues to wage an aggressive propaganda of development and strategy of social divide, social and political institutions of the country are likely to further stifle, weaken and erode. It would be interesting to see how this moribund social and political structure that is being fashioned by the party will support economic growth and prosperity that the Prime Minister is promising!http://www.indiaresists.com/bjp-two-year-rule-economic-slowdown-social-divide-institutional-erosion/

Rajasthan farmers after burying themselves waist-deep in the mud, now start an indefinite fast
The only thing that can protect a writer’s freedom is you, the reader #FOE
Longtime Critic of Modi Is Now a Target
List of those killed in Delhi communal riots