A Bharatiya  Janata Party poster for the just concluded Kerala assembly elections reveals a lot about its strategy in a state which has consistently rejected the lotus. It provides the best clue yet as to why the party which is unlikely to make much political headway in the near future is finding comfort in the spread of Hindutva across the state.

The poster features the triad of Prime Minister Narendra Modi, party boss Amit Shah and state BJP president Kummanam Rajasekharan with the strategic slogan ‘Vazhimuttiya Keralam, Vazhi kaattan BJP’. This translates to “Kerala has lost it way; BJP will show it the path.”

Of the three, Modi appears to be the least clued in on how to win over this recalcitrant state which has so far rejected the blandishments of his ‘development plank’ that catapulted him into 7 Race Course Road two years ago. He has regularly wooed Kerala since early 2014, well before he became the prime minister, and he has made frequent visits to the state. Yet, he has shown a poor understanding of the Malayali psyche. Some political analysts believe he has botched the BJP’s prospects with his Somalia remark.

But the canny Shah and his acolyte Rajasekharan are better tuned into Kerala. The appointment of Rajasekharan, an RSS pracharak, as party boss in the state marks a turning point in the BJP strategy. Rajasekharan is hardcore Hindutva, and his anointment in December 2015 is both reward for his services in diffusing the saffron ideology and recognition of his ability to push the party agenda further. Over the past decades, Rajasekharan has been the battering ram of the Hindu Aikya Vedi or Hindu Unity Organisation, the Vishwa Hindu Parishad (VHP), Kshetra Samrakshana Samiti (KSS or Temple Protection Committee), Balasadanams (for very young children) and Ekal Vidyalayas. His has been an all-encompassing role, efficiently executed and with little fanfare.

It is well known that he and Shah enjoy a rare rapport and see eye-to eye on what needs to be done in Kerala. An excellent communicator and networker, Rajasekharan has brought on board well-known figures like G. Madhavan Nair, former chairman of the Indian Space Research Organisation, T.K.A. Nair, principal secretary to former prime minister Manmohan Singh, on the Hindutva bandwagon and deployed them effectively to influence people and win friends. 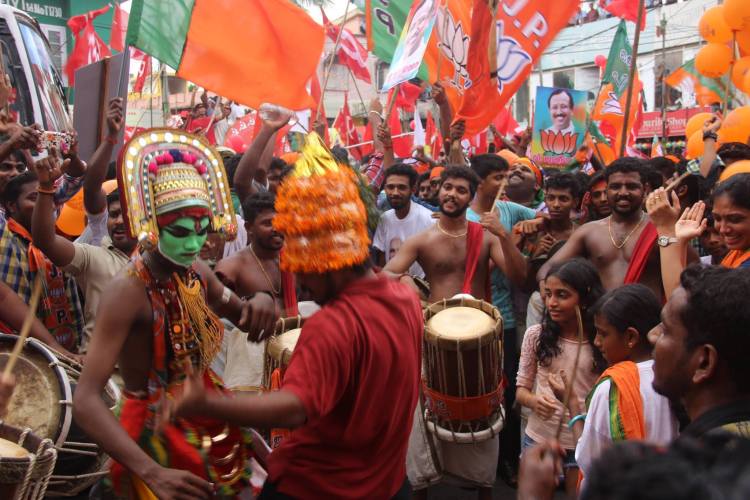 His elevation to the party presidency came within weeks of the BJP’s best yet poll performance in Kerala. In the November 2015 local body elections, the BJP wrested Palakkad municipality from the UDF and also emerged as the second largest party in the Thiruvanthapuram corporation after the LDF. If there are turning points, this certainly was one:  the saffron party’s vote share rose from 10.5% in the 2014 Lok Sabha elections to 14% in the local elections. It was also a signal that the RSS had acquired the critical mass necessary to openly pursue its agenda. The toughest challenge for the RSS-BJP has been the religious demographic profile of the state with Hindus accounting for close to 55% of the populations and the Muslims (26.56%) and Christians forming the rest. It has taken the saffron lobby a long, long while to work around these figures.

But change it has wrought and in ways that the Sangh is familiar with. The most obvious sign of the Hindu resurgence has been the use of the KSS and VHP to “build a temple-based organised society” and a “temple-based way of life”.  Dozens of kavu, or ancient shrines, where theyyam (living god) performances have been held for centuries have fallen prey to this drive. Theyyam is the oldest surviving mystic ritual of North Malabar and it has withstood modernity and Marx for decades. In God’s Own Country, demons and divinities, animism and ancestor worship, have their inviolate spaces and more than half a century of intermittent rule by the CPM-led Left Democratic Front (LDF) has made little difference to the ways in which the Malayali has kept religion in one box and politics in another.

This is the paradox of Kerala. To believe that the LDF has ushered in a socialist revolution in this state is as naive as thinking that the BJP’s inability to win a single seat in the assembly and parliamentary elections so far is proof that the saffron ideology has failed to penetrate Kerala. By embedding itself in the local community over the decades, the RSS has prepared the ground for taking the state back to a time when religiosity was paramount. It is an alarming regression with rituals and obscurantist views threatening to overwrite the history of its social reforms.

The kavu, which subscribes to animism and ancestor worship, is as integral to North Malabar as the hammer and sickle and the legendary Marxist leader A.K. Gopalan are. And theyyam is the preserve of a host of lower castes. Now, the pre-Vedic kavu are being converted into mainstream Hindu temples and the traditional culture of Kerala, specially that of its Adivasi population and of the lower castes, is being airbrushed from the landscape as the VHP and RSS push their Sanskritisation drive. But there is little protest from the local communities who have been persuaded that the new structures and regular paid puja conducted by Brahmin priests are indicative of upward mobility.

Small family temples and old temples in need of maintenance have also been taken over by the KSS as matters of private faith have been turned into public symbols of majority assertiveness. Everything connected to religion is now loud, public and well-funded. As the recent Puttingal temple tragedy illustrated, religion has become competitive and frighteningly divorced from the traditions of the land. Godpersons are the presiding deities of the new ‘Hinduness’ of Kerala, such as the homegrown Mata Amritanandmayi and Sri Sri Ravi Shankar. Alien festivals such as Ganesh Chaturthi have also made their way into Kerala as the RSS tries to homogenise the Hindus.

The core message of the RSS that Hindus have been neglected and discriminated against by the bipolar politics of the state while the Christians and the Muslims have been pampered by their leaders has succeeded beyond belief. Such a view is easily juxtaposed against the growing conservatism of the Muslims, in particular, since the burqa and religious beards are now a common sight in some parts of the state. Competing religion fundamentalism is feeding cultivated insecurities as rival communal parties jostle for power. A six-week trip through Kannur, the hallowed janmabhoomi of the Communist movement, Palakkad, Thrissur and Ernakulam districts in March-April, made it clear that the secular balance is becoming increasingly fragile as the RSS’s cherished goal of a ‘Hindu Kerala’ turns out to be not such an impossibility.

The rise of the consumerist Malayali and a thriving middle class – it is the only state where the huge billboards are completely monopolised by the gold jewelry trade – has made the incursions of the Hindu Right far easier. As the historian K.N. Panikkar explains in a recent article in The Hindu, “Kerala has witnessed a sudden burgeoning of the lower middle class during the last two decades, whose craving for modernity has created a cultural crisis, a solution for which they sought in superstitious practices and irrational rituals. Their logical destination is the BJP.”

No longer concerned about the need to keep it clandestine, the RSS outfits now openly promote communal polarisation. Anything is provocation and an excuse for muscle-flexing by Hindutva forces. A couple of years ago, the Hindu Aikya Vedi and other outfits like the VHP took out a massive and successful rally against the government’s decision to allow a Muslim religious conference to be held on the Aluva-Periyar river bank because it was adjacent to a Siva temple. The fallout is a growing intolerance which is becoming increasingly ugly as small and hitherto unknown entities such as the Hanuman Sena throw their weight around and strike at the heart of the state’s cultural ethos.

An appalling example of the religious bigotry was the Hindutva campaign against well-known writer and critic M.M. Basheer, who was forced to abandon his columns on the Ramayana in the Malayalam newspaper Mathrubhumi in August last year. There was a virulent campaign against the writer and the newspaper by abusive callers asking why a Muslim should write on the Hindu god Rama. This is said to be the first time a writer has been attacked on the basis of his religious identity and bodes ill for the state. Incidentally, the month of Karkidakam in the Malayalam calendar (mid-July to mid-August) is celebrated by Malayalis as Ramayana month but in recent years what was a private tradition has been turned into yet another public spectacle of religiosity with entire villages being turned in to Ramayana centres by the RSS network.

There have been other instances of intolerance that are undermining the liberal democratic conventions that Keralites take for granted.  In March this year, the saffron brigade attacked popular TV anchor Sindhu Sooryakumar after she moderated a discussion on the why some people celebrate Mahishasur Jayanti and if this should be deemed an objectionable act. This followed the emotional speech by HRD minister Smriti Irani in parliament where she claimed students of Delhi’s Jawaharlal Nehru University had observed Mahishasur martyrdom day and purportedly depicted Goddess Durga as a ‘sex worker’. Mahishasur is the demon killed by Durga.

Sooryakumar of Asianet News TV received over 2,000 abusive calls and threats to her life for allegedly demeaning Durga during the show. The popular anchor had done no such thing but it was typical of the smear-and-tarnish campaign the Sangh outfits are notorious for. Neither the RSS nor the BJP leaders condemned the outrage even after five men connected to the BJP, RSS and other Hindu groups were found to be involved.

Increasingly, their politics of hatred is finding resonance in a state that has so far been impervious to such poison.

In a society which prizes it liberal values and open debates, such instances are becoming frequent as an emboldened Sangh pushes the envelope. In Kozhikode, the ABVP, the student wing of the RSS, is trying to stir up matters. One of its recent sorties was the burning of the college magazine of Zamorin’s Guruvayoorappan College in Kozhikode. It alleged that the magazine contained anti-Hindu remarks. There have been other crass acts such as the burning down of a library near Tirur in Malappuram district and the destruction of a huge collection of books. Arrested again were BJP supporters.

Kerala, admittedly, is no secular haven when it comes to politics. All parties have used religion and caste to promote their interests but none of them has resorted to the kind of polarisation that is now being witnessed. As indicators of the new path the BJP is offering Kerala, these are, indeed, ominous signs of what lies ahead. http://thewire.in/2016/05/18/bjp-wont-capture-kerala-yet-but-rss-culture-is-sweeping-the-state-36806