Going on a rant, a Yuva Morcha leader said that the Mutt was made impure as people who ‘eat cow meat’ and those who are ‘anti-Hindu’ had entered it. 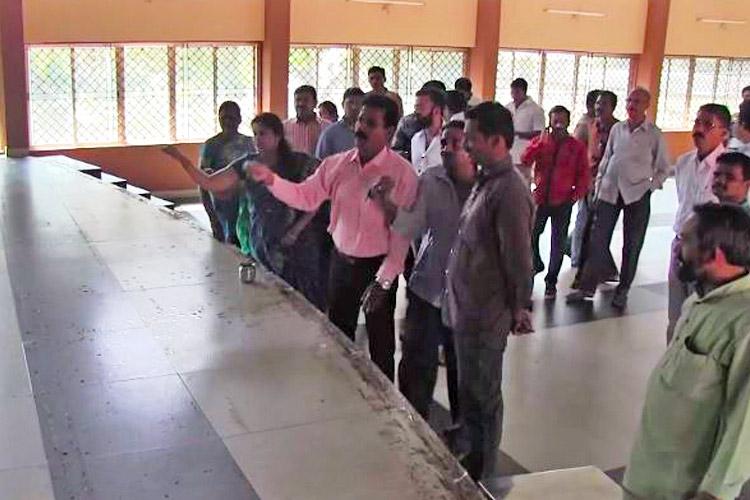 In an atrocious ‘purity ritual’, the BJP’s youth leaders in Karnataka decided to sprinkle cow urine at the venue of a programme where actor Prakash Raj had spoken a few days back. The Yuva Morcha workers decided to go on a “cleansing drive” to “purify” the venue.

On Saturday and Sunday, a programme titled ‘Our Constitution, Our pride’ was held in Karwar’s Sirsi area. Actor and columnist Prakash Raj, who has been vocal against Hindutva politics, was one of the speakers.

The programme was held at the Raghavendra Mutt in Sirsi, where the actor allegedly criticised BJP’s Uttara Kannada MP Anantkumar Hegde. Angered by Prakash Raj’s statement against the BJP leader, the saffron party’s Yuva Morcha made a show of it by going to Raghavendra Mutt and sprinkling cow urine on the dais.

They further claimed that not just the venue, but all of Sirsi needed to be ‘purified’.

“These people are self-proclaimed, pretend and left leaning intellectuals, and have conducted a programme at a religious place and made it impure. He has spoken against our leader as well. That’s why we purified the place with gau mutra,” Vishal said.

Going on a rant, he went on to say that the Mutt was made impure as people who ‘eat cow meat’ and those who are ‘anti-Hindu’ had entered it.

“Hindus consider the cow to be holy and they pray to the cow. The entry of people who eat cow meat and those who are against Hindu gods into Sirsi has made the entire city impure. Even considering people who cause trouble to the society is a sin. The society will not condone such acts. That’s why we decided to purify the place with cow urine,” Vishal said. (Watch video in the end)

Reacting to the incident, Prakash Raj put out a tweet, asking whether the leaders were going to ‘purify’ every place he went to from now on. 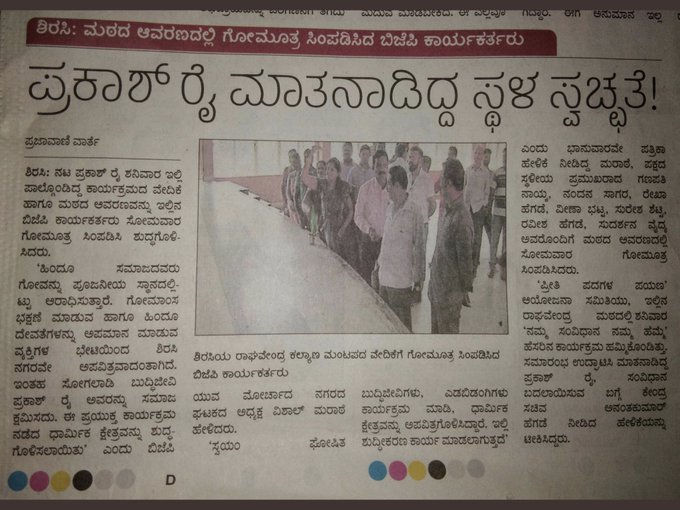 BJP workers cleaning and purifying the stage ..from where I spoke in Sirsi town …by sprinkling cow urine (divine gomoothra)…

…will you continue this cleaning and purification service where ever I go….. #justasking

The actor has been outspoken in his criticism of BJP leaders including Narendra Modi and Amit Shah. In October, he claimed that Uttar Pradesh Chief Minister Yogi Adityanath was a better actor than him.

More recently, he sent a legal notice to BJP MP Pratap Simha for making derogatory and personal remarks against him. He also criticised MP Anantkumar Hegde for linking nationalism and Hindutva in a recent speech.

The actor, in December last year, questioned Anantkumar Hegde on a statement he had made about Hindutva and Nationalism being one and the same. 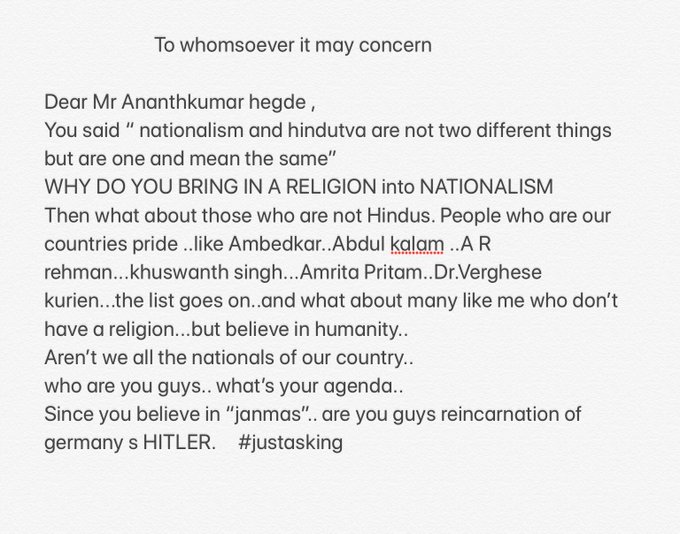 Mr..minister what do you mean when you say “nationalism and hindutva”are one and mean the same …#justasking

In a speech made in Belagavi on the occasion of Ambedkar’s death anniversary on December 6, Prakash Raj had said, “To say that nationalism and Hindutva are one and the same is the new blind belief.