Pasmanda movement works for the annihilation of caste and broad regeneration of democracy. As a  democratic movement it is opposed to all right wing and communalist forces and organizations, including RSS , Bajrang Dal, Jamaat-e-Islami, Popular front of India and so on. 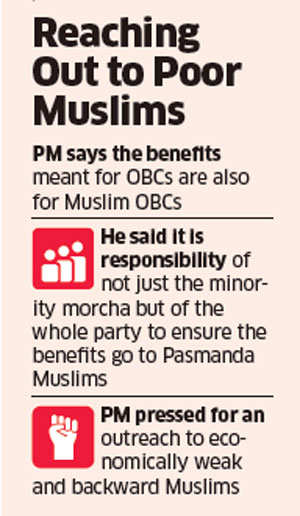 It is true that BJP  is aggressively wooing the pasmanda communities. Since none of the secular/social justice parties have accommodated the Pasmanda demands so far, in fact not even registered the existence of the Pasmanda category, BJP has the first mover’s advantage in this regard. If  BJP  persists in its policy then there is a possibility of a significant pasmanda vote sliding towards it. This becomes more glaring because most of the secular parties are not immune from the charge of fomenting/abetting communal riots when they were in power.

If Pasmanda votes shift towards bjp then the onus must be placed primarily on the champions of secularism and social justice not on the pasmanda communities.
Like all communities there are politically ambitious individuals and organizations within the Pasmanda communities as well who may align with right wing forces for their personal benefits. No community is immune from this trend. Shazia Ilmi, M.J Akbar, Shahnawaz Hussain, Najma Heptullah, Udit Raj, Ramvilas Paswan, Anupriya Patel, Swami Prasad Maurya, Upendra Kushwaha, etc., are illustrious examples.
In the conference of Backward Muslims organized by  BJP’s  Mr. Sabir Ali on May 9 only about 2000 Pasmanda muslims from Bihar, U.P , Delhi and other states attended. none of the key pasmanda leaders were present in the conference and the strength was miniscule when compared to the total population of pasmanda muslims in these states.

There are reports that  Mr. Sabir Ali  is a Muslim Thakur and therefore not a pasmanda. His caste ‘thakurai’ got into the OBC list due to Laloo’s Ashraf appeasement just like high caste ‘mallicks’ were inappropriately included by Nitish government subsequently.

On the same day when this conference happened  our PM Mr Modi also met a delegation of  Jamiat-e-Ulema hind, an Ashraf organization, in Delhi. The Catholic Priests have met Mr Adityanath  Yogi in lucknow recently. A few years back  SIO (Students Islamic Organisation)  had invited  Mr. Indresh Kumar, a member of  RSS  to a conference in Bhu. So such events must be placed in their proper context and interpreted without a prejudiced mind.
Any Government, including right wing ones, are constitutionally expected to address the concerns of all citizens. If the Pasmanda communities face any issue—symbolic or economic—they are within their rights to approach the government of the day for redressal. Pasmanda movement believes in engagement and not withdrawal from the state. So they will engage with both the BJP  government at the centre and U.P .

However, the Pasmanda movement will continue to oppose fascist and Manuwadi forces just like all major Dalit, left and Progressive/democratic forces do. But. the people are open to other negotiations and influences and their electoral behavior cannot be really predicted.  In Uttar Pradesh  2017 a significant number of dalit and OBC  votes went to the Bjp (the savarnas obviously supported the BJP wholeheartedly).

Should we merely blame the voters for this without understanding what made the BJP  attractive to them? If secular/social justice parties continue with their slumber with regards to Pasmanda muslim  demands then a significant shift of Pasmanda votes may happen towards bjp in 2019 general elections. In such a scenario should the Pasmanda voters be held responsible for that?

If  the answer to this question from the secular/social justice camp is affirmative then they must simply pack up their bags and exit politics altogether.