Across India, once small trading towns are transforming into bustling centres, as global companies flood in to set up call centres, factories and software development branches, eager to capitalise on high skill-sets at low labour prices. India’s cities are expanding ever outwards to accommodate an expected 600 million people by 2030, when over 40% of the country’s population will live in urban areas – compared to just 10% a century ago. But this miraculous metropolitan boom comes at a price.

On the outskirts of Hyderabad, the sprawling capital of the southern Indian state of Andhra Pradesh, thick clouds of smoke hang above a primal scene of bare-footed workers clambering atop kilns, hacking at mounds of clay and hauling heavy loads. This is just one of over 150,000 brick production units in the country, which together employ an estimated 10 million workers, churning out the building blocks of the new offices and apartments, factories and shopping malls. All told, India’s brick industry – the second largest in the world after China – contributes around £3bn to the country’s economy every year. Not that the workers see much of that.

“It’s modern-day slavery,” says Andrew Brady, of Union Solidarity International (USI), a UK-based NGO that has been campaigning to improve the brick labourers’ conditions over the last two years. “Entire families of men, women and children are working for a pittance, up to 16 hours a day, in terrible conditions. There are horrific abuses of minimum wage rates and health and safety regulations, and it’s often bonded labour, so they can’t escape.” 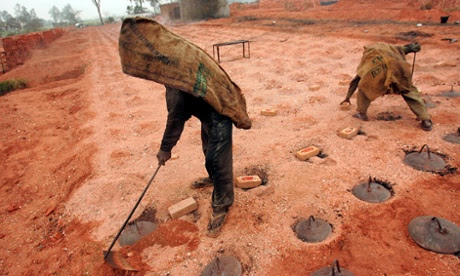 Workers stand on the kilns after closing the opening of a brick kiln and throwing firewood inside. Photograph: Harish Tyagi/epa/Corbis

The six-month production season is now beginning, when tens of thousands of families flock to work in the brick kilns of Andhra Pradesh, mostly travelling from the state of Orissa. A report by the BBC this week discovered children as young as four smashing coal to fuel the kilns, and stories of labourers having their hands cut off when they tried to leave their jobs. The report found workers forced to produce over 1,500 bricks every day, paid in advance and only able to leave after six months, along with children suffering from severe respiratory problems.

“They are forced to lead sub-human lives,” said Dr Vamsi Vakulabharanam of the University of Hyderabad. “It’s a condition that the entire world should condemn, but multinationals are buying into this.”

New guidelines for multinationals, introduced in 2011 by the United Nations and the Organisation of Economic Cooperation and Development, specify that such companies should have direct responsibility for human rights abuses anywhere in their supply chains. But little is being done to enforce these regulations.

“Any company that opens premises in India is potentially liable,” says Brady. “It’s not like specific abuses in the garment sector – any and every industry using new buildings in India should be under scrutiny. They need to be aware it is a pandemic problem across the country.” 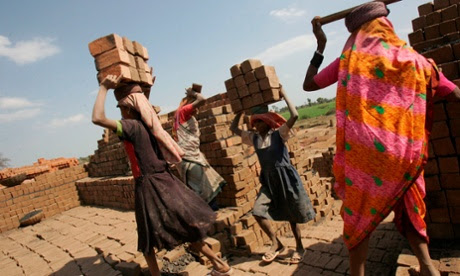 The brick quotas are set so high that workers often have to involve their entire family to meet the targets. Photograph: Harish Tyagi/epa/Corbis

The Blood Bricks campaign, which launches next week, is the latest chapter in USI’s work to force international attention on the issue. In partnership with Indian human rights group, Prayas, they have been working to organise brick kiln workers into unions, an initiative that has already seen 70% wage rises in some areas. But Brady insists that much greater international pressure is needed, as local labour regulations continue to be flouted.

The campaign comes after the Observer’s recent revelations of horrific labour abuses on Abu Dhabi’s new pleasure island of Saadiyat, where new outposts of the Louvre and Guggenheim museums are under construction. The investigation discovered thousands of workers living in squalid conditions, passports confiscated and trapped until they paid back hefty recruitment fees.

“It’s a world-wide issue,” says Brady. “We’re merely using India as the example, but we’ve seen the same abuses with projects in Qatar and Brazil for the World Cup and Olympics – iconic projects built on the back of the blood and sweat of bonded labour. It’s time to put an end to this trade in blood bricks.”

The "Compelled Free Consent ' in #Aadhaar is a contradiction in terms #UID
#India - For your #biomerics #UID - do the Eyes really have it? #Aadhaar
Rehab of Silicosis sufferers only on papers; SC stern on MP govt, seeks reply in a week
27 judges, sitting & retired, get High Court notice for plots they got from Gujarat govt