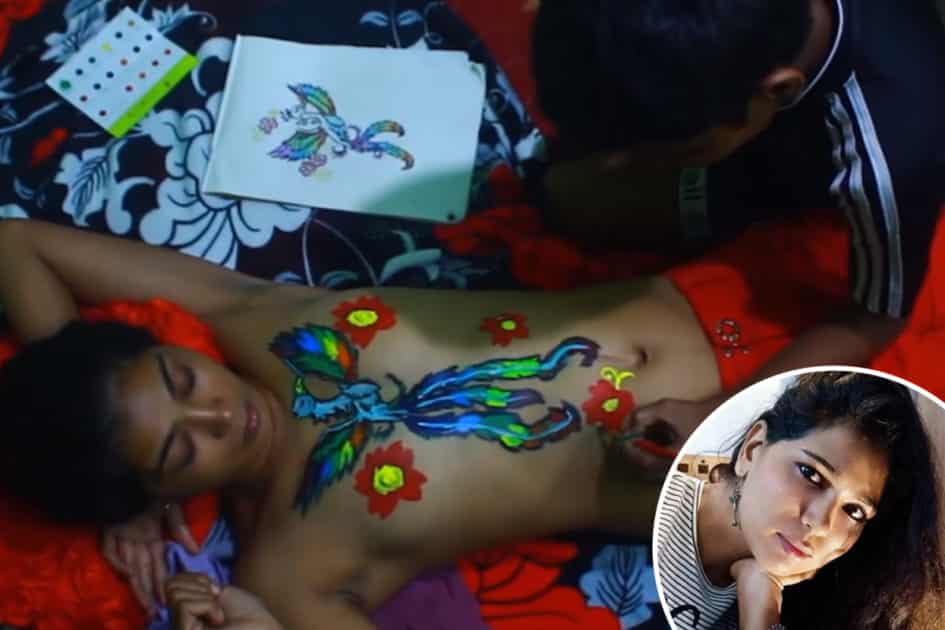 Rehana Fathima was booked under various sections of POCSO Act for making her children paint on her semi-naked body and posting a video of the same on social media.

Kerala based controversial activist Rehana Fathima, who shot into the headlines when she tried to enter the Ayyappa temple at Sabarimala two years ago, was charged under the Information Technology Act and the Protection of Children from Sexual Offences Act. She then shared a video of it on social media saying that women should not be shy with their bodies and sex education of children would ensure that they would look at women differently when they grew up.

The case was registered in Thiruvalla in Pathanamthitta district of the state after a complaint was lodged against her by a BJP leader after the video had gone viral. In light of this, she applied for anticipatory bail to the court. She posed semi-nude in front of her two minor children and asked them to paint on her body.  The author examines the court’s order rejecting her bail application.

Way back in 2006, a Supreme Court Bench passed an order against Zahira Sheikh, a key witness in the 2002 Gujarat riot cases for a change in her statement.  While writing the judgment sentencing her to one year’s simple imprisonment and a cost of Rs. 50,000, Justice Arijit Pasayat, started his judgment with a quote from “Manu Samhita” about the virtues of dharma and truth.

I had the opportunity of hearing eminent jurist Dr.Upendra Baxi who was critical of that judgment on many counts.  One of the objections Dr.Baxi mentioned is the Judge citing ‘Manu Samhitha’ to a Muslim woman.  “Why not a verse from Holy Quran, since she is a practicing Muslim?”, wondered Dr.Baxi.

Though these citations from religious texts, may look harmless to a commoner or a follower of that religion, it has deeper dimensions.   It reflects the “inarticulate major premise” of the judge who is hearing the case.

“Inarticulate major premise” is a term coined by Oliver Wendell Holmes Jr after his famous book, “The Common Law”.   Holmes explained: “The life of the law has not been logic: it has been experience. The felt necessities of the time, the prevalent moral and political theories, intuitions of public policy, avowed or unconscious, even the prejudices which judges share with their fellowmen, have had a good deal more to do than the syllogism in determining the rules by which men should be governed.”

“It reflects the “inarticulate major premise” of the judge who is hearing the case.”

Granting bail (including at the pre-arrest stage) to a person accused of an offence is an area where our Judges exercise vast discretionary powers.

Bail is the rule and jail is an exception, cautioned Justice V.R.Krishna Iyer in late 1970s. This has not been followed in a large number of cases.

Take for example the case of Dr.Binayak Sen, the award-winning doctor who had been selflessly working for several years in the rural areas of Chhattisgarh. He was convicted on charges of sedition and criminal conspiracy. Ultimately in 2011, when Supreme Court granted bail to Dr.Binayak Sen, Justice Krishna Iyer lamented that this was the “finest hour of under-trial justice”.  Justice Krishna Iyer hoped that “the courts of India hereinafter will be liberally generous in the grant of bail.”

The hope expressed by J.Krishna Iyer was not realised in several subsequent deserving cases. A large number of undertrial prisoners are languishing in Indian jails from Kashmir to Kanyakumari.

The Order of Kerala High Court on July 24 in Rehna Fathima’s bail application is the latest example as to how the Judges deviate from the path articulated by great Justice Krishna Iyer.

The Petitioner, Rehna Fathima, an activist who was fighting against body discrimination, asked her two children aged 14 and 8 to paint on her body that was naked above the naval.  She recorded a video of it and uploaded in YouTube with a comment:“Body art and the politics”.  She wrote, among other things:  “… Tomorrow, when their partners are worried about their bodies becoming too sturdy and sexy if they need to confidently tell that this naturality is your real beauty. They have to grow up seeing the natural women bodies. These seeds need to be sown when they are young with proper sex education as well as sexual consciousness. No child who has grown up seeing his mother’s nakedness and body can abuse another female body. Therefore, vaccines against these false perceptions and expectation about women’s body and sexuality should be initiated from home itself.”

“An expression of an opinion, with no overtones of vulgarity, should not be a cause of concern for the police.”

Every citizen has a right to free speech and expression. An expression of an opinion, with no overtones of vulgarity, should not be a cause of concern for the police.  However, a crime was registered in the police station for alleged offences under various sections of Protection of Children from Sexual Offences Act,2012 (‘POCSO’) and Information Technology Act, 2000.

Her application for bail came up before the Kerala High Court.  While rejecting the bail application, the learned Judge of the High Court has discussed the merits of the matter and took great pains to explain as to how her conduct was not ideal.   There is, however, no discussion on the jurisprudence of bail.  This is a problematic approach and in sharp deviation from the catena ( series of related things) of Supreme Court judgments which cautioned the Judges dealing with bail matters not to enter into the merits of the case. There is one reason, it should not prejudice the accused in the trial which is yet to begin.    After discussing the merits, the learned Judge here mentioned that those discussions should not come in the way of a fair trial and those are only for deciding the bail.   The relevant questions the Judge ought to have asked are whether there is a chance that the accused would jump the bail if she was granted it and whether custodial interrogation is necessary at all?  Those questions were neither raised nor answered in the Order.

The Judge finds no fault in painting on the naked body of the Petitioner had it been within the four walls of her house but uploading the video is not permissible.  One is left to wonder how…

The most dangerous part of this “judgment” is in the last five pages.   There is a long lecture as to the exalted position of a “mother” in our society.   Stereotyping women as a tolerant mother has been the long practice of our patriarchal culture.  After such exposition of the role of an ideal mother, the learned Judge cites Manu Smruti and Holy Quran to this bail petitioner.

“The judgment citing Manu Smruti and Holy Quran to a fiercely independent woman who defied societal norms is as bad as the Supreme Court citing Manu Samhita to Zahira Sheikh.”

Rehna Fathima was once expelled from Islam, the faith into which she was born, by the conservatives therein after she antagonised their counter parts in the Hindu religion.  This was after her failed attempt to enter Sabarimala temple after the Supreme Court judgment.

The judgment citing Manu Smruti and Holy Quran to a fiercely independent woman who defied societal norms is as bad as the Supreme Court citing Manu Samhita to Zahira Sheikh. Both these judgments are the outcome of the misunderstanding of the role of a Court.  The learned Judge has forgotten that the party approaching the Court is an equal citizen, like any Judge or other public servant, in a democratic setup. She perceives the Court as a service provider, not as a moral preacher.

(Prashant Padmanabhan is an advocate in the Supreme Court. Views are personal.)