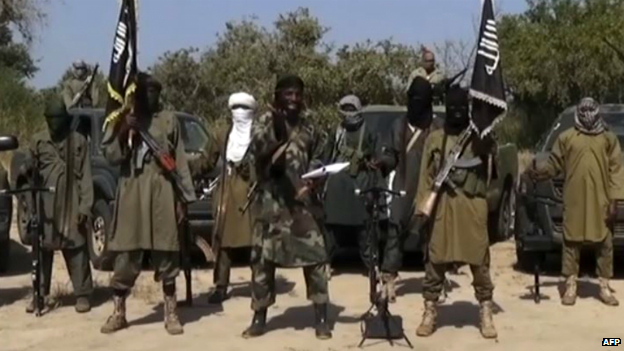 Bodies lay strewn on the streets of a key north-eastern Nigerian town following an assault by militant Islamists, officials have told the BBC.

The Boko Haram group attacked Baga town on Wednesday, after over-running a military base there on Saturday, they said.

Almost the entire town had been torched and the militants were now raiding nearby areas, they added.

Boko Haram launched a military campaign in 2009 to create an Islamic state.

It has taken control of many towns and villages in north-eastern Nigeria in the last year.

The conflict has displaced at least 1.5 million people, while more than 2,000 were killed last year.

Musa Alhaji Bukar, a senior government official in the area, said that fleeing residents told him that Baga, which had a population of about 10,000, was now “virtually non-existent”.

“It has been burnt down,” he told the BBC Hausa service. 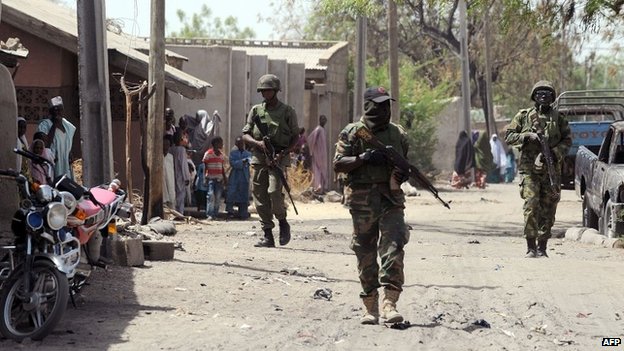 Government troops were overpowered during Saturday’s raid on Baga 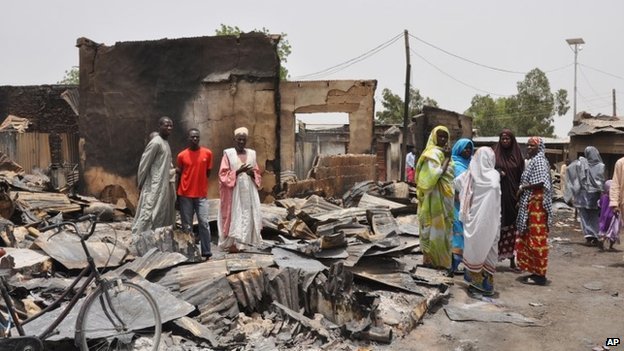 The group has torched many towns and villages in northern Nigeria

Those who fled reported that they had been unable to bury the dead, and corpses littered the town’s streets, he said.

Boko Haram was now in control of Baga and 16 neighbouring towns after the military retreated, Mr Bukar said.

While he raised fears that some 2,000 had been killed in the raids, other reports put the number in the hundreds.

Mr Lawan, the senator for northern Borno, called on government troops to stop “dilly-dallying” and to fight back to protect residents.

“The indiscriminate killings went on and on and on,” he told BBC Focus on Africa.

Boko Haram’s offensive continued on Thursday, with its fighters setting up checkpoints and killing people who were hiding in the bush, the senator said.

Fleeing residents spoke of the stench of rotting corpses on the streets and surrounding bushes, he said.

Boko Haram at a glance

Who are Boko Haram?

Why Nigeria has not defeated Boko Haram

Some 10,0000 people had fled to Chad since Saturday to escape the violence, raising fears of a humanitarian crisis, Mr Lawan said.

A large number reportedly drowned as they crossed Lake Chad.

Others are fleeing to Maiduguri, the capital of Borno, in buses provided by the government, the senator said. 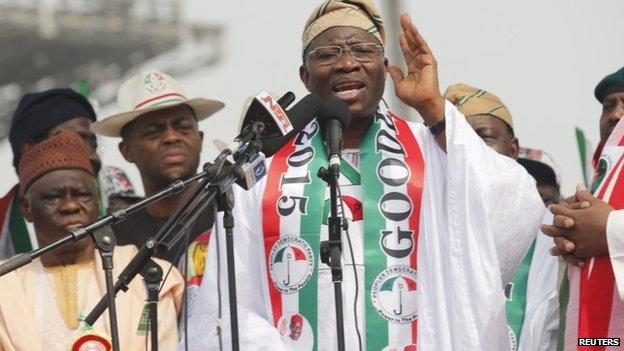 Mr Jonathan is under pressure over the insurgency

While President Goodluck Jonathan, who is seeking re-election next month, has condemned the attack on a French satirical magazine in Paris as dastardly, he has not commented on the violence at home, our reporter says.

Government troops abandoned the military base in Baga on Saturday.

It hosts the Multi-National Joint Task Force (MNJTF), made up of troops from Nigeria, Chad and Niger, although only Nigerian soldiers were there at the time of the attack.

Set up in 1998 to fight trans-border crime in the Lake Chad region, the force more recently promised to take on Boko Haram.

Mr Jonathan declared a state of emergency in Borno and two neighbouring states in 2013, vowing to defeat the militants.

However, Boko Haram has stepped up attacks since then and there are fears that many people in the north-east will not be able to vote in the general election because of the conflict.