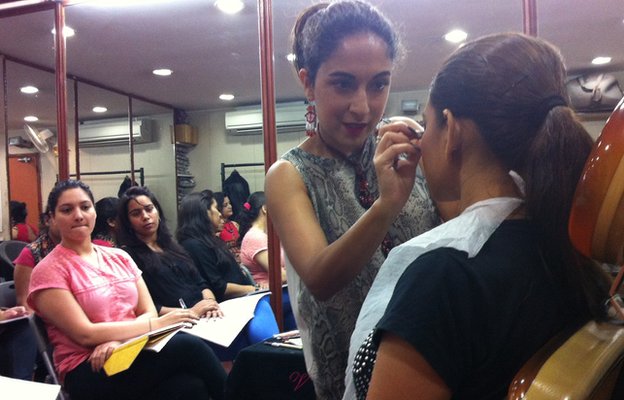 India’s Supreme Court has said that a 59-year-old union ban on female make-up artists in the country’s film industry is illegal and must be lifted.

Two judges said the gender discrimination was unconstitutional. A powerful trade union has long argued that men needed the jobs.

Women may work as hair-stylists on film sets but any who have tried to do make-up were threatened or even assaulted.

India has one of the world’s biggest movie and TV entertainment industries.

“How can this discrimination continue? We will not permit this. It cannot be allowed under our constitution. Why should only a male artist be allowed to put make-up?” Justices Dipak Misra and UU Lalit were quoted as saying in the Indian Express newspaper.

“We don’t see a reason to prohibit a woman from becoming a make-up artist if she is qualified.”

Even top directors and actors couldn’t break the rule that women couldn’t be make-up artists. One actress I spoke to said it wasn’t comfortable for women to get their body make-up done by men, but they really had no choice.

Producers who defied this rule had to pay hefty fines and artists were denied credits on the film titles. Women make-up artists were sometimes brought on the sets surreptitiously, hidden in mobile beauty salons known as vanity vans for fear that if the trade unions got wind of it the production would be brought to a halt.

The livelihoods of thousands of women make-up artists have been affected. Instead of doing the work of their choice, they’ve been restricted mainly to weddings and fashion shows – but Bollywood is the bigger business to be in and the Supreme Court’s move should finally end this gender bias.

The court told India’s Cine Costume Make-up Artists and Hair Dressers Association to end its ban on female make-up artists immediately – or it would order it to do so.

One of the petitioners, Charu Khurana, said she had learnt make-up from a school in California, but she was barred from working in Bollywood.

“I have worked on a couple of films but it has been tough. The unions are strong and come to the set to stop the film [when they find out that women make-up artists have been employed]. Producers have to pay fines,” Ms Khurana told the BBC.

“Lots of women make-up artists want to work in the films. And female actors would also find it convenient and comfortable if their make-up was done by a woman,” she said.

Most women who are trained in make-up end up working for fashion shows and commercials and doing bridal make-up for a living.

The court gave the union a week to respond. A final hearing is to take place on 17 November.