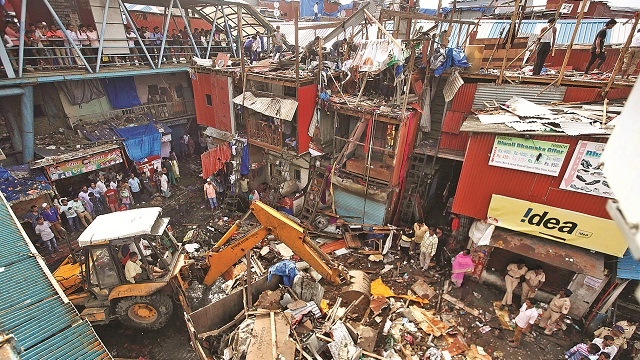 Remaining part of Garib Nagar being demolished by Railway

In a major setback to BMC which ruthlessly demolished Garib Nagar-a slum without following due procedure of law, the Bombay High Court, today ordered the civic body to maintain status quo.

Garib Nagar apart from being a residential site for poor working class of Mumbai was also source of livelihood for a number of garment workers. The demolition of this areas shattered the lives of many. No doubt being a Muslim majority settlement, Garib Nagar also have a shadow of stigmas. The demolition was being undertaken in keeping with a Bombay High Court order to remove all shanties along the Tansa water pipeline.

The evicted residents of Garib Nagar complaint that the BMC did not give them enough time to save their belongings and move to a safer place. The civic body issued a mandatory 48 hours’ notice asking residents to vacate the area, however it came down to demolish the slum next day-merely after 15 hours—before the expiry of the notice. A major fire occurred during the demolition. Residents, who are also facing charges of causing fire to stop eviction, claim that it is quite possible that a gas cylinder might have busted in any of the houses that were not vacated at all. Though there was no causality but a heavy loss of property. As this was not enough, the BMC, without letting the evicted residents recover from the tragedy or providing meager relief, continued demolition of the remaining part of the slum after three days.

The land on which Garib Nagar was built is owned partly by BMC and partly by Railways. So soon after the status quo was declared by the HC, the Railways started demolishing the remaining shanties in their part of the land as BMC had already demolished the structures built in their part. Even the Railways carrying out demolition without issuing the mandatory eviction notice.

Garib Nagar got attention given a major fire however, a large number of slums are under threat of eviction or getting demolished a daily basis in Mumbai. These incidences go unreported.  Spaces for poor getting shrunk in Mumbai and other major cities amidst claims of ‘Housing For All’.

Strong evidence to link RF radiations to various health disorders: Bioinitiative Report
CPDR condemns the hounding of Teesta Setalvad & Javed Anand and demands for a CBI scrutiny of foreig...
US agency confirms suspension of India clinical trials
Many unorganised workers’ accounts not Aadhar-linked, e-SHRAM shows, may not be getting subsidies