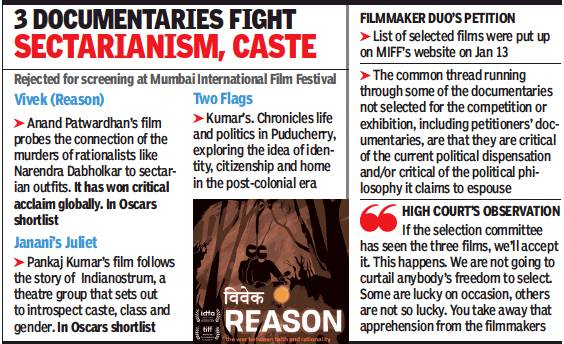 The Bombay high court on Friday called for records pertaining to the selection process of three documentaries at the Mumbai International Film Festival (MIFF) after a petition alleged that the three were rejected as they are critical of the Centre. The festival is to be held from January 28 to February 3.

The petition was by awarding-winning documentary filmmakers Anand Patwardhan and Pankaj Kumar, urging the HC to direct MIFF, the Films Division of India, and the Union ministry of information & broadcasting to screen their documentaries.

The petition states that Patwardhan’s film Vivek (also titled Reason) covers the murders of rationalist Narendra Dabholkar, Communist leader Govind Pansare, Kannada writer MM Kalburgi and journalist Gauri Lankesh, investigating the connection of these crimes to sectarian outfits. It states that it also looks at the violent attacks on Muslims and Dalits in the name of cow protection, caste-based discrimination that led to the suicide of student leader Rohith Vemula at Hyderabad University, and “numerous other outbursts of violence… connecting them to present an overview of the turmoil that India is presently witnessing”.

Pankaj Kumar’s Janani’s Juliet follows the story of a Puducherry theatre group, which disturbed by a spate of honour killings, sets out to introspect the implications of caste, class and gender. His other entry, Two Flags, chronicles the life and politics of Puducherry.

Senior advocate Mihir Desai, for the duo, said in court, “We don’t know if they were viewed and rejected or not viewed at all. Out of the three films, two were shortlisted for the Oscars… According to me, they have been rejected because they are critical of the ruling dispensation.”

Additional solicitor general Anil Singh and advocate Advait Sethna, representing the Films Division and the I&B ministry, said the filmmakers had agreed to abide by festival regulations and participated in the selection process till the results were out. “Now, at the fag end, when the film is not selected, you file a petition challenging the regulations,” said Singh.

The bench, of Justices Satyaranjan Dharmadhikari and Riyaz Chagla, referred to Patwardhan’s earlier challenges to “arbitrary restrictions” on his films and ensuing landmark judgments. The judges remarked that Patwardhan’s works were kept away even during non-BJP governments. “He is apprehensive because of the content. (That) the content (will not be) allowed to be exhibited at all,” said Justice Dharmadhikari.

To a court query, Singh replied, “We have viewed all the films for their presentation, treatment, technology and overall impact.” The judges said selection process records of the three films in question must be produced on Monday. “If the selection committee has seen them, we’ll accept it. This happens. We are not going to curtail anybody’s freedom to select,” said Justice Dharmadhikari. Singh said an expert body of filmmakers selects films. “Some are lucky on occasion, others are not so lucky. You take away that apprehension from them (the petitioners),” said Justice Dharmadhikari.