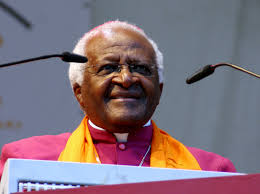 The Sri Lankan government, which defeated separatist Tamil Tiger rebels in 2009, is under increasing pressure from the international community to try those responsible for rights abuses during the nearly three-decade-long conflict.

“If there are enough reasons to suggest that the Sri Lanka government have not been doing things with integrity, I think the world has to apply all the screws that it can,” Tutu told a select group of journalists during a visit to New Delhi.

“And a boycott of the CHOGM could be one of them.”

Canadian Prime Minister Stephen Harper has already said he would boycott the Commonwealth Heads of Government Meeting (CHOGM) which Sri Lanka is hosting on November 15 to 17.

At the same time, Tutu said it was important to know what Tamils themselves felt about a boycott.

“I am saying ‘Yes, maybe they (the heads of governments) shouldn’t go’ and I would be guided what the Tamils there would be saying on the issue,” added Tutu.

Tutu, 82, won the Nobel Peace Prize in 1984 for speaking out against white minority rule in South Africa and supported the economic boycott of country during the apartheid era.

He is chairman of The Elders, a group of prominent former world leaders which was started by Nelson Mandela to advocate on humanitarian issues.

Groups such as Human Rights Watch and Amnesty International have called on the 53 Commonwealth heads of government, which include Britain and its former colonies, not to attend, or to send a low-level delegation, to the Indian Ocean island.

Harper said last month he was disturbed by on-going reports of intimidation and incarceration of political leaders and journalists, harassment of minorities, reported disappearances and allegations of extra judicial killings. But he is the only Commonwealth leader to plan a boycott of the biennial meeting.

Prime Minister David Cameron is to attend, despite protests from Tamils in Britain, adding that he would raise human rights issues with Sri Lankan President Mahinda Rajapakse.

Neighboring India, with a major Tamil population, is also under pressure to boycott the meeting, but Prime Minister Manmohan Singh’s office has not yet made a final decision.

The main political party representing Tamils in Sri Lanka says it welcomes Canada’s decision not to attend the event.

“We have taken a position that Sri Lanka is in breach of fundamental values of the Commonwealth,” said M.A. Sumanthiran, a member of the Tamil National Alliance party, which won 30 out of 38 seats in landmark polls in the Tamil-dominated Northern Province in September.

“We appreciate the call by various people that it must be boycotted,” he told Reuters.

As many as 40,000 civilians were killed in the last months of the conflict, as government troops advanced on the last stronghold of the rebels fighting for an independent homeland, a U.N. panel said in 2011.

It blamed both Sri Lankan troops and the Tamil Tigers for atrocities, but said the army was mostly responsible.

The U.N. Human Rights Council has urged Sri Lanka to allow an independent body to investigate the alleged war crimes.

Colombo has rejected the allegations and resisted pressure to allow an independent commission to investigate its military, saying a range of recommendations made by its own reconciliation body are being implemented.

Political violence has eased since Sri Lanka crushed the rebellion, but international rights groups say rule of law problems persist, including abductions and attacks on media and government critics.