The Brazilian supreme court has ruled in favour of two tribes in a case that is being hailed as a significant victory for indigenous land rights.

The unanimous decision – which went against the state of Mato Grosso do Sul – settled a dispute over land traditionally occupied by indigenous people and ordered the authorities to respect the demarcation of land.

Amid increasing conflict over land and diminishing rights for indigenous people in the country, the south-western Brazilian state had sought compensation of about 2bn reais (£493m) from the Brazilian government after land was declared as the territory of the Nambikwara and Pareci tribes.

A third case, involving Rio Grande do Sul state, was adjourned for 15 days. 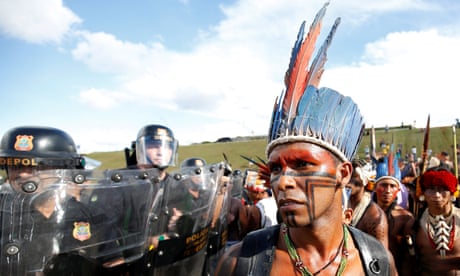 “This is an important step towards achieving justice for indigenous people in Brazil,” said Tonico Benites, a Guarani leader. “This gives us hope the judiciary will protect our rights, which are guaranteed by the constitution and international law.”

Activists had feared judges would uphold a recommendation from the attorney general’s office that any tribe not occupying its ancestral land when Brazil’s new constitution came into force on 5 October 1988 would lose its right to live there – a time limit that had been called the worst blow to indigenous rights since the military dictatorship ended in 1985.

But Sarah Shenker, a campaigner with Survival International, said feelings were running high in Brazil against indigenous rights: “If the judges apply the same thinking in the third ruling, in theory [indigenous] land rights should be protected. But there is such a strong anti-indigenous campaign in Brazil at the moment that we have to be very careful.”

Benites said indigenous leaders would now work to overturn the 1988 cut-off date – a plan signed by President Michel Temer last month and which critics claim is to win favour with the powerful agribusiness lobby, known as the ruralistas.

The deadline would not only halt new demarcations of indigenous land but also legitimise claims by ranchers and wealthy farmers who have long coveted Indian territories.

“It is a very cynical move,” said Juliana de Paula Batista, a lawyer working with the Socio-environmental Institute in Brasilia. “Since many indigenous people were violently expelled from their ancestral land in the colonial and military eras, they could not possibly have been living on this land in 1988.”

Campaigners have claimed Temer is using land rights as a bargaining chip to shore up his unpopular government.

Luiz Henrique Eloy Amado, a lawyer for Brazil’s Association of Indigenous Peoples (Apib), said: “The Temer government wants to remain at all costs, which requires the votes of the ruralista bloc.”

The attorney general’s recommendation of a time limit was greeted as a triumph in a video by ruralista federal deputy Luiz Carlos Heinze, potentially resulting in the dismissal of 90% of ongoing indigenous land claims. Hundreds of indigenous territories around Brazil are awaiting demarcation.

The Guarani-Kaiowás occupy only a fraction of their ancestral territories in Mato Grosso do Sul and their decades-long struggle has caused violent conflict with cattle ranchers and soy and sugar cane farmers.

Fiona Watson, director of campaigns for Survival International, estimated that 45,000 Guarani-Kaiowás would lose rights to land under the proposed cut-off point, as would other tribes across the south and north-east.

In the present climate in Brazil, anything can happen

The 1988 deadline, the marco temporal, has triggered major protests across Brazil, organised by the Apib under the banner: “Our history did not start in 1988, no to the time limit”. Hundreds of people converged on Brasilia for the supreme court ruling on Wednesday.

Last week, 48 indigenous organisations and civil society bodies signed a letter to the UN high commissioner for human rights and the Inter-American Commission on Human Rights, denouncing violations since the 2016 visit of UN special rapporteur Victoria Tauli-Corpus, who noted a “worrying regression in the protection of indigenous people’s rights”.

Brazil has experienced a rise in homicides related to rural land disputes, with 37 people killed in the first five months of this year, eight more than died over the same period in 2016, according to the Pastoral Land Commission, a non-profit group.

Eliseu Lopes, a Guarani leader from Mato Grosso do Sul, expressed relief at the outcome: “The land conflict is already killing us. Imagine what it would be like if the proposal were approved,” he said. “It would legitimise the violence against us. The vote doesn’t solve all our problems, but it gives us some breathing space.”

Centre has its eyes set on NE resources, not on people’s woes
Yakub Memon #DeathPenalty - Justice or vengeance?
No justice in sight for Iraqi victims of alleged murder, rape, and torture
Dalits, Adivasi children locked out of education during Covid-19 lockdown