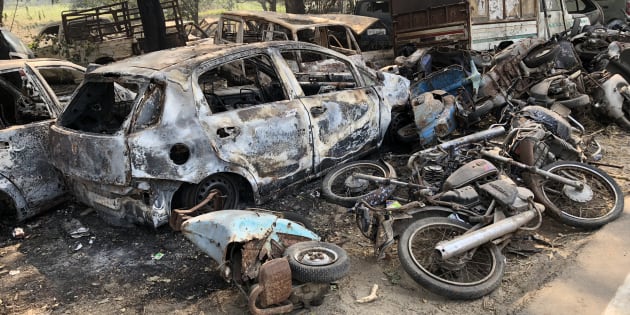 BULANDSHAHR, Uttar Pradesh — Nine eyewitnesses, including two policemen, gave HuffPost India granular details on how the Bajrang Dal, an affiliate of the ruling Bharatiya Janata Party (BJP), orchestrated the mob attack on a police outpost in Bulandshahr district of Uttar Pradesh, resulting in the death of a policeman and a civilian on 3 December.

Station House Officer (SHO) Subodh Kumar Singh was killed as he sought to quickly disperse an angry mob that was primed to attack a small group of Muslim men returning from a nearby Muslim congregation, the policemen who accompanied him said.

Had the mob succeeded in attacking the Muslims, a policeman said, the district would have erupted in a full-blown communal carnage.

“If not for his martyrdom, entire Bulandshahr would be burning now,” said the policeman, who was part of SHO Singh’s posse.

The policemen appeared visibly scared as they spoke and sought anonymity as they feared for their lives and employment.

Their testimonies reveal how the Yogi Adityanath-led BJP government has lost control of the Hindutva forces it once used to enforce its writ.

The violence in Bulandshahr began soon after villagers found cow carcasses in the fields owned by Raj Kumar, a farmer from Mahav village. Raj Kumar, who has since been named as one of the accused in SHO Singh’s death, rushed to the spot and — his family members told HuffPost India — immediately informed the Chingaravati police post about the incident.

SHO Singh, and a small group of police officers, arrived soon after. A policeman present at the spot told HuffPost India that it was clear that the carcasses were of cows killed at a different place and then transported to the area.

But the police were on alert because they knew that tensions were high as lakhs of Muslim men had gathered for a three-day congregation, called Tablighi Itjema, on the outskirts of Bulandshahr.

“The sense that we got after reaching the spot was that cows were slaughtered somewhere else and brought there,” said the policeman who, along with SHO Singh, was amongst the first to reach the spot.

“Kotwal Sahab understood that it was a conspiracy to foment communal tensions in the area as Tablighi Itjema was going on in the district.”

“Kotwal” is the local term for station house officer, the rank held by Subodh Kumar Singh.

Villagers from Nayabass, where Yogesh Raj lived, says the Bajrang Dal leader was a dabangg (rowdy) who would often roam around with a locally made gun.

Singh convinced the villagers to calm down and bury the carcasses, the policeman said, but members of the Bajrang Dal, particularly the prime accused Yogesh Raj — the district convener of the Dal — insisted that the carcasses be loaded in a tractor trolley and taken to the nearest police outpost.

Raj then instigated the crowd to block the highway, the policeman said, prompting fears that they were firing up the mob of Hindu villagers to attack a group of Muslim men returning from the Tablighi Itjema.

“Kotwal Sahab understood their conspiracy and ordered a lathi charge to disperse the crowd,” the policeman said. “Imagine what would have happened if lakhs of Muslims, gathered in the district for Tablighi Ijtema, would have got the news of the attack on these three men.”

Instead, the mob turned on the police. Videos of the incident show young men, armed with sticks and bricks, storming the police compound. At some point in the melee, one of the attackers, named Sumit, was shot in the chest—further enraging the crowd. Sumit eventually succumbed to his injuries, as did SHO Singh.

Villagers interviewed by HuffPost India supported this version of events.

“The police and villagers had reached an understanding that the cow carcasses should be buried somewhere near the village. My brother-in-law offered to bury it in our farm. But it was the Bajrang Dal people who insisted on taking the carcasses to the police post,” said Bina Devi, former village head of Mahav and sister-in-law of Raj Kumar.

Villagers from Nayabass, where Yogesh Raj lived, says the Bajrang Dal leader was a dabangg (rowdy) who would often roam around with a locally made gun.

“He would carry swords during Hindu processions. He was instrumental in removing a speaker from a masjid here,” his neighbour told HuffPost India.

Local leaders have claimed that Yogesh Raj instigated the mob to attack Singh because of his role in the Dadri lynching investigation.

“He instigated the mob and told them that because of the SHO, many Hindus were implicated in the Dadri lynching case. Cow slaughter was a pretext. Basically, he wanted to get rid of Kotwal (SHO),” claimed Lok Dal leader Afaq Ur Rahim Khan, who belongs to Bugrasi, a neighbouring town.

Singh was the investigating officer in the 2015 lynching of Mohammad Akhlaq for a few months before he was transferred. Reports say he played a key role in the accused being arrested promptly.

Among the seven people named in the FIR for cow slaughter are a handicapped man and two minor boys from Nayabass village.

In a video released on Wednesday, Yogesh Raj claimed he was innocent and that he was not even present when Singh was killed.

“If our demand was agreed to and an FIR was being registered (for the alleged cow slaughter), why would we incite violence?” he said in the video.

However, multiple videos of the incident show Raj arguing with the policemen in front of the Chingravati police post.

Yogesh Raj is not without powerful backers. Balraj Donger, the area convenor of the Bajrang Dal, told the accused’s family members in Nayabass not to worry as “whatever he did was for the protection of cow”.

Even Chief Minister Adityanath, late on Tuesday, announced that strict action would be taken against those responsible for the alleged cow slaughter.

The BJP MP from the area, Bhola Ram, has said that Yogesh Raj was doing “noble and eye-opening work”.

“Expressing your support for stricter cow slaughter laws is not a crime,” he said.

The FIR on ‘cow slaughter’

The family members of Raj Kumar, in whose fields the carcasses were found, said they don’t know who killed the cows and how the Bajrang Dal got to know of the carcasses.

“My husband did not call them. Someone else from the village might have called them because my husband did not even know them. My husband never even slapped me, how will he kill a policeman? Everything happened because the Bajrang Dal people instigated villagers. They came from outside,” said his wife Priti.

Over 90% of the population in Mahav village, where the cow carcasses were spotted, is Hindu. Chingravati, where the violence occurred, and Nayabass, Yogesh Raj’s village, are also dominated by Hindus.

A policeman posted at the Chingravati police post after the incident said that it is impossible to kill so many cows near a Hindu-dominated village without being noticed.

“Do you think two or three men could have killed these cows so easily? The animals also resist when it comes to slaughter. Even if the cow slaughter took place, it was done by someone from these villages,” the cop said.

Most of the villagers of Chingaravati, Mahav and Naya Bass claimed that more than half people in the mob which attacked Chingaravati police post on December 3 consisted of outsiders and that very few locals participated it.

A video of the mob violence, which surfaced after the incident, shows the mob moving towards the direction of Bullandshahr after the killing of the SHO.

Mahav and Nayabass are in the opposite direction and only Chingaravati village is in the direction in which the mob moved but the people of Chingravati claimed that only five to six villagers from this village were a part of this mob out of which one was killed.

“We were only demanding an FIR in cow slaughter. We were not involved in the violence. Why would we do that when our demand was accepted? Did we do cow slaughter? Why would we do that? If we had to create tension in the area, there are other ways to do it. Why would we kill a cow? We could have killed any other animal and thrown it in Masjids if we wanted to create trouble here. The SHO should not have been killed. But the first incident was the cow slaughter for which the Bajrang Dal was insisting on filing an FIR. Then there was a blockade of the road. Yogesh Raj reached police station at 12.43 pm and left at around 1.20 pm. The SHO was killed at 1.35 pm. The police are deliberately plotting to implicate him in this case,” Bajrang Dal leader Pravin Bhati told HuffPost India when asked about allegations against the Bajrang Dal