Every house that News18 visited said that there were no female constables during the exercise. None of the senior police officials News18 reached out to commented on the late-night raids.

Women outside the house of main accused Yogesh Raj in Bulandshahr on Wednesday. (Photo: News18)

Bulandshahr: Almost 30 policemen looking for the men named in the Bulandshahr mob violence FIR reached the homes of the accused in the early hours of Tuesday and allegedly thrashed their wives and sisters and vandalised property.

Most of the accused were not found at home when the police raided their place.

“I received a call early in the morning by my neighbours. They said policemen had beaten up my daughter-in-law and had destroyed everything in my house. I rushed back to find her left hand almost fractured and her left leg seriously bruised. We had to shift her to Meerut in a hurry. They were looking for my son,” said Ratan Kaur, mother of Jitendra Malik.

Malik, 24, had recently enrolled in the Army and was posted in Srinagar, his mother said. He is a resident of Mahaw village in Bulandshahr and has been named in the FIR for mob violence that also has charges for murder and attempt to murder.

“They broke the TV, washing machine, smashed window panes, destroyed the fridge and pulled down everything in the kitchen,” added Kaur. News18 visited the house to find it completely vandalised. 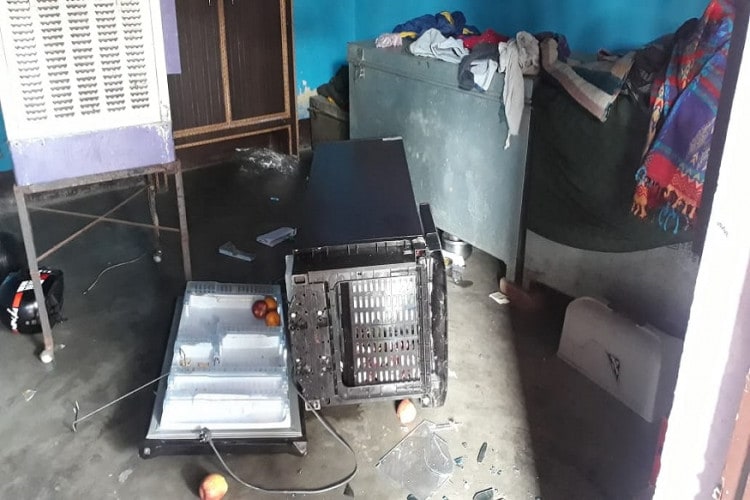 The policemen allegedly vandalised the homes of the accused after not finding them inside. (Photo: News18)

A violent clash between the police and villagers of Mahaw on Monday after a mob turned violent in an alleged case of illegal slaughtering of cattle, resulted in the death of station house officer (SHO) Subodh Kumar Singh, 47, and a youngster.

The autopsy report of the SHO revealed that he was shot in the head. The FIR prepared by Bulandshahr police named 28 and included 60 unidentified individuals in the list. Eight of the accused belong to right-wing outfits like the Bajrang Dal, VHP and the BJP youth wing.

The story of roughing up and vandalising continued in every house that the police visited.

“It was at around 1 am when I heard loud banging on our door. It was just me and my younger son in the house as my husband, Rajkumar, has been missing ever since the flare up happened. I opened the door to find several policemen,” said Geeta Chaudhary.

The 33-year-old woman sustained injuries on her ankle and arm that she claims were caused after policemen struck her with wooden sticks. “They interrogated me about my husband’s whereabouts, when I told them I didn’t know they hit me and left,” said Geeta. Her son has been scared ever since seeing the chaos around.

Every house that News18 visited said that there were no female constables during the exercise. None of the senior police officials News18 reached out to commented on the late-night raids.

The situation was the worst at the house of Bajrang Dal leader Yogesh Raj’s house.

Four women with bruises on their arms, necks and legs sat outside the house fearing police would arrive again and cause further damage, both physically and in terms of property.

Raj’s grandmother, 86, claimed she was kicked out of the way by policemen when they entered the house at midnight. His mother, aunt and sister sustained bruises as well.

Along with Raj, the police were also on the lookout for Devendra and Chaman in the same house. While Raj was missing, the police found the remaining two sleeping inside.

“I was sleeping with my cousin when suddenly I heard loud noises. I woke up in a hurry to find that almost a couple of dozen police officials with thick wooden sticks in their hands were shouting my brother’s name,” said Raj’s sister.

“One man caught me by the collar and pushed me away,” she added.

The Uttar Pradesh police has so far arrested four accused in the case from among 27 named and 60 unidentified people in the FIR.