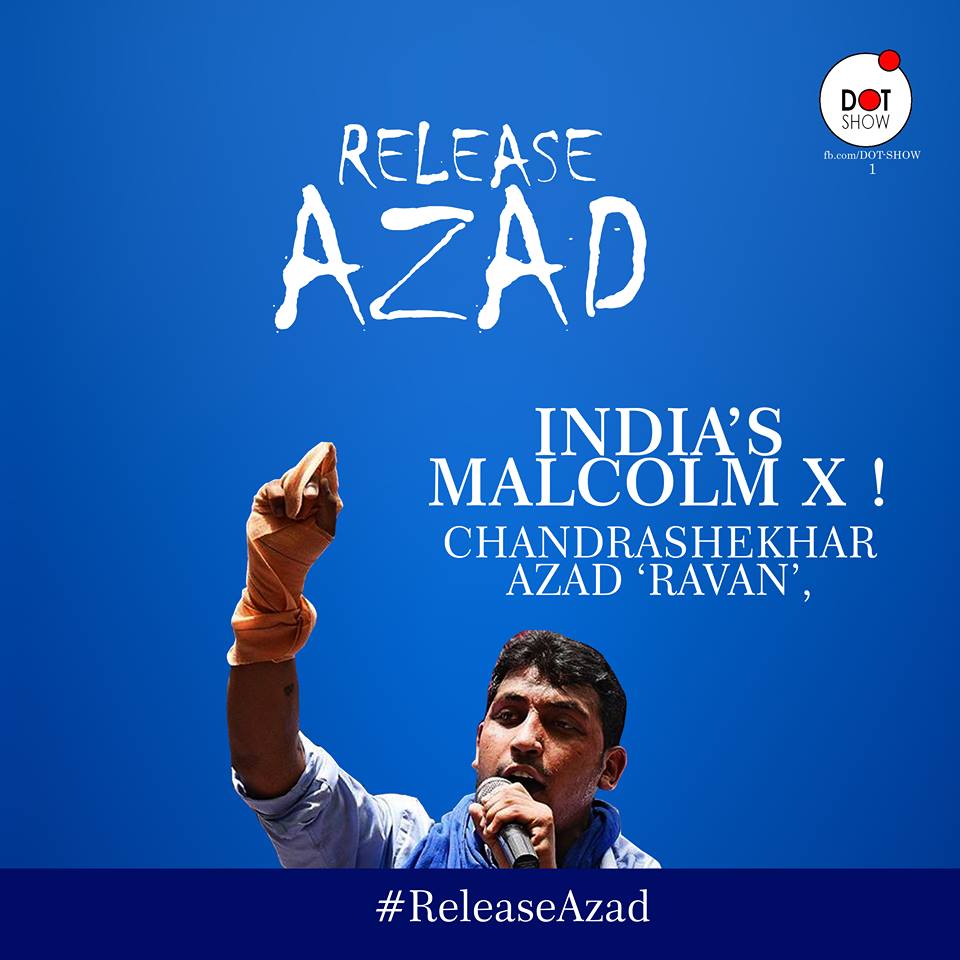 Azad is in prison since June 2017, put away as a threat to ‘national security’ for championing the cause of India’s Dalits – a community repeatedly subjected to racist violence, rape, inhumane untouchability practices, social, cultural and political discrimination. Due to the high level of impunity in cases involving Dalit victims, they have no way of asserting their rights through the judicial system.

We believe the only reason why Azad and his associates have been targeted for imprisonment is the fact they refuse to be intimidated by the threats of both private armies of the upper-caste as also strong-arm methods of the state machinery. Like Malcolm X, the visionary leader of the black community in the United States, Azad is searching for ways to protect Dalit rights fearlessly in a way that is not only constructive but also effective.

Going beyond mere rhetoric Azad organised Dalits into the ‘Bhim Army’– named after Dr Bhimrao Ambedkar, one of India’s greatest intellectuals, who drafted the Indian Constitution. The Bhim Army’s main work has been to form over 300 study circles among Dalit students in western Uttar Pradesh to spread education and organise self-defence against violent attacks by high caste groups.

Azad was initially arrested on charges of ‘inciting violence’, following clashes between upper caste Rajputs and Dalits in Saharanpur district of Uttar Pradesh. In November 2017 the Allahabad High Court granted bail in all four cases against him and his associate Kamal Walia, observing the charges were false and politically motivated. The police could not provide evidence of Azad’s specific role in the incidents of violence or of possessing weapons of any kind.

The regime however promptly re-arrested Azad under the draconian National Security Act (NSA), that allows the state to put away anyone without bail for a year. The NSA is in a long line of Indian laws like the Armed Forces Special Powers Act (AFSPA) and Unlawful Activities Prevention Act (UAPA), that violate all known norms of civil rights and are used by the Indianauthorities to suppress democratic dissent.

Worryingly there are reports of attempts to break him both mentally and bodily while in prison, including through instigated attacks against him by other prisoners. Azad has also had to be hospitalized once due to ill-health and has expressed fears state authorities may try to physically eliminate him, under some pretext or the other.

We feel Azad and the Bhim Army’s fight is not just about India’s Dalit community but for preserving Indian democracy and Constitution itself, under severe attack from extremist political groups seeking unchallenged dictatorial power. The serious threat posed to the life of Azad is similar to that faced by countless other human rights defenders throughout India, in places like Kashmir, Chhattisgarh and the North-East.

It is in this context that we, the undersigned, call for Chandrashekhar Azad’s immediate and unconditional release from prison and the dropping of all false charges against him. We also call upon all those concerned about the state of human rights in the country and the fate of India’s democracy to join the campaign for Azad’s release.