Campa Cola grabs the headlines, but a demolished slum in Mumbai has left hundreds homeless

Mulund’s Ambedkar Nagar slum was demolished less than 24 hours before residents were given a notice, in a complex case that involves a former joint municipal commissioner.
Aarefa Johari ·

At 4 pm on May 19, the residents of Ambedkar Nagar slum in Mulund, a suburb in north Mumbai, were served a demolition notice by the collector’s office, asserting that they had occupied the land illegally.

The notice gave them a mere 24 hours to pack up their belongings and leave, yet even that was too much. The bulldozers arrived the next morning, more than five hours before the deadline, and razed 130 pukka homes to the ground, leaving more than 600 people homeless.

“Many of our slum members had been on this plot for at least 30 years, yet no one protected these homes when the bulldozers came all of a sudden,” said Poonam Kannojiya, 36, an anganwadi teacher from the slum and a member of the Ghar Bachao Ghar Banao Andolan, a non-profit that has been organising slum dwellers to fight for their rights. 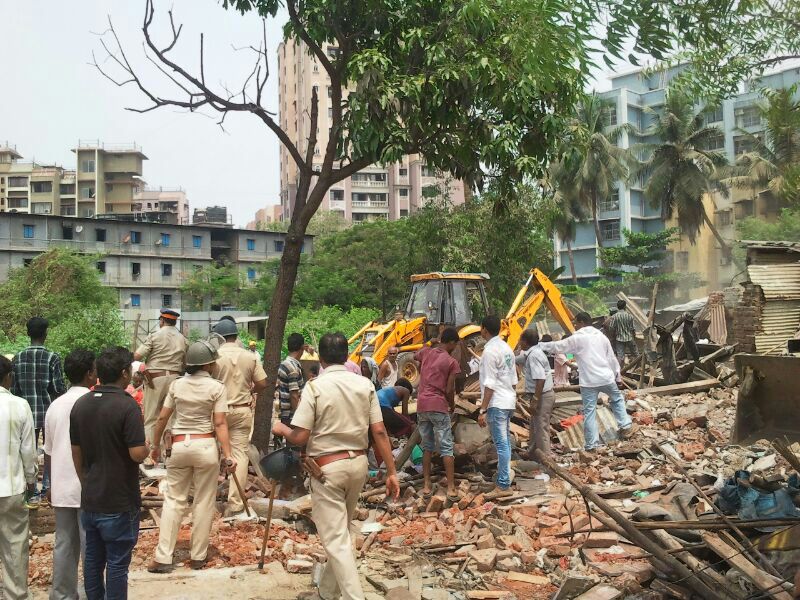 The Supreme Court’s May 31 deadline came and went without any bulldozers entering the compound. The residents have now been granted an extension of their deadline, to June 20.

The low-income families of Ambedkar Nagar have had no such luck. Since their homes were razed a month ago, 60 of the families have been living on the footpath outside their old slum plot. Their tarpaulin tents are barely able to keep out the rain and their children are constantly ill.

Like the Campa Cola flat owners, the Ambedkar Nagar slum dwellers are feeling cheated of their homes. The latter group, however, has a particular right to feel aggrieved: the Maharashtra Slum Areas Act promised regularisation of slums established before 1995, and was amended in March to raise the limit to the year 2000. The Ambedkar Nagar slum rose in the mid-1980s, though not all the residents have been living there that long.

From May 20 to June 13, slum residents went on a rotating hunger strike at Azad Maidan, demanding their right to rehabilitation. They ended their fast only after chief minister Prithviraj Chavan held a meeting with social activist Medha Patkar. “The CM and his team of secretaries agreed that families living in the slum since before 2000 should now get protection in the light of the new law,” said Patkar. “The CM also said he would take care of the matter in a couple of days.”

However, five days down the line, no action has been taken to address the slum dwellers’ dilemma yet.

The saga of the Ambedkar Nagar slum in Mulund goes back to the mid-1990s and involves allegations of forced signatures, a former joint municipal commissioner-turned-builder, and a company run by his son.

According to older residents, the slum was built on marshy mangrove land by a mix of blue-collar migrants and Dalits from states like Andhra Pradesh, Uttar Pradesh and Rajasthan. Until 2011 there were more than 550 homes in the slum. However, the land belonged to the Mumbai Suburban Collectorate. In 1996, unknown to the residents, the plot was allotted to Ashtabhuja Society, a cooperative society largely comprising government servants. One of the key figures associated with Ashtabhuja Society is a former BMC joint commissioner, Dattaji Desai.

The Mumbai Suburban Collectorate allocated the land to the Ashtabhuja Society when Dattaji Desai was the joint municipal commissioner of Mumbai. He retired two years later, in 1998.

“At that time, they held one quick meeting with the slum residents and assured us that every single family would be rehabilitated,” said Kannojiya of the Ghar Bachaco Ghar Banao Andolan. That is also what the developers assured former chief minister Ashok Chavan in a private meeting. Kannojiya’s team has acquired the minutes through the Right to Information Act. Yet in reality, residents say, this did not happen.

“The two societies prepared an agreement that most residents were forced to sign under the threat of violence,” said Ali Shaikh, a member of the Ghar Bachao Ghar Banao Andolan. Later, when they got hold of a copy of the agreement, the slum-dwellers discovered that the builders intended to rehabilitate only those with proof of residence dating back to before 1995, not all the residents.

While the former municipal official Dattaji Desai heads Ashtabhuja Society, the developers for Ambedkar Nagar society are Rajendra Salvi and Ajay Desai. Ajay is Dattaji Desai’s son. They have been appointed by the SRA.

In 2011, amid protests and attempts to demolish parts of the slum, the developers paid some residents to leave and offered transit accommodation to 307 families who had the required documents. A number of families chose to stay back in protest, and in 2013, with the help of Medha Patkar, they were able to get an enquiry commission to study this and five other SRA cases that were suspected of illegal practices. The enquiry was conducted by principal secretary for housing in Maharashtra, IAS officer Debashish Chakrabarty, and made its report only recently.

Chakrabarty was the chief executive of the SRA in 2006 when Maharashtra’s Anti-Corruption Bureau investigated members of the organisation about a Rs 6 crore slum redevelopment scheme in Jogeshwari.

The demolition of the slum in Mulund came via a clever bit of manipulation of official channels. On May 17, slum residents finally got hold of Chakrabarty’s report, which stated that the slum dwellers should have 30 days to file formal complaints about the forced signatures and other incidents of corruption in the case. Yet, in the meantime, Dattaji Desai’s Ashtabhuja Society had sued the principal secretary of the SRA for hindering development work on the plot. The respondent claimed the plot was illegally occupied by slum dwellers, so the Bombay High Court gave the order to demolish the slums. It was on this order that the remaining homes were destroyed on May 20.

The developers have not begun constructing either of the two slum rehabilitation buildings that were planned, even though the land for them had been clear since 2011. 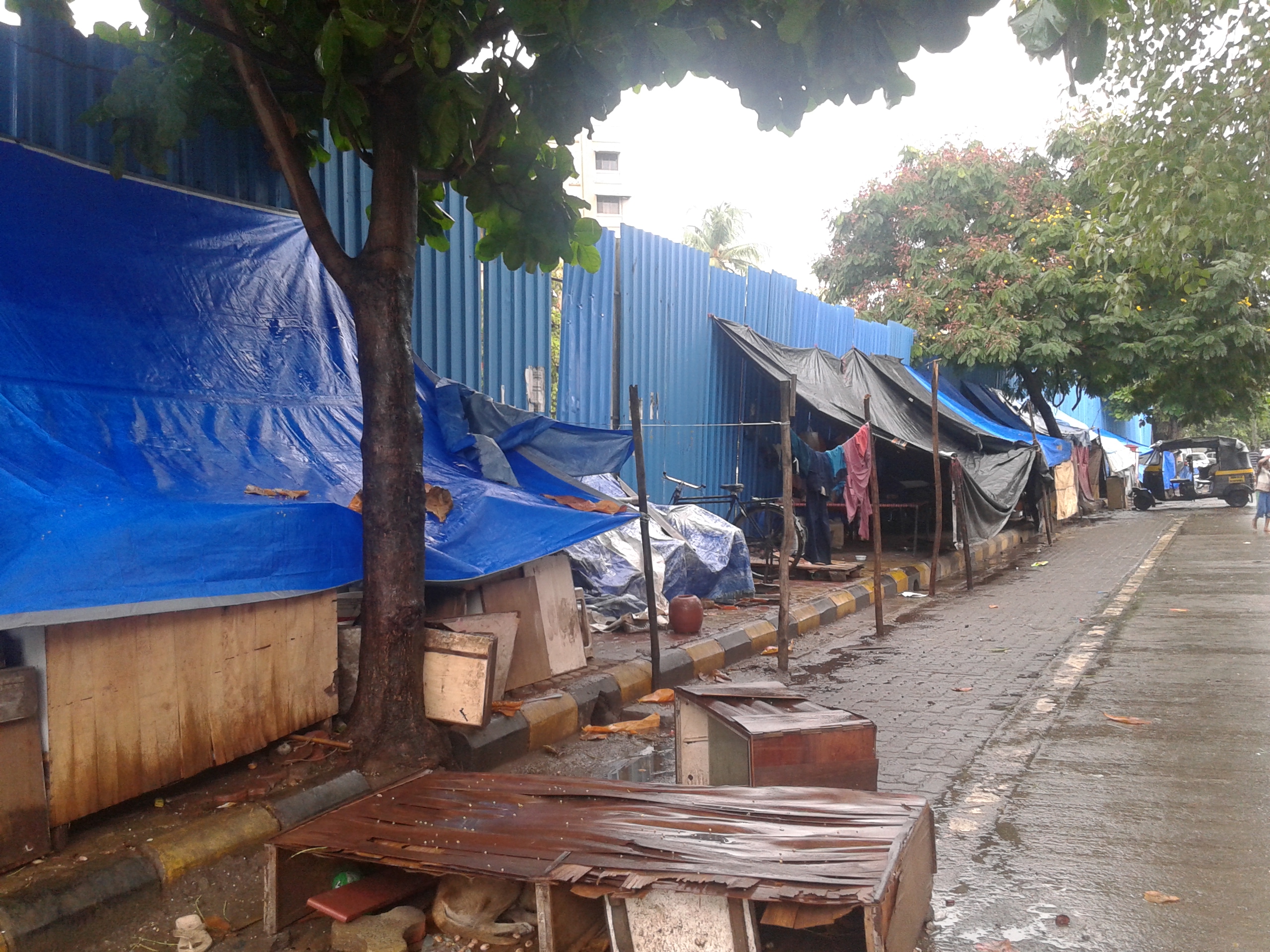 No country for the poor

Unlike the Campa Cola-protests, which have attracted the attention of the national media, the Ambedkar Nagar resistance has taken place unnoticed. The Campa Cola residents were given support by rival political parties, the Mayor of Mumbai as well as celebrities like Lata Mangeshkar. When senior citizens in some of the illegal flats died – allegedly due to the stress of their ordeal – their eviction was postponed on humanitarian grounds.

In Ambedkar Nagar, on the other hand, 50-year-old Majhiyain Varma had to cope with her husband’s death amidst testing circumstances. “Ten days after our home was demolished in 2011, he died because of the stress,” said Varma, who was left to rebuild their house alone, with her married daughter. Since then, Varma has been feeding herself by selling cotton wicks she rolls herself – Rs 30 per kilo, one kilo in four days. “Now that my house is completely razed and I am on the footpath in the rains, my work has come to a standstill,” she said.