Can a Bombay Strongman Explain Trump?

As I watched Donald J. Trump campaigning, I thought, I’ve seen this show before. It was in the 1990s in Bombay (now called Mumbai). And the man playing the Trump part was Bal Keshav Thackeray, the leader of the Hindu nationalist Shiv Sena party, who rode to power on a wave of outrageous stories, bluster, lies, bigotry and showmanship. He died in 2012 after ruling — and ruining — the city I grew up in. The road to understanding Mr. Trump might just lie through understanding Mr. Thackeray, and what became of Bombay.

Mr. Thackeray, who founded his Shiv Sena party in 1966, began his career as a political cartoonist. He had a gift for outrageous parody. His own appearance was a caricature of a Bollywood guru: In his later years, he took to wearing dark shades, an orange robe and a necklace of holy beads, holding a Cohiba in one hand and a glass of warm beer in the other. His party workers, his ministers and the press referred to Mr. Thackeray as “The Supremo.”

He was a master of the art of the outrage, of politics as performance. He would castigate his opponents as “vampires,” “a sack of flour” and various untranslatable epithets like calling South Indians “yandu-gundus.” Periodically, he would express admiration for Hitler, immediately attracting thousands of news pages of free publicity. He regularly called for books and films that he felt were antithetical to Hindu values to be banned. Egged on by his invective, his legions would go out and beat up artists and journalists.

Though Mr. Thackeray neither inherited nor ran businesses as Mr. Trump did, the two men’s support base was remarkably similar in its political contours. The people Mr. Thackeray represented were the native Maharashtrians, the “sons of the soil.” The list of his enemies varied with the seasons, from Communists to South Indian migrants to Gujaratis to Muslims and, eventually, North Indians.

Working-class Maharashtrians felt excluded from booming Bombay, capital of Maharashtra State, as it made the transition from manufacturing to a postindustrial financial and services economy. They resented both the moneyed cosmopolitan elites as well as the North Indian migrants who competed with them for low-skill jobs.

Mr. Thackeray promised to restore their jobs, by threatening mob violence against industrialists who hired non-natives. He promised to make Maharashtra great again by reversing the clock: His idol was the 17th-century warrior-king Shivaji, who held the Mughal emperors at bay. He demanded the requirement of a visa to enter Bombay. 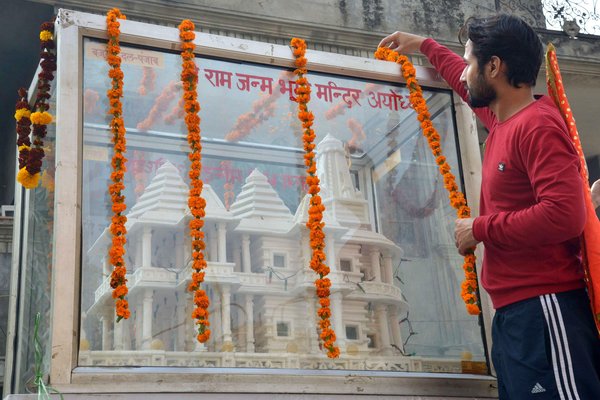 Mr. Thackeray played fast and loose with the facts, claiming that the Indian Constitution allowed the imposition of a ban on non-natives in Bombay. His party newspaper, Saamna, was the Breitbart News of its time, chock-full of fake news about Muslims, outsiders, celebrities.

Bombay accommodated every faith and was relatively untouched by the mass violence that accompanied the Partition of India in 1947. But after a Hindu nationalist mob destroyed a medieval mosque in the North Indian town Ayodhya in December 1992, Bombay erupted in sectarian riots, which continued through January 1993. More than 1,100 people, most of them Muslims, were killed. Mr. Thackeray organized the violence, leading his troops “like a veteran general,” according to a judicial inquiry.

In June 1993, when a court was about to admit a case against him for his writings in Saamna, Mr. Thackeray responded, “I piss on the court’s judgments. Most judges are like plague-ridden rats against whom direct action must be taken.”

After the riots, Muslims were pushed to or sought out their own ghettos. Muslim dons of the Bombay underworld retaliated by exploding 13 bombs across the city, which killed 257 people, Hindu and Muslim alike. Mr. Thackeray had destroyed the cosmopolitan, secular Bombay of my adolescence. The violence consolidated the Hindu vote behind Mr. Thackeray and propelled his party into power, in Bombay and in Maharashtra.

On assuming office, Mr. Thackeray’s party got into bed with the very elites it had scorned. Mr. Thackeray and big business loved each other. Trade unions controlled by his men were much more malleable than the left-controlled ones. On a return to Bombay in 2008, I met the Shiv Sena street fighters I had known in the 1990s, and the Muslims gangsters they had battled. They were all in real estate now. They had been hired by developers to extort slum dwellers into consenting to their houses being razed, in exchange for shabby tower blocks under a government program. The alligators in the Bombay swamp had never feasted better.

Mr. Thackeray never held a political office. He had to appear bigger than politics. “I hate politics,” he said, and bragged that he ran the state by “remote control.” I went to interview him in his bungalow, which had a perennial line of favor seekers waiting in the antechamber. They could be Bollywood stars, the chairman of Enron, gangsters or clerks. At one point during the interview, he burst into an unprompted, extended soliloquy about rats in Bombay. His answers had no relationship to my questions; they were simply stray thoughts that seemed to occur at that particular moment. It was a mismatch of scale: this small-minded man controlling this enormous city.

Mr. Thackeray had no use for theories or data; he was all about action, or the illusion of action. “I like people who can get the things done!” a sign in his office proclaimed. His solutions to the city’s vast problems were precise and petty: rename Bombay as Mumbai; increase water flow in the city’s hydrants to enable the flushing out of rats.

Mr. Thackeray was the most powerful man in the city because, like Mr. Trump, he knew how to tell a good story. Mr. Trump’s victory was the triumph of stories over numbers. Hillary Clinton had the research, the voter data. Mr. Trump went with his gut, told stories, ripping yarns. The audience laughed, cried — and voted.

I teach journalism at New York University, and none of the esteemed journalists I know predicted a Trump victory. In the 1980s, nobody in the Bombay elite could predict Mr. Thackeray’s electoral victories. Mr. Trump entertained and outraged. We sought comfort in data. FiveThirtyEight and The Upshot reassured us hourly with numbers predicting a Clinton victory. But people are too sophisticated, too nuanced, too complex, to be captured in numbers. We respond with our head to numbers; we respond with our heart to stories. God speaks to us in stories. The scriptures of every faith are collections of stories, not assemblages of data.

Mr. Trump and Mr. Thackeray understood the power of stories and spoke not in policy, but in parables. A populist is, above all, a gifted storyteller. At this point in our great democracy, most voters are … bored, and they don’t respond well to policy statements. Mrs. Clinton’s address to a Bollywood show in New Jersey read like an academic paper on multiculturalism. Mr. Trump, on the other hand, was succinct: “It’s a weakness. I love the beautiful Indian actresses. There’s nothing like them.”

Every fall during the Hindu festival of Dussehra, Mr. Thackeray would get on the stage at Shivaji Park in Bombay and deliver a performance lasting several hours, part stand-up comedy, part paranoid conspiracy theory, part scurrilous mockery of his political opponents. Hundreds of thousands of his followers cheered, laughed, engaged in frenzied call-and-response. He never used a written text. A high, or low, point was his mockery of Sonia Gandhi, the Congress Party leader. Mr. Thackeray would pull a sari over his head and mimic the Italian-born daughter-in-law of the Nehru-Gandhi family in a high falsetto, mocking her fumbling Hindi.

After the Bombay riots, one of his followers told me that Mr. Thackeray had powertoni, their contraction of “power of attorney”: the awesome ability to act on someone else’s behalf, to sign documents, to have people killed. Powerless factory workers in Ohio and coal miners in Kentucky see Mr. Trump as the man with powertoni. Every time your hero, your attorney, humiliates the good and the great, you feel a swell of pride; you feel, in your shabby house with the leaky roof, that you have obtained a measure of power, in Manhattan, in Washington.

Mr. Thackeray’s men took pride in watching industrialists, bureaucrats and politicians bow before him, touch his feet. They spoke in awe about Michael Jackson’s calling on Mr. Thackeray on his only visit to Bombay, in 1996. Jackson used his toilet; Mr. Thackeray later led reporters to the sanctified bowl.

He used mob violence to rule Bombay. The Muslims who were attacked in the riots were from all social classes. Their killers walked free; they had powertoni.

I don’t know if Mr. Trump’s America will bring rioting and mass violence. But his ability to sell a false story well, and our voracious need to be entertained, means that the walls are already coming up — not on the border, but between city and village, red and blue state, white and nonwhite, man and woman, native and immigrant. Bombayites never imagined that Mr. Thackeray’s riveting speeches could lead to dead bodies on the streets. Since the election, hate crimes have risen by 115 percent in New York, Mr. Trump’s birthplace and my home since I was fourteen. What happens if the violent incitement of Mr. Trump’s campaign continues into his presidency?

Suketu Mehta’s “Maximum City: Bombay Lost and Found” was a finalist for the Pulitzer Prize. He teaches journalism at New York University and is working on a book about contemporary New York.