Canada sued over years of alleged experimentation on indigenous people

A class action lawsuit has been filed in a Canadian court on behalf of the thousands of indigenous people alleged to have been unwittingly subjected to medical experiments without their consent.

Filed this month in a courtroom in the province of Saskatchewan, the lawsuit holds the federal government responsible for experiments allegedly carried out on reserves and in residential schools between the 1930s and 1950s.

The suit also accuses the Canadian government of a long history of “discriminatory and inadequate medical care” at Indian hospitals and sanatoriums – key components of a segregated healthcare system that operated across the country from 1945 into the early 1980s.

“This strikes me as so atrocious that there ought to be punitive and exemplary damages awarded, in addition to compensation,” said Tony Merchant, whose Merchant Law Group filed the class action.

The lawsuit, which has not yet been tested in court, alleges that residential schools – where more than 150,000 aboriginal children were carted off in an attempt to forcibly assimilate them into Canadian society – were used as sites for nutritional experiments, where researchers tested out their theories about vitamins and certain foods. 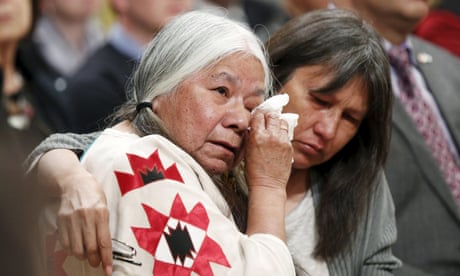 Canada confronts its dark history of abuse in residential schools

As the diet at the schools was known to be nutritionally deficient, the children were considered “ideal experimental subjects”, according to court documents. It cites six schools, stretching from Nova Scotia to British Columbia, and links them to experiments carried out from 1948 to 1953.

At times, researchers would carry out what Merchant described as trials aimed at depriving the children of nutrients that researchers suspected were beneficial.

“So what they did on a systemic basis … they would identify a group of indigenous children in schools where they were being compulsorily held and they would not give them the same treatment,” said Merchant. “They used them as a control against experiments that they were doing in other places and they also used them to test certain kinds of foods and drugs.”

Court documents describe the lengths researchers at times went to protect their results: after a principal in Kenora, Ontario, asked that all the residential school’s children be given iron and vitamin tablets, the researcher asked him to refrain from doing so, as it would interfere with the experiment.

In other instances, researchers withheld dental treatment from children, worried that healthier teeth and gums would skew their results.

The school in Kenora was also used to test an experimental drug on children with ear problems, leaving nine children with significant hearing loss, according to court documents.

The lawsuit notes that those who did not cooperate were subject to physical abuse.

At a reserve in northern Manitoba, researchers visiting in the 1940s suspected malnutrition was behind several cases of blindness as well as an outbreak of tuberculosis. In order to test their theory, they gave nutritional supplements to 125 people. The others on the 300-person reserve were used as a control group, left to fend off malnutrition amid a collapsing fur trade and sharp limits on government aid.

Years later, researchers noted they had seen an improvement in health among those given the supplements.

Merchant believed that the number of those affected by the experiments could run into the thousands. “Some people don’t even know that they were the subject of experiments,” he said. “In some instances we can prove that principals of the schools said, ‘Well, we need consent,’ and they said, ‘We’re not going to ask for consent.’”

The lawsuit is directed at the federal government, as it was Canada that established, funded and oversaw residential schools, Indian hospitals and sanatoriums.

The plaintiff in the case is John Pambrun, 77, a First Nations man who spent nearly six years of his childhood in Indian hospitals and sanatoriums. In 1955 – long after antibiotics had become the standard treatment for tuberculosis – doctors removed part of his right lung, according to court documents.

“We can’t find anything in the medical records that indicates that he even had tuberculosis,” said Merchant. “We’re just mystified.”

The years of treatment took him away from his family and his education, while the partial loss of a lung left him suffering shortness of breath and limited his employment options. “It has just been gnawing him all these years that he was mistreated by a nation that took him into their care and had a special responsibility for his care,” said Merchant.

Many of the allegations contained in the lawsuit stem from investigations done by Ian Mosby at the University of Guelph.In research published in 2013, he documented more than a decade of nutritional experiments on indigenous peoples.

In a statement to the Guardian, a spokesperson for Canada’s indigenous and northern affairs department described news of the allegations as “very troubling”. Noting that the federal government had yet to review the statement of claim, the ministry declined to comment further.

While Merchant acknowledged that the lawsuit was aimed at the government of the day, rather than the many governments who allegedly allowed these experiments to happen under their watch, he described it as part of Canada’s fledgling efforts to confront its historical mistreatment of the country’s indigenous population.

“We’re in a time of patching our relationship with indigenous people,” he said. “So to go back and recognise that there was wrong and pay compensation, I think, is important.”