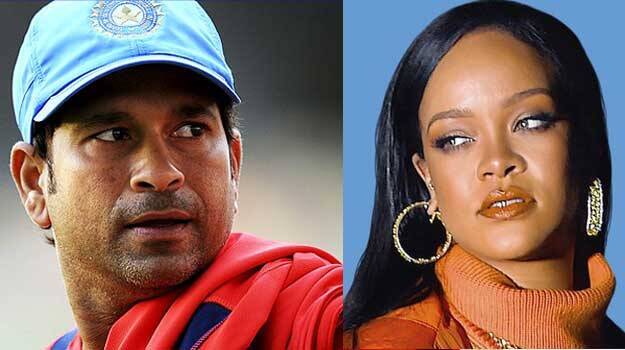 Since Rihanna and Greta Thunberg and other foreign public figures drew attention to the farmers’ agitation on the borders of Delhi, the government of India has organized a social media counterblast. India’s External Affairs Minister led the charge, tweeting “Motivated campaigns targeting India will never succeed. We have the self-confidence today to hold our own. This India will push back.” The image conjured up by this muscular tweet, of India’s 1.3 billion citizens holding their own against Rihanna’s 101.2 million twitter followers, was galvanizing

It galvanized Indian cricket’s most distinguished players, past and present, into a dignified defence of the realm. Sachin Tendulkar tweeted: “India’s sovereignty cannot be compromised. External forces can be spectators but not participants. Indians know India and should decide for India. Let’s remain united as a nation.” Like Tendulkar, Virat Kohli was concerned about unity: “Let us all stay united in this hour of disagreements. Farmers are an integral part of our country and I’m sure an amicable solution will be found between all parties to bring about peace and move forward together.”

United against what? To quote Jaishankar and Tendulkar, united against motivated campaigns and external forces. The scope of these campaigns and the threat of these forces can be gauged by the willingness of Kohli, Ajinkya Rahane, Rohit Sharma and Ravi Shastri to abandon their usual reticence about public affairs and speak out against this clear and present danger to India’s unity.

Their customary distance from the hurly-burly of public controversy gives their present call for unity a special resonance. Conscious of their iconic status, they have consistently stayed above the fray. They stayed out of the controversies about the Citizenship Amendment Act, the National Register of Citizens, the Love Jihad laws, the cattle-trade lynchings, the communal riots in Delhi, the experiment with demonetisation, even China’s violation of India’s borders.

Tendulkar could have tweeted the same words against China’s brazen encroachment: “India’s sovereignty cannot be compromised. External forces can be spectators but not participants.” But he didn’t, perhaps because this was a matter of state, best left to the government of India. No matter how inconvenienced Ravi Shastri was by demonetisation, there is no record of him commenting on this signature policy.

No cricketer was presumptuous enough to tweet during the Shaheen Bagh sit-in that ‘Muslims are an integral part of our country and I’m sure an amicable solution will be found between all parties to bring about peace and move forward together.” Despite the grave provocation by way of tweets and comments from abroad during the campaign against the CAA, India’s cricketers were properly indifferent to this trolling.

That India’s cricketers chose to depart from this tradition of Olympian, tight-lipped discretion is a measure of the clear and present danger posed by Rihanna and Greta, Dr. Zeus and Mia Khalifa. The Ministry of External Affairs or MEA had, in a statement, written not just of individuals but “vested interests” and “entities”. The implausibility of names like ‘Dr. Zeus’ and ‘Mia Khalifa’ must have led the MEA to the conclusion that this encroachment on India’s unity, integrity and sovereignty was being orchestrated by shadowy entities akin to SMERSH and Karla, not mere individuals.

This must account for the alacrity with which a titan like Anil Kumble stepped up to declare his solidarity with that heroic hashtag, #IndiaAgainstPropaganda. And no wonder that Kohli and Rahane, Captain and Vice-Captain of India’s Test side, and Rohit Sharma, Vice-Captain of the ODI team, chose to give their all in the cause of India at this uncertain hour. This is true leadership: cometh the hour, cometh the man. (Hardik Pandya’s unblinking patriotism is, if anything, even more admirable, given that he has just returned to the squad from injury and doesn’t have a leadership role.)

Indian cricket is blessed. So many captains, former and current, stepped up to man the breach in India’s unity opened up by predatory anarchists like Rihanna and Greta Thunberg. When India’s ship of state leaves this perilous passage behind and finds safe harbour, only Walt Whitman’s immortal lines will serve to commemorate their Lincoln-esque courage:

‘O Captain! my Captain! our fearful trip is done,
The ship has weather’d every rack, the prize we sought is won…’

The one downside to all this heroism is that the Test series starting tomorrow will be an anti-climax. After routing Rihanna in single combat, what price Joe Root?

Does Kerala need a share of the Rs 200 crore Naxal pie?
Bhopal survivors: on 31st year anniversary of the world’s worst industrial disaster
Mining - Old problems mar a new solution
After Reporting Sexual Harassment, One Professor Found Herself Under Investigation