Caste and Aadhaar: “How Will a Manual Scavenger Leave His Past Behind?” 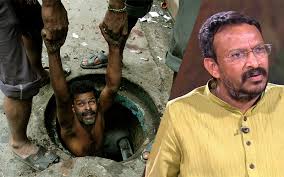 NEW DELHI: “How can we accept a system that does not allow us to shed that identity and move on? How can a number that links up databases be good for us,” is the pertinent question raised by Safai Karamchari Andolan leader, Bezwada Wilson who has been working tirelessly against manual scavenging for details. A question that the government of India has shied away from answering, even as it moves ruthlessly to implement the UID/Aadhar project despite the Supreme Court rulings, and the stiff opposition to this ‘invasion of privacy’ by large sections of the populace.

Wilson said, and has just been confirmed by the government that the UID number will haunt even thedead. And the information about the inividual will be held to that number. And as he pointed out, “changing an identity will become impossible. We are working for an eradication of the practice of manual scavening, for rehabilitation of those who have been engaged in this, and then leaing behind that tag of the manual scavenger. How can we accept a system that does not allow us to shed that identity and move on?” How indeed?

The UID Number will keep an Indian permanently enclosed in his/her caste identity, is a fear being voiced by many and as Wilson said make it impossible for the individual kept at the bottom rung of the ladder will find it even more difficult to transgress the ID trapped in his ‘number’.

A reputed anti-Aadhaar activist and member of the Citizens Forum for Civil Liberties Dr Gopal Krishna has taken the issue to the President of India through a letter where he has reminded at some length of the dual position taken by BJP FInance Minister Arun Jaitley. As Leader of the Opposition in the Rajya Sabha not so long ago Jaitley wrote,, “Firstly, every citizen in India has a right to privacy. His right to pirivacy is an inherent aspect of his personal liberty. Interference in the right to privacy is an interference in his personal liberty by a process which is not fair, just or reasonable. A person’s Call Detail Records can throw up details of several transactions. In the case of an average citizen it can reflect on his relationships. In the case of a professional or a business person it can reflect on his financial transactions. In the case of a journalist it can reveal the identity of his sources. In the case of a politician it can reveal the identity of the person with whom he has regular access. Every person has ‘a right to be left alone’.”

Jaitley who has now ensured the passage of this controversial legislation as a Money Bill, trying to push past the petitions being heard in the Supreme Court had also said as Opposition leader, “We are now entering the era of the Adhaar number. The Government (Manmohan Singh) has recently made the existence of the Adhaar number as a condition precedent for undertaking several activities; from registering marriages to execution of property documents. Will those who encroach upon the affairs of others be able to get access to bank accounts and other important details by breaking into the system? If this ever becomes possible the consequences would be far messier.”

On 8th April, 2014, Prime Minister Narendra Modi had tweeted before the elections , “On Aadhaar, neither the Team that I met nor PM could answer my Qs (questions) on security threat it can pose. There is no vision, only political gimmick.”

Interestingly, as the letter to the President points out, even a colonial law Identification of Prisoners Act, 1920, ordered that measurements, finger impressions, footprints and photographs of persons conviced, or arrested should all be destroyed at the time of his/her acquittal. This was to ensure the acquitted prisoner a clean start in life, quite against the UID/Aadhar project that stores the biometric data forever. “This makes present and future citizens worse than prisoners” Dr Gopal Krishna contends in the letter to the President.

None of the issues being raised have been answered by the government that is far more aggressive in pushing the scheme forward, than the Congress government that had introduced the proposal as a key initiative.