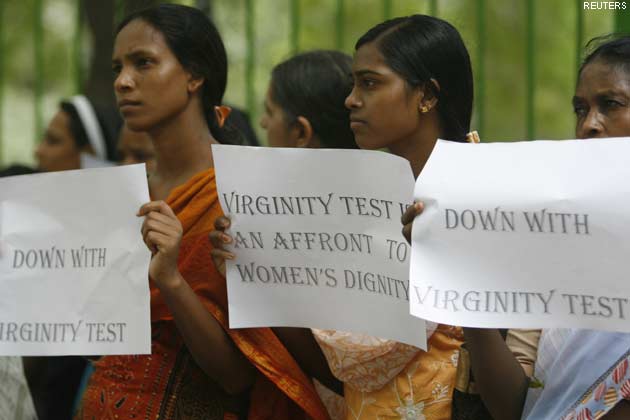 By Alka Dhupkar,
The girl and her mother were prevented from filing a police complaint and have been locked in their house since May 23. Activists are now trying to intervene in the case

A 20-year-old girl from Ahmednagar district has been placed on unofficial house arrest by her own father, along with her mother. The girl’s father saw this as a fitting punishment after the duo attempted to file a police complaint against the girl’s husband and the caste panchayat. Their mobile phones have been taken away and they have been confined to the house for the past week. All this, because the girl’s husband abandoned her for failing a virginity test.

On May 22, the girl, who is preparing to get into the police force, married a 25-year-old man from Nashik. This is his second marriage and both belong to the Kanajarbhat community which has two sects — Dera Sachha and Khandpith. This community has their own constitution which they follow religiously. All manners of crime and punishment is decided by this panchayat.

Placing a high value on virginity in women, members of the caste panchayat wait outside a room after the wedding, while the couple has sex on a plain white cloth. This is a routine test to prove that the woman is a virgin.

In the girl’s case, her husband said that she had not bled after sex and rejected her as his wife. The marriage was summarily invalidated, despite the girl’s pleas that she was, in fact, a virgin and that her lack of bleeding could be due to the vigorous exercise she went through in preparation for the police force. Her husband and in-laws also took away all her jewellery. The next day, she and her mother tried to lodge a police complaint. But, her father immediately intervened, locked them in the house and took away the girl’s mobile phone.

Even more alarmingly, when Mirror tried to talk to the girl through some activists who are working to help her, she not only refused out of fear of the caste panchayat, but, according to her, they have proposed a second test on which her marriage depends.

She will be given a metre of cloth, to be tied either to the upper or lower portion of her body. She must then run naked with this cloth and caste panchayat male representatives will chase her, throwing balls of hot flour on her body. She has rejected the proposal.

Said Krishna Chandgude, who works with with the Maharashtra Andhashraddha Nirmoolan Samiti (MANS) as an anti-caste panchayat crusader, “Advocate Ranjana Gavande and I went to the house and spoke to the girl and her parents. I tried to convince her father to file a police complaint, but he is afraid of the caste panchayat. Now, we are trying to meet the caste panchayat members and convince them to stop this feudal, anti-constitutional practice.”

Chandgude added, “Earlier, we had successfully stopped the virginity tests conducted by the Vaidu caste panchayat. We have been in constant dialogue with the Kanjarabhat caste panchayat, too, but in vain. Police are afraid to take suo motu action against them because there are no official complaints. We hope this case will prove to be the ice-breaker.”

Gavande said, “Conducting any kind of virginity test post or pre-marriage is insulting to the concerned woman. The caste panchyat agreed to the man being married twice, which is a welcome move. Why, then, are they making a fuss over a non-issue like virginity?”

Avinash Patil, working president of MANS, told Mirror, “Maharashtra is the first state to pass a law against social boycott and illogical justice meted out by such panchayats – the Maharashtra Protection of People from Social Boycott (Prevention, Prohibition and Redressal) Act, 2016. The law is awaiting the president’s signature. If it is implemented on time, such rituals will be prohibited.”

Shiv Sena leader, Neelam Gorhe, told Mirror, “This is mental and physical cruelty against the woman. Action can be taken against this even under current laws. We need more awareness to ensure that such cases do not occur.”

█ Panchayat members have said that they may give permission for the marriage if the girl runs semi-naked while wearing a metre of cloth, while balls of hot flour are lobbed at her.

Chhattisgarh - All central jails in the state overcrowded: Assembly told
Feel like shooting stone-pelters in Kashmir: Haryana minister Anil Vij #WTFnews
#AsaramRapeCase- Parents would not have believed their own daughter if they were not present #Vaw...
Kamal Haasan- If there is no secural state, I will leave the country #Vishwaroopam #FOE #Censorship