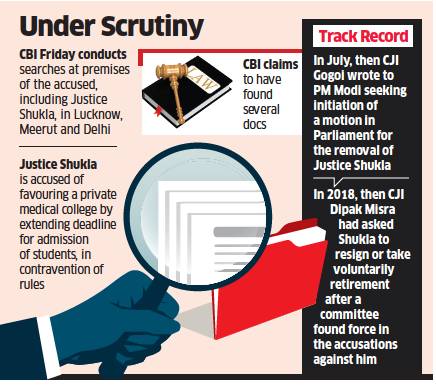 The CBI has registered a corruption case against Justice SN Shukla of the Allahabad High Court in an alleged medical college admission scandal, four months after the then Chief Justice of India Ranjan Gogoi gave the go-ahead to the agency to book the serving judge.

Besides Justice Shukla, former Odisha high court judge IM Quddusi and five others have been booked by the CBI in a fresh FIR registered on December 4. The agency had earlier filed a charge sheet against Justice Quddusi.

The CBI on Friday conducted searches at the premises of the accused, including Justice Shukla, in Lucknow, Meerut and Delhi. It claims to have found several documents.

Justice Shukla is accused of favouring a private medical college by extending the deadline for admission of students, in contravention of rules.

In 2018, Justice Gogoi’s predecessor, Dipak Misra, had asked Shukla to resign or take voluntarily retirement, after a committee comprising the then Madras High Court Chief Justice Indira Banerjee, Sikkim High Court Chief Justice SK Agnihotri and Madhya Pradesh High Court’s Justice PK Jaiswal found force in the accusations against him. The judge was then removed from all judicial and administrative work and he stands debarred from entering the high court. The latest FIR is part of the original one as under law a separate FIR cannot be registered, said advocate Vijay Aggarwal, a lawyer for former judge Quddusi.

According to the new FIR, the central government had debarred Prasad Institute of Medical Sciences, along with 46 other medical colleges, in May 2017 from admitting medical students on account of substandard facilities and non-fulfilment of the required criteria.

This decision was challenged by the Prasad Education Trust in the Supreme Court. The FIR alleges that subsequently, a conspiracy was hatched among the accused and the writ petition before the apex court was withdrawn.

A petition was then filed before the Lucknow bench of the Allahabad High Court on August 24, 2017. It was further alleged in the FIR that the petition was heard on August 25 by a division bench that included Justice SN Shukla, and a favourable order was passed the same day. The institute paid an “illegal gratification” to one of the accused, the FIR alleged.

In the original FIR, registered in September 2017, the agency had booked former judge Quddusi, a woman, public servants and private persons with corruption and criminal conspiracy charges.

As per that FIR, the Medical Council of India had debarred a college run by the Prasad Education Trust, citing substandard facilities and non-fulfilment of the requirements.BP Yadav and Palash Yadav, who were managing the affairs of the trust, challenged it in the Supreme Court and had been holding regular meetings with the alleged co-conspirators in Delhi to find a way to settle the issue, it said.