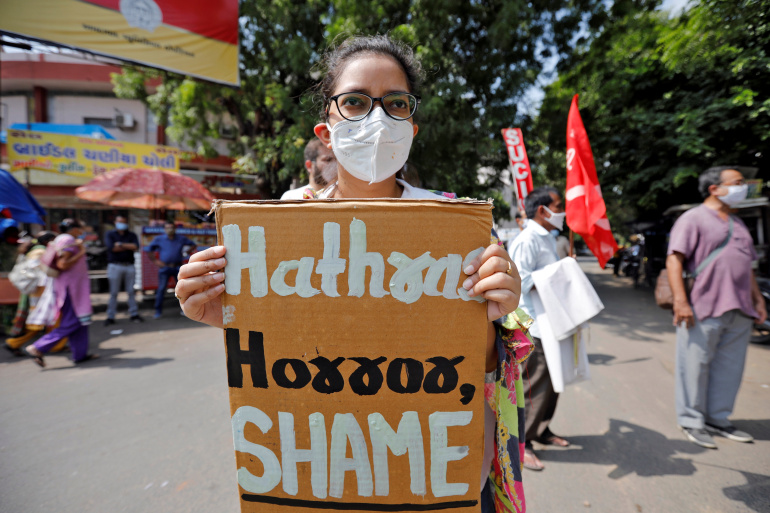 Hathras Gang-Rape and Murder Case:: The CBI has also invoked charges against the accused under the SC/ST (Prevention of Atrocities) Act.

The four accused in the alleged gang-rape and torture of a young Dalit woman in Uttar Pradesh’s Hathras in September were today charged by the CBI of gang-rape and murder, over three months after the incident that triggered outrage across across the nation.

The CBI has also invoked charges against the accused under the SC/ST (Prevention of Atrocities) Act. The probe agency filed its chargesheet before a court in Hathras, some 200 km from Delhi.

After nearly two months of probe, the agency concluded in its final report that the accused — Sandeep, Ravi, Luv Kush and Ramu — allegedly gangraped and murdered the woman when she had gone to the fields to collect fodder on September 14 in her village Bhulgarhi, they said.
In its findings submitted before the competent court in Hathras, the agency has slapped Indian Penal Code (IPC) sections pertaining to rape, murder and gangrape apart from those under the SC/ST (Prevention of Atrocities) Act against the four accused men from the village, they said.
Hathras gangrape and murder case: How the case has unfolded so far
The maximum sentence in the above charges is capital punishment.
The agency has based its findings on the dying statement of the woman in which she is understood to have named the accused, besides scientific and forensic evidence collected by the CBI and statements of witnesses and the victim’s family members recorded by it.
The findings submitted by the CBI have left red faced the top officials of Uttar Pradesh Police who had claimed that no evidence of rape was found in forensic tests.

Uttar Pradesh’s Additional Director General (Law and Order) Prashant Kumar had said, “The report of the FSL has come. It says clearly that samples did not contain semen. It makes clear that there was no rape or gangrape”.

The ADG had also claimed that the woman in her statement to police “did not mention rape but talked about “‘maar-peet’ (beating) only”.
An embarrassed Uttar Pradesh government had to hand over the case to the CBI after the incident triggered massive public outrage and a political slugfest.

Coming close on the heels of Unnao rape case in which Kuldeep Singh Sengar, a former BJP MLA, was sentenced life imprisonment for raping a minor girl in 2017, the gruesome Hathras incident snowballed into a political storm with members of the Congress, Aam Admi Party, Trinamool Congress and other opposition leaders of the state from Samajwadi Party and Rashtriya Lok Dal staging massive protests.

The Allahabad High Court took suo motu cognizance of the victim’s late night cremation by the state police and had some terse remarks for senior officials, warning them against character assassination of the victim and urging restraint by the officials, political parties and the media.
It also pulled up Additional Director General (Law and Order) Prashant Kumar and Hathras District Magistrate Praveen Kumar Laxkar for suggesting on the basis of absence of semen mentioned in the forensic report that the woman was not raped.
The division bench of Justice Pankaj Mithal and Justice Rajan Roy reminded the officials about the definition of rape, as legally the presence of semen is not necessarily required to establish that the said offence has taken place.

The CBI took over investigation on October 11 and formed a special team under the Ghaziabad unit to probe the case.

The 20-year-old Dalit woman was allegedly raped by the four men from the so-called upper caste community in Hathras on September 14. She later died due to her injuries at a hospital in Delhi. The victim was cremated near her home on September 30.

The handling of the case by Uttar Pradesh Police – particularly the late-night cremation of the victim allegedly without the family’s approval – led to angry protests across the country. The officials, however, said the cremation was done “as per the wishes of the family”.

In October, the Supreme Court said the Allahabad High Court will monitor the probe conducted by the CBI (Central Bureau of Investigation)

The main accused had written to the Uttar Pradesh police from jail, claiming that he and the three other accused are being framed in the case and sought “justice” for the four men. He also accused the woman’s mother and brother of torturing her. The woman’s family has denied these allegations.

Earlier this week, the CBI sought more time to conclude its investigation following which the Lucknow Bench of the Allahabad High Court on Wednesday fixed January 27 as the next date of hearing in the case