Central Government Ensnares Itself In Northeast and Kashmir 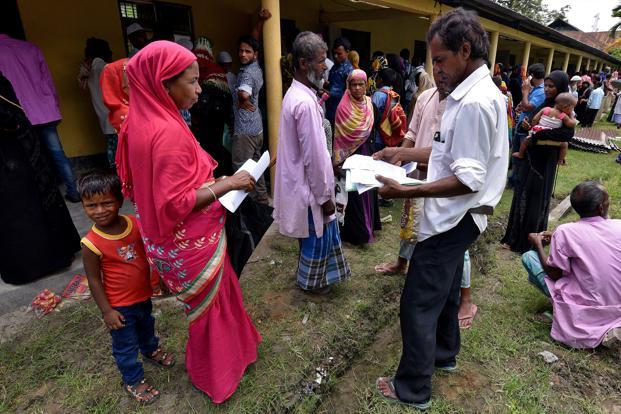 First the Bhartiya Janata Party led government in Delhi was very enthusiastic about conducting the National Register of Citizens exercise in Assam on the premise that this process will identify all the illegal migrants from Bangladesh who entered Assam after 24 March, 1971, the date of creation on Bangladesh, who could then be sent back to Bangladesh. The assumption was that most of these illegal immigrants would be Muslims. However, the government developed cold feet after it realised that among the 40.07 lakhs people who have been left out of NRC the majority are not Muslims but Hindus. Now it is trying to push the Citizenship (Amendment) Bill which will allow non-Muslim citizens from Afghanistan, Bangladesh and Pakistan who arrived in India on or before December 31, 2014 to acquire Indian citizenship easily. This Bill is facing stiff opposition from the Assamese society. Akhil Gogoi, leader of Krishak Mukti Sangram Samiti, along with 70 other organisations has launched a frontal attack on the government. What the BJP central leadership doesn’t realise is that Assamese society is not divided on communal lines like in Gujarat, Maharashtra or portion of the Hindi speaking heartland. For Assamese people bigger fear is linguistic and cultural domination by Bengalis. Assamese society itself is a product of assimilation of locals with outsiders from diverse backgrounds. It is not just being born into some homogenous community. But they clearly make a distinction between people who came before 1971 and those who came afterwards. Assamese nationality is as assertive as the Tamil or Bangali nationality with a distinct identity.

Meanwhile, in Assam itself All Bodo Students’ Association under the leadership of Pramod Boro is demanding a separate statehood for Bodoland. After a long struggle Bodoland Territorial Council was created in 2003 comprising four districts of Chirang, Buxa, Kokrajhar and Udlagiri. Out of 40 government departments all except Home and Finance were transferred to BTC by the Assam government. However, Assam government continues to maintain its stranglehold on BTC as all resolutions passed by BTC are subject to final approval of the Assam assembly, which is against the spirit of Schedule VI of Constitution as part of which BTC was created. So far except for one out of 28, all Bills passed by BTC have been stuck at the Assam assembly level. Even though the population living in abovementioned four districts is 12% of Assam population only 2% of the state budget is allocated to BTC. Schools are being starved of teachers and textbooks in Bodo language. Same is the situation with other departments. Rampant corruption prevents whatever little benefits can reach people. Hence Bodo people are now disillusioned and feel only as a separate state they can prosper. In recent talks with Home minister it is believed that Indian government has offered a Union Territory status to Bodoland but that is not acceptable to the Bodos.

In the neighbouring Nagaland the popular demand is for autonomy. Peace talks have been going on with the Government of India of various Naga groups for the last 21 years without any resolution. The latest rounds of talks with the Modi government seem to have reached some conclusion. But Naga people are very clear that they want a separate Constitution and a separate flag. They see themselves living not under the Indian Constitution but in a peaceful coexistence with India. The Nagas have never considered themselves to be part of India. They feel they were first divided into two countries – India and Myanmar – by the British and then by India into different states like Nagaland, Arunachal Pradesh, Manipur, Assam and Mizoram. They aspire for a separate sovereign identity.

However, the experience of Kashmiris with a separate Constitution has not been very good. All the promises made by the Government of India at the time of signing of Instrument of Accession by the Maharaja Hari Singh have been violated. The separate flag is still there but it doesn’t have the sanctity the flag of a sovereign state should have. It is difficult to even obtain a copy of the Jammu and Kashmir Constitution now. Articles 370 and 35A of Indian Constitution which grant a special status to J&K are there only for namesake. Famous literature personality Zareef Ahmad Zareef described it as a lock on a door to a room which doesn’t have anything inside. People of Kashmir feel cheated by the GoI. According to initial agreement except for Defence, Communications and Foreign Affairs in the matter of other subjects sovereignty was supposed to rest with J&K Government. The will of the people of J&K which was to determine its future has been given a short shrift. The use of pellet guns on people of Kashmir was the ultimate inhuman treatment meted out to them. It is unthinkable that GoI could have used these pellet guns on any unruly crowd anywhere else in the country. It is an example of the step-motherly treatment towards people of J&K. People pelting stones at security forces were accused by GoI of having accepted money from Pakistan. There can be nothing more ridiculous than this. This is admitting the fact that Pakistan is able to control each and every individual in Kashmir. Question arises what were the security forces and intelligence agencies doing? And if religion is the basis on which Pakistan has been able to steer people towards its side why isn’t India able to convince people of Nepal of its point of view. It is an open fact that Nepalese people harbour an anti-India feeling, especially after India blockaded supplies to Nepal when Nepal refused to budge to the Indian wish of making amendments in their new Constitution to favour the pro-India Madhesi people. During the Modi regime situation has worsened in J&K. Even people who had moved closer to integration with India position from a position of autonomy are now finding it difficult to accept the Indian hegemony. The GoI has hurt the sentiments of people of Kashmir beyond repair.

(Note: This article has been written after the visit of ‘Protect and Honour Constitution’ yatra of National Alliance of People’s Movements to Assam, Nagaland and Jammu & Kashmir)