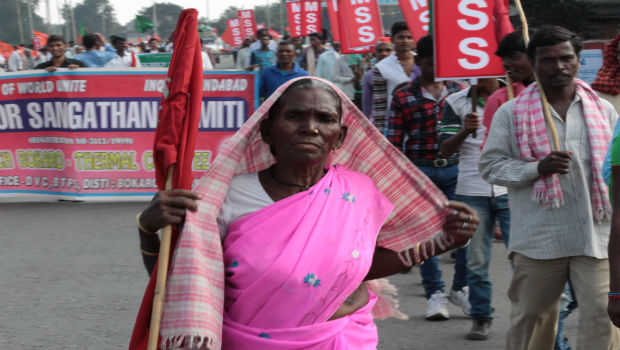 The Joint Platform of Central Trade Unions and Federations/Associations vehemently denounces the blanket exemptions given to all establishments from the employers’ obligation under all substantive labour laws for a period of three years by the state governments of Uttar Pradesh and Madhya Pradesh. In UP already the Ordinance in this regard has been promulgated and same is going to be done in Madhya Pradesh also as asserted by the Chief Minister there.. Media report has also indicated that similar move of liberating the employers from all labour laws is going to be initiated in Gujarat also for a period of 1200 days, i.e., more than three years.

As the mass of the working people have been subjected to inhuman sufferings owing to loss of jobs, loss of wages, eviction from residences etc reducing them to hungry non-entities in the process of 45 days lockdown, the Govt of the day at the centre has pounced upon those working people only with fangs and claws to reduce them to the stature of virtual slaves. In desperation the migrant workers have been walking for several hundreds of miles on roads, on railway tracks, through fields and jungles to reach their homes with several precious lives lost on the way due to hunger, exhaustion and accidents. Now the Government at the centre has taken the strategy of letting lose their pliant state governments to take such anti-worker and anti-people autocratic measures, many other state governments are expected to follow suit.

The Madhya Pradesh Chief Minister has announced the decision to exempt the employers from their substantive  obligations under various labour laws like  Factories Act, Madhya Pradesh Industrial Relations Act and Industrial Disputes Act, Contract Labour Act etc  through appropriate amendments by executive order or Ordinance for a period of 1000 days, i.e., three years empowering the employers to hire and fire workers “at their convenience”; and there will be no labour department’s intervention in the establishments during the said period.  Not only that, the employers were also exempted from payment of Rs 80/- per labourer to Madhya Pradesh Labour Welfare Board.

Similarly the Uttar Pradesh Government has already issued Ordinance to exempting all establishments in the state from all 38 labour laws in vogue in the state for a period of three years barring four.

This retrograde anti-worker move came in the second stage after six state governments have enhanced the daily working hours from eight hours to 12 hours through executive order in violation of the Factories Act, taking advantage of the lockdown situation. It is also reported that BJP  Government  of Tripura is also making similar move..

Central Trade Unions consider these moves  as an inhuman crime and brutality on the working people, besides being gross violation of the Right to Freedom of Association(ILO Convention 87), Rights to Collective Bargaining( ILO Convention 98) and also the internationally accepted norm of eight hour working day – espoused by Core Conventions of International  Labour  Organisation  (ILO). The ILO Convention 144 in regard to Tripartism has also been undermined by the  Government.  While seriously considering to lodge a complaint to ILO on these misdeeds of the Government for gross violation of Labour Standards, Central Trade Unions calls upon the working class to oppose these designs of imposing slavery on the workers and employees in the interests of the employers’ class through united agitation and prepare for countrywide resistance struggle both at workplace level and at national level. We note with satisfaction that the unions in the states are already on agitation path independently and unitedly and soon the CTUs would give a nationwide call  of action.

And Together with the Federations and Associations of various sectors