The caste-annihilation movement must guard against threats from the State and from ‘within’.

Eighteen months after the start of the countrywide #JusticeForRohithVemula movement and 12 months after the radical response of the Gujarati Dalit to the Una atrocity, the upsurge of anti-caste protests led by militant Dalit organisations shows no signs of abating.

The ongoing Azadi Kooch (Freedom March) in Gujarat from July 11 to July 18, 2017, commemorating the first anniversary of the public stripping and thrashing of seven Dalits by gau rakshaks of Una town, is perhaps emblematic of this process.

Led by young lawyer Jignesh Mevani of the Rashtriya Dalit Adhikar Manch (RDAM), it encompasses a wide-ranging coalition of Dalits, Muslims, Patidars and others and has been joined by activists of various shades from throughout the country, including student leader Kanhaiya Kumar of JNU. Despite cancellation of permissions and detention of all participants at the very start of the seven-day march, it determinedly soldiers on.

This has been preceded by several months of militant Dalit resistance to Thakur-led onslaughts in and around Saharanpur in western Uttar Pradesh. It was spearheaded by the Bhim Army, led by another young lawyer, Chandrashekhar Azad.

One of the high points of this resistance was a 50,000 strong gathering on May 21, 2017, at Delhi’s Jantar Mantar, one of the largest agitational mobilisations seen in the capital in recent times.

This rally, held in the shadow of an imminent offensive by the state, saw Chandrashekhar and Mevani together on stage appealing to the crowds to take ahead the movement. Two weeks later, Chandrashekhar and a yet undisclosed number of Bhim Army activists were held, amid a total clampdown, including an indefinite internet blackout.

Chandrashekhar, in anticipation, had concluded his address at Jantar Mantar by prophesising, “I want to say that if they try to kill one Chandrashekhar, there will be lakhs more to rise.”

His statement well embodies the audacity of hope that such a movement on the ascent has, and must have. This obligatory optimism must however also confront the enormity of the challenges before any movement possessed with the mission of annihilation of caste in this country. 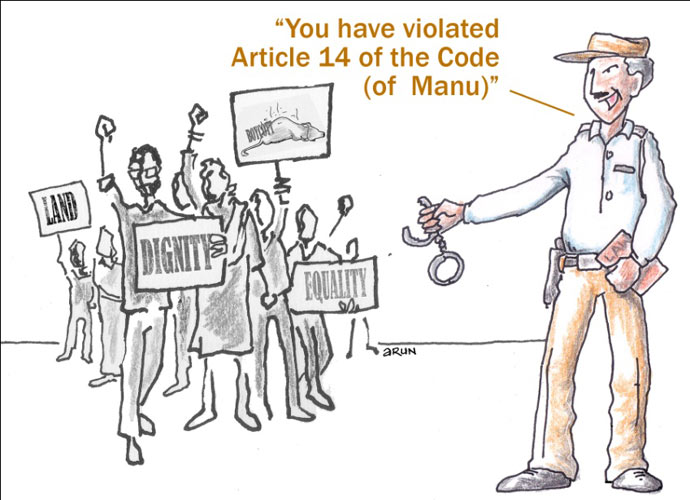 The threats and challenges before the contemporary anti-caste movement are broadly of two types: the first being the open attacks and repression of the dominant feudal castes and the State machinery that stands solidly behind them; the second being the surreptitious, sabotaging, interventions from “within” by those sections of the oppressed castes whose interests lie in holding back the movement’s creativity and militancy, and diverting it into acceptable channels.

It is no secret that the very State machinery that is supposed to implement constitutional provisions and laws for the abolition of caste, is itself deeply wedded to the preservation of the caste system. It is thus extremely rare for the perpetrators of upper caste violence to face action from the coercive arms of the state. Police authorities do not easily register complaints of caste atrocity. If they do, the cases are diluted and it is common to file false counter-cases against the victim.

If, on the other hand, should the oppressed dare to show some militancy in resistance, they must be ready to face all the vehement violence that the security agencies are capable of – lathi-charges, firing, implication in false cases under draconian laws, and even torture. These brutalities are sought to be rationalised by first branding the anti-caste organisations and their leaders as Naxalites. Once this label is stuck, it is seen as fair justification for any cruelty and the abandonment of the rule of law.

Both Jignesh and Chandrashekhar have seen this branding. Jigneshsays: “A Dalit activist is conveniently labelled a Naxalite.”

Chandrashekhar goes one step further. He told the May 21 crowds at Jantar Mantar: “If anyone speaks of justice these people call him Naxalite and terrorist.”

While denying being one, he warned his oppressors not to test the patience of the oppressed, thus implying that they would, if necessary, take such steps.

He even used the imagery of Udham Singh, the revolutionary who assassinated British governor O’Dwyer, to promise retaliatory violence on those involved in caste atrocities.

However, Chandrashekhar is now in prison with several cases clamped on him, and the cases against Jignesh too are steadily building up. This will call for answers from the anti-caste movement to the state violence that is bound to be its constant companion.

One of the answers has been Chandrashekhar’s earlier mentioned pronouncement that “lakhs more will rise” to replace him. He is thus telling the casteists and the State that attacks and repression will only inspire many more to join the movement. While not denying the historical truism in his statement, there will yet be the need for more practical and immediate solutions.

The attempts underway to rapidly ramp up the organisational structure of the movement in both Gujarat and UP is one of the answers. The solidification of genuine solidarities and the emergence and spread of similar struggles in other centres could be others.

The other challenge, that is emerging from some members of the oppressed castes, is however more complicated. It lacks the simplicity of direct confrontation that is there in the contradiction with the violent caste oppressor and state repressor.

Over the years there has been an extremely tiny segment of Dalits who have earned places high up in the structures of the state and academia. Ruling politicians, high-ranking officers of the IAS, IPS and other services, and professors inhabiting the upper echelons of elitist academic institutions in India and abroad are typical of those who have been able to occupy seats at centres where opinions, decisions and policies are formulated.

Most of them have the natural aversion to fundamental transformation that is characteristic of people in high places. Though their caste origins compel them to pay lip service to the revolutionary mission of annihilation of caste, they have long abandoned that project. They typically seek to confine themselves to lobbying and adjustments that could strengthen their position without significantly displacing contemporary social structures and power relations.

They thus are among those who feel highly threatened by radical movements which aim to shake up and demolish the existing caste order. In the face of such upsurges they see their role as interveners, who can ensure that things do not go “out of hand”. Though extremely small in number, they, by virtue of their positions of relative power, demand and command considerable influence, within Dalit communities as well as organisations. They use that influence to control and contain the movement within limits that do not threaten the existing order of things. Such a role was played by a coterie of Dalit IAS-IPS officers during the #JusticeForRohithVemula movement. They pooled money, expressed support on social media and directly established connections with the students. Their expressed purpose however was clearly expressed as “Ambedkarisation, not radicalisation”. By thus counterposing “Ambedkar” and “radical” they were clear that they wanted to keep #JusticeForRohithVemula well away from Ambedkar’s radical mission of annihilation of caste.

A member of this group is RS Praveen Kumar, an IPS officer who, when asked about the ongoing anti-caste movement, has expressed a desire to play the role of keeping it within constitutional means. His own past however has seen involvement in numerous fake encounters of Naxalites, with scant respect for constitutional guarantees and rule of law.

One explanation of the thinking underlying this is provided by Suryakant Waghmore, a professor at top-rung institutions like Tata Institute of Social Sciences and IIT-Bombay. While analysing the Bhim Army and its “rhetoric of “hitting back”, he propounds that “use of violence undermines the Dalit cause and emancipatory politics”.

In a classic convoluted argument typical of academia, he, while arguing that the Bhim Army should refrain from violence because the law-implementing machinery will target Dalits, in the same breath proposes that the “Dalit response to atrocities is one of legal measures”. This means that he is telling the Dalit victims to go for justice to the same law-implementing machinery that targets them.

Suryakant also bases his argument of non-violence on the premise that the aim of Dalit movements is to mobilise towards civilising the oppressor (caste Hindus). The absurdity of expecting that the Thakurs of Saharanpur would be amenable to being “civilised” by its Dalits is lost on him. Any farcical prescription to embark on a mission to civilise the oppressor has nothing to offer to the Bhim Army or any other movement serious about the annihilation of caste.

As the ongoing anti-caste movement grows in strength, the impact of such arguments on it has so far been minimal. But the leadership would have to be vigilant to guard against the confusion and diversion they have the potential to cause.http://www.dailyo.in/politics/bhim-army-azadi-kooch-dalit-una-naxalites-rohith-vemula-caste-system/story/1/18414.html