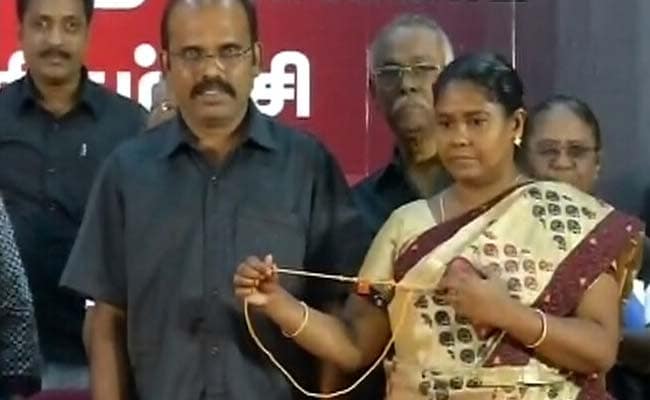 CHENNAI:  A group of 21 women voluntarily removed their mangalsutras at 6.45 am today in Chennai; then came the news that  the Madras High Court had  cancelled  permission for the event.

The Dravidar Kazhagam – an organization which says it is committed to promoting the ideology of rationalist leader Periyar, had planned  a twin protest  today.  “A  beef banquet”  was meant to express its opposition to the ban on beef introduced in Maharashtra.  The group had also said that nearly  170 couples would stand in solidarity as wives  removed their mangalsutras or  “thalis” – a sacred thread worn by married women – because it is a symbol of a woman’s enslavery.

After protests by Hindu groups, the event was banned by the local police which said communal tension could be inflamed, but last evening, a judge at the Madras High Court said the Dravidar Kazhagam’s right to freedom of expression must be upheld.  That decision was overruled this morning by two other judges on the basis of an appeal by the state government.

The Dravidar Kazhagam planned its protests after a television channel discussing the relevance of the mangalsutra in modern society was targeted with crude bombs at its Chennai office.

“We will seek legal remedy,” said Dravidar Kazhagam chief K Veeramani today. “We will not defy the court order…we are against any curb on freedom of expression,” he added.

Meet the Young Wife Who Removed Her Mangalsutra 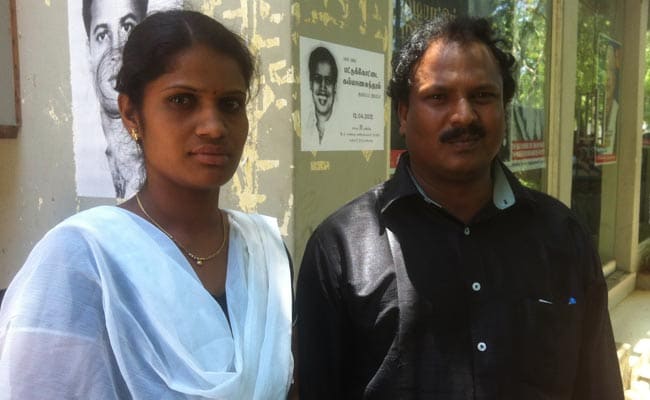 27-year-old Sangeetha, a teacher, removed her mangalsutra after eight years of marriage

CHENNAI:  27-year-old Sangeetha removed her mangalsutra – a sacred thread worn around the neck by married women – after eight years of marriage. “Why don’t men wear mangalsutra? Why should women be enslaved this way? It’s not that only if I wear mangalsutra, he’s my husband. It’s enough if we are happy and faithful,” she said.

A teacher by profession, Sangeetha was among the 21 women who voluntarily took off their mangalsutras or “thalis” early on Tuesday morning in Chennai as part of a protest planned by Dravidar Kazhagam, an organisation which says it is committed to promoting the ideology of rationalist leader Periyar.

Her husband, who was already a member of the movement when they got married, stood firmly beside her. “I never asked her to come or read any books. I never thrust anything. It was her decision,” said Krishnamoorthy, also a teacher.

Sangeetha says that over the years, she read and accepted Periyar’s views who had said that the mangalsutra was a symbol of a woman’s enslavery and the man’s control over his wife’s body.

The Dravidar Kazhagam planned its protests after a television channel discussing the relevance of the mangalsutra in modern society was targeted with crude bombs at its Chennai office.

However, the protest was banned soon after the Madras High Court stayed permission for the event, overruling its earlier order. Around 150 couples had gathered to participate in the event.

“Liberty to think and the freedom of expression are being snatched away. These are guaranteed by the Constitution. We wouldn’t defy but would approach appropriate legal forum,” said Dr Veeramani, President of Dravidar Kazhagam.

The organization has been holding this ritual for the last 80 years. But the Tamil Nadu government banned it this year, contending that it would hurt religious sentiments and incite communal tension.

India - How have the Courts treated Women this past year?
NYPD arrests for singing ? #FOE #WTFnews
Why the NDTV Ban Was Put On Hold
Gujarat- Voice of Victims #Narendramodi