#ChennaiOilSpill: Why is nobody asking how did it happen?

When only one ship is allowed to enter or exit the port at one point in time, how did two get a green signal to move?

Akshaya Nath
After six days of waiting, the oil spill caused by the collision of two ships — one oil and the other an LPG tanker — near the Kamarajar Port in Chennai‘s Ennore has found a space in the national discourse.

While most of us journalists in the state have been talking about how we have been cursed to spend our working hours off the coast of Bay of Bengal since December 6, 2016 (first after the demise of former CM J Jayalalithaa and then the pro-Jallikattu protests), this time around there is no certainty as to when can we end our beach hopping from Ennore to Marina to Besant Nagar to Tiruvanmiyur beach and back to the starting point. 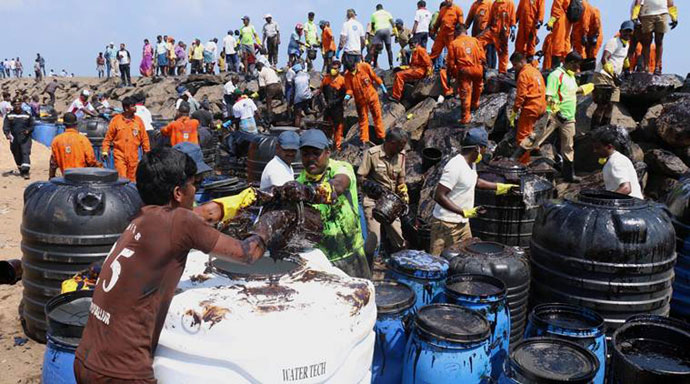 The oil slick is being removed manually using buckets. (Credit: PTI Photo)
January 28, when the news of the collision spread, Kamarajar Port was quick in sending out a statement that read, “no damage to the environment like oil pollution”.

On January 29, fishermen and morning visitors to beaches were shocked to find thick dark patches of oil marks all over the place, and slowly again the news of the oil leak started to spread. But again the intensity of the leak was downplayed when Union minister Pon Radhakrishnan visited the location and reiterated the statement by Kamarajar Port.

When large patches of oil started to hit the rocky shores close to Bharathiyar Nagar (approximately 13 km from the Kamarajar Port by road) and the cleaning process started, the intensity of the disaster became apparent. Lack of proper action plan by the government was evident when fishermen and volunteers in the nearby areas started helping the coast guards in the manual cleaning process.

Two pumps that were deployed to clean up the spill did not serve the purpose. “Even if it is a minor spill, we have been completely out-majored by it. If we are out of our depth even to tackle a minor spill, I don’t know what will happen if there is something major,” said environmentalist Nityanand Jayaraman. 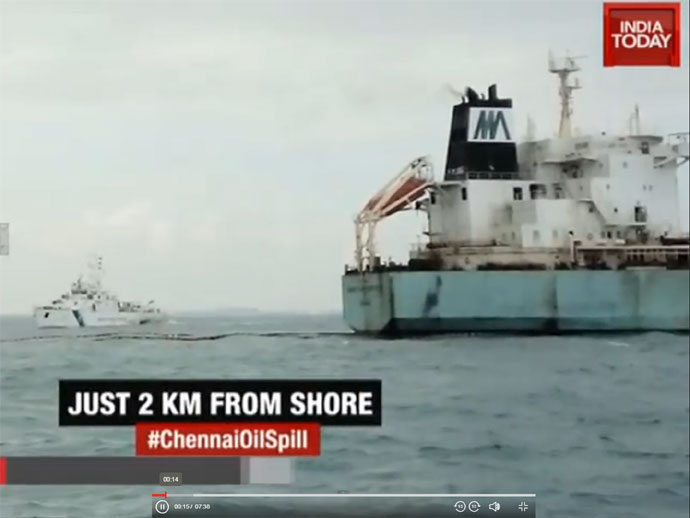 Screengrab: India Today TV
In 1993, the government of India had made the Indian Coast Guard as the Central Coordinating Authority and approved the National Oil Spill Disaster Contingency Plan (NOS-DCP) and in 2015, the plan was revised to meet international standards.

But the situation in Ennore is reflective of how this plan has not been successful in practical terms, but only on papers.

The lack of necessary technology to assess the situation or to contain the spill also shows the lack of preparedness and a quick response system.

Initially, the Kamarajar Port sent out a statement claiming “no damage” and later Union minister Radhakrishnan repeated the same.

On Tuesday (January 31), Tamil Nadu fisheries minister D Jayakumar had estimated the oil spill to be around 1 tonne. But by February 2, the Indian National Centre for Ocean Information Services (INCOIS) said that 40 tonne of oil sludge and 27 tonne of oil mixture and water have been removed. “We need to be worried about the lack of transparency and the refusal of the authorities involved in this to act responsibly. I think that should worry us more because these are the people who downplay a nuclear disaster or a gas leak disaster (Union Carbide). If the oil spill is major or minor is immaterial to me, the fact that there is no contingency plan, action or clarity is worrisome,” adds Nityanand.

So, how did the accident happen?

While we have been talking about the spill and the impact it has on the ecosystem and livelihood of the fishing community, one question that not many seem to be asking is how did it happen? According to rules, only one ship can enter or exit the port at one point in time. Then how did both the ships get a green signal to move? Or was one of the ships violating instructions?

The port authorities have been downplaying the incident from day one. Though both the ships have been asked to be stationed at the port till the completion of the investigation by the Madras High Court, what action will be taken against the owners of these ships?

When will the investigation conclude and will the affected be compensated? All these remain unanswered. After the 2015 floods in Chennai, though an investigation was ordered to look into encroachments, there has still been no action. Will Ennore meet the same fate?