Chharanagar police brutality to be turned into a play #Artivism

Theatrewallah Daxin Bajarange may turn the story of alleged police brutality in Ahmedabad’s Chharanagar last month into a new play.Budhan is a good example of why we need politically explicit theatre in this day and age. The play is based on a 1998 judgment about the police torture that had resulted in the custodial death of Budhan Sabar in Purulia. Theatrewallah and filmmaker Daxin Bajarange mounted a play production which had the backing of linguist Dr Ganesh Devy and litterateur Mahashweta Devi. Budhan’s death was staged in front of a police chowki and it was a huge hit.

Bajarange and his motley crew of Chhara theatrewallahs decided to call their group, Budhan Natya Manch. When I saw the play, it had completed 300 shows in and around Ahmedabad. The play was performed in schools, colleges, institutes, and at seminars and theatre festivals. It changed the way street theatre was perceived.

Twenty years later, fact collided with fable. On the night of July 26, after a fracas with two locals in Ahmedabad’s Chharanagar, the police unleashed its wrath on the entire community. They detained and booked 29 troublemakers at Sardarnagar police station. The charges: rioting and attacking law enforcement authorities.

The 29 include Atish Indrekar Chhara, a young actor who plays the role of Budhan. On August 1, eight of the 29 were released on bail following pressure from local lawyers, journalists and artists. During their 96 hours in prison, Atish was probably reminiscing about yet another play Encounter. This is the real life story of Deepak Pawar’s death in a police encounter. Deepak belonged to the Paradhi community of beggars. He did not know how to ride a bicycle but he was killed on charges of driving a truck loaded with arms and ammunition.

According to Bajarange, Encounter and the photographs of Deepak Pawar’s encounter tell “the non-official story”. Just as a fact-finding report of the Chharanagar incident, presents a parallel universe.

Case in point is the police statement. It says, “PSI Mori and a head constable had gone to Chharanagar in a private car to conduct raids when at least 150-200 Chharas attacked and assaulted and looted them. We sent our vehicles and combed the entire area and rounded them up.

Everything happened after midnight.” Bajarange says, “There were over 500 policemen who gate-crashed into people’s homes and beat them up. Three people, including a woman, who were assaulted by cops, were taken to civil hospital in 108 (ambulance). Even these complainants were picked up from the civil hospital and taken to the police station. Theatre artists and press photographers were among those detained.”

On August 3, an Abhivyakti Jan Aakrosh Samelan was organised in Chharanagar to present the fact-finding reports and a charter of demands. The meeting did not take place. There was no police permission. Mushtaque Ali Sheikh, culture activist who was present to sing songs of solidarity, including a stirring poem about Atish, says, “We live in surreal times.”

I ask Sheikh why so? He says, “Most of the group members belong to the Chhara tribe in Gujarat, which is a denotified tribe. But I call them saara (good), not Chhara. Society says they are born criminals. I say, they are born actors.”

Sheikh repeats this, thrice. There is a reason. According to Sheikh, mainstream media tends to demonise the community “as men who resort to petty theft and women who beg, and who brew and sell illicit liquor.” In 1959, the tribe was monitored under the Habitual Offenders Act. This gave unlimited power to the police. Most of the custodial deaths in the country are made up of de-notified tribesmen.

Budhan has passed on the theatre baton to nine theatre groups. Sudhanva Deshpande, Delhi-based actor and publisher says, “I visited Chharanagar a few years ago and was amazed at the social transformation that Budhan has been the fulcrum of. The reading room and library was full of children late into the evening, reading with focus and attention. I saw the pride and sense of belonging that the elders in the community had towards the theatre and all its cultural activities. It was an eye opener for me. In any other country, Chharanagar would be considered an immense success story of urban regeneration and cultural empowerment, a gem to show off to the world. However, Chharanagar is criminalised, attacked, humiliated and brutalised.”

Bajarange has a film to be released. It is a political thriller called Sameer about a student who is arrested by the ATS and is forced to find his roommate, the mastermind of the Hyderabad and the Bengaluru bombblasts. Instead, he, along with a few Gandhians, peace activists, and fifty members of Budhan Natya Manch are seated in a huddle. Someone says, “Reality is a monster. Sooner or later she will devour all of us. Especially people like us who resist her.” On cue, a counter view is expressed that there is only one way to be free — to vanquish her. And in this way, a plan is conjured to stage one more play — That night of 26 July! 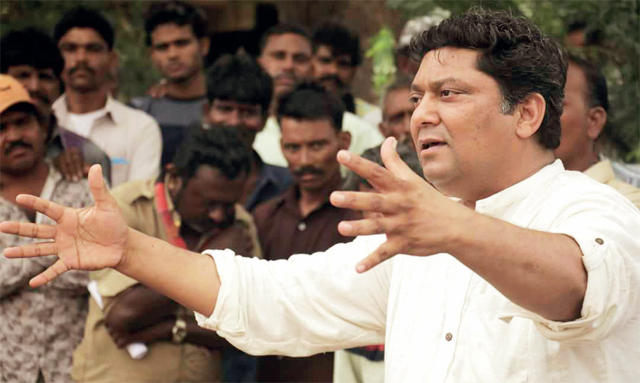