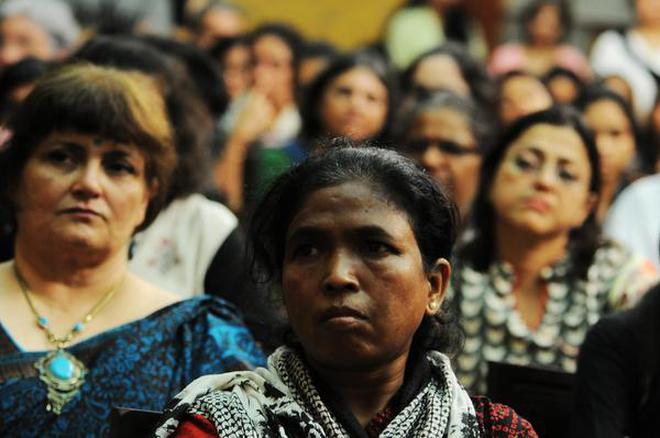 Special Correspondent Tribal activist and Aam Aadmi Party leader in Chhattisgarh Soni Sori on Wednesday accused the security forces of killing 15 “innocent civilians” in the name of an anti-Maoist operation in Sukma district of south Chhattisgarh.

Chhattisgarh police claimed to have killed 15 alleged Maoists in an operation in Konta area of Sukma district on Monday.

Special Director General of Police, Anti-Naxal Operations D.M Awasthi said around 20 to 25 “Maoists’ militia members” of three formations were camping near Nalaktong village of Sukma on Monday morning. Out of these 15 were killed in an exchange of fire with a joint team of the District Reserve Guard and the STF between 6 to 7 am.

Bastar range Inspector General of Police Vivekanand Sinha had claimed that the exchange of fire lasted two hours and the Maoists had initiated the firing forcing the security forces to retaliate.

However, Ms. Sori alleged that not a single person out of the 15 killed in Monday’s “encounter” was a Maoist.

“An operation was launched in that area on Sunday. Due to the fear that the security forces will harass them, some villagers gathered at one place on the intervening night of Sunday and Monday. On Monday morning, the villagers saw the security forces and panicked. The security forces opened indiscriminate fire on these people. Six people of Nulkatong village, seven of Gompad, one villager each of Villapocha and Kindram were killed in the firing,” Ms.Sori told The Hindu.

She claimed that she met the family members of all the deceased men in Sukma on Monday.

“They (family members) told me that none of the villagers was carrying any weapon or fired at the security forces. They tried to hide and run away fearing harassment by the forces. They were not Maoists. An independent inquiry is needed. If they were really Maoists, how come none of them had a single automatic weapon in a group of 15? The 15 dead included two brothers and seven teenagers. We appeal to all the political parties, independent organisations, and the media to visit this area and verify the facts,” Ms. Sori said.

AAP’s Chhattisgarh convener Sanket Thakur informed that the party will send a fact-finding team to the spot.