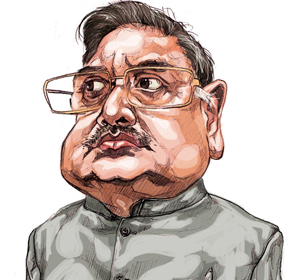 Amidst a crackdown on slaughterhouses in Uttar Pradesh, Chhattisgarh Chief Minister Raman Singh has said that ‘will hang those who kill (cows)’.

The chief minister was answering to a reporter who asked him if any law against cowslaughter is going to being planned to put in place in Chhattisgarh.

#WATCH: Chhattisgarh CM Raman Singh says ‘will hang those who kill (cows)’ when asked will Chhattisgarh make any law against cow slaughter. pic.twitter.com/V5fdNs4CEk

AIMIM leader Asaduddin Owaisi, meanwhile, has accused the BJP of “hypocrisy”. “In U.P., cow is mummy, and in the northeastern states, it’s yummy. This shows BJP’s hypocrisy. While they are talking about a beef ban in U.P., they have said there would be no such thing in the northeast.”

“Assembly elections are going to be held in three states in the northeast. Beef is easily available in (BJP-ruled) Goa. You tell me what is this,” he told a TV news channel. BJP Rajya Sabha member Subramanian Swamy said, “Article 48 says cow slaughter will be prohibited. Let him say he has no faith in some articles of the Constitution, then we will see,” he said.

After becoming the chief minister of the tribal state in December 2003, he had banned the slaughter of cows, buffaloes and bulls.

Even possession of meat and transportation of animals for slaughter in other states is not permissible under the state laws. The offence invites punishment of seven years in jail and a fine of up to Rs 50,000.

Ahead of the elections later this year, the Gujarat Assembly on Friday passed an amendment to the Gujarat Animal Preservation Act of 1954, enhancing maximum punishment for cow slaughter to life imprisonment and a fine of up to Rs 5 lakh. Under the tweaked law, cow slaughter has become a non-bailable offence in Gujarat.

Since the Narendra Modi government came to power in 2014, the issue of the protection of cows, considered sacred by the Hindus, has been raised on several occasions, and also lead to attacks on Muslims over consumption of beef.

In December, the Union environment ministry wrote to the department of animal husbandry to consider the option of enacting a national law to ban the slaughter and sale of cow meat.
The BJP-ruled states of Maharashtra and Haryana have banned the sale of beef since Modi became the prime minister.