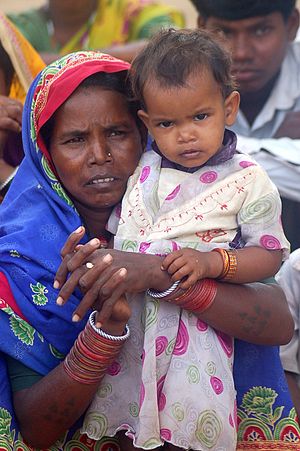 IN Chhattisgarh’s Bastar region, the police first brand young tribal women as Naxalite sympathisers and use this ruse to raid their homes and villages. (Women recruits in Maoist camps are not allowed to marry or become pregnant). It is when a young woman beseeches the cops that she is not a Maoist and that she is a mother, the law-enforcers demand proof. So they squeeze her breasts to verify that she is not telling a lie. Obviously, the “anti-national” slur is only a ploy to satiate their crude, carnal pleasures, inflicting deeps wounds into the psyche of the hapless women.

On January 31, Gayathiri Bose, a 33-year-old Singaporean mother, was forced to lactate by security officials at Frankfurt airport (en route Paris) to prove that she was still breastfeeding as they thought her breast pump was suspicious. She was travelling without her baby due to some domestic reasons. Bose told BBC that she was forced to go into a private room for questioning with a female officer where she was told to open her blouse, show her breast and squeeze it. After a 45-minute ordeal she was allowed to board her flight to Paris. Bose said she left ‘humiliated’ and is considering legal action. Bose is educated, articulate and well-off and may pursue her tormentors, and make a fortune out of a possible damage suit. The German official’s conduct is deplorable even if it was spurred by the looming shadow of global terrorism.

If you are shocked to hear about the humiliation of Gayathiri Bose, hold your breath; you will be even more jolted to read about what is happening in our own backyard. In Frankfurt, Bose was told to lactate by a “woman officer”, who did not touch her breast. In Chhattisgarh’s Bastar region, policemen, yes you heard right (male cops), squeeze the breasts of young tribal women to “certify” that they are lactating. Even more disgusting is the fact that women’s breasts are fondled and squeezed in the pretext of “anti-national operations” by gun-toting, fun-loving male cops. The police first brand them as Naxalite sympathisers and use this ruse to raid their homes and villages. (Women recruits in Maoist camps are not allowed to marry or become pregnant). It is when a young woman beseeches the cops that she is not a Maoist and that she is a mother, the law-enforcers demand proof. So they squeeze her breasts to verify that she is not telling a lie. Obviously, the “anti-national” slur is only a ploy to satiate their crude, carnal pleasures, inflicting deeps wounds into the psyche of the hapless women.

A group of tribal women in a village in Bastar, recently narrated their demeaning existence to television journalist Tanushree Pandey of CNN-News 18. Huddled in a remote forested area, shamed and vulnerable, the victims recounted their horror stories (that they endured between October 2015 and January 2016) to News 18, the only channel that traversed 1500-odd km to talk to the abused women caught between a ruthless police and the Maoists. “I was four months pregnant when I was raped. They (the security forces) did not care I was pregnant,” said a feeble voice, her face blurred by the channel. Another said, she had just delivered (eight hours before) and lactating. “They were not convinced and a cop squeezed my breasts to see if there was milk.” Another woman said “they groped me, sexually assaulted and beat me.”  Yet another said “Four men blindfolded me and raped me, later they left me unconscious…” The women said the police also “loot their homes in the name of search” for Maoists. Some rued that their houses were “hijacked” by the security men and “we could not enter our own houses”.

These incidents have been happening for quite some time away from civilisational glare. Unfortunately, they do not make prime time news. With the sole exception of CNN-News 18, no national television channel has aired the abominable acts of the law-enforcers. In TRP obsessed television journalism, a rape in Delhi, Mumbai or Bangalore gets instant, feverish coverage with anchors dissecting every detail of the incident, mouthing simulated indignation. Women and child development minister Maneka Gandhi last Friday demanded President’s rule in Kerala following the rape of a Malayalam film actress near Kochi. Hope she will seek stringent action against Chhattisgarh cops if not President’s rule in the state.

Despite a slew of social welfare schemes, the condition of the downtrodden continues to be abysmal. Even basic human rights are denied. The horror stories from Chhattisgarh invalidate the claims that smaller states are better administered. The situation of the underprivileged is more or less the same in Jharkhand and Telangana also. While in Chhattisgarh, those questioning government policies are branded “anti-nationals” and Maoist sympathisers, in Telangana, they are dubbed “anti-Telangana people”. Last year, the Communist Party of India (Marxist) released a “perspective paper” on alternative development. The party undertook a “mahajana padayatra” in Telangana to canvass and mobilise public support for the slogan “Comprehensive Development of State with Social Justice.” The padayatra crisscrossed some 2000 km in 600-odd villages in two months and received tonnes of inputs from people seeking better alternatives and better governance.

The TRS, which rode to power in 2014 in the emotionally charged elections, has become yet another bourgeoisie party vigorously pursuing globalisation and liberalisation policies even as disparities between people and regions have been widening. According to social scientists, the main reason for the uneven distribution of income in India is the “large sectoral income variations” giving rise to widening regional disparities. The Economic Survey released last month by the finance ministry has mooted Universal Basic Income (in lieu of existing state benefits) to combat poverty. While UBI has become a globally accepted policy concept as an antidote to high inequality and the prospect of job losses due to automation, critics do not fully endorse it. In place of UBI, the CPM has demanded “Universal Basic Entitlement” – as the income is not stable and can evaporate whereas entitlements remain constant and people can always access them for their own utility. Rather than a client-ship paradigm, “equal partnership” programme is best suited in the Indian context, the comrades aver. Development economist Jean Dre’ze though supports the UBI in principle, is also cautious as it could become a “Trojan horse” for dismantling of hard-won entitlements of the underprivileged.