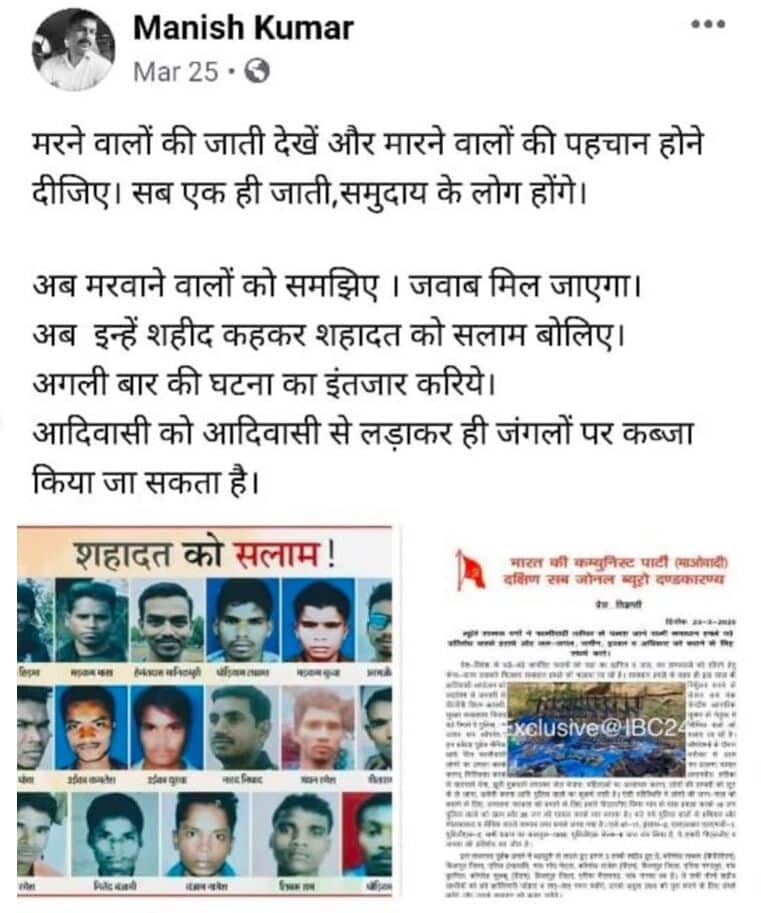 Status of the Human Rights Defender Mr. Manish Kumar Soni (36), resident of Ambikapur, district Sarguja, Chhattisgarh, is
a senior investigative journalist and human rights defender. In his 17-years’ career, he has written articles about common citizens, custodial deaths, Adivasis etc. In 2016,Mr. Soni followed the custodial death cases in the Sarguja and documented how
innocent Adivasis were arrested and tortured to death in the custody. These articles were published in different national and state newspapers. Angered by these articles,a false case against Mr. Soni was lodged in Ambikapur Police station u/s 353 and 186 of the Indian Penal Code (IPC) and he is out on conditional bail. During the COVID lockdown too, he has video graphed many irregularities in the health department work and published in different local web portal and social media.

Date and Place of Incident:
August 16, 2020, Ambikapur police station, Sarguja, Chhattisgarh
Background of the Incident:
On March 25, 2020, journalist Mr. Manish Kumar Soni posted a Facebook post with photos of security forces who had died in naxal attacks which said: “मरने वालों की जाती
देखें और मारनेवालों की पहचान होने दीजजये. सब एक ही जातत, समुदाय के लोग होंगे. अब मरवानेवालो को समझिये. जवाब ममल जायेगा. अब इन्हेशहीद कह कर शहादत को सलाम बोमलये. अगली बार की घटना का इंतज़ार कीजजये. आददवासी को आददवासी से लड़ा कर ही जंगलों पर कब्ज़ा
ककया जा सकता है” (Look at the caste and community of the killed and the identification of the killers. All will turn out to be from the same community. Now try and understand those who are getting them killed. You will get the answers. The jungles can only be
captured by getting the Adivasis to fight against Adivasis)

Details of the Incident:
On August 16, 2020, the Assistant Sub-Inspector of Ambikapur police station, Mr. Rakesh Yadav lodged an FIR (No. 33354002200463) under IPC Sections 153(a) (promoting enimity between classes), 153(b) (imputations, assertions prejudicial to national integration) and 505 (2) (false statement, rumours, with an intent to create enimity) against Mr. Soni for the above-mentioned Facebook post. The FIR states that the police had received a written complaint against Mr. Soni from Mr. Alok Dubey, local
ward member and also associated with the BJP, regarding ‘a provoking post’ by Mr. Soni which was a threat to national integrity. According to the complaint, Mr. Soni’s
Facebook post insulted the Adivasi community and created hatred towards the security forces in the minds of the ordinary citizen and affects national unity and integrity.

Though the police have not yet arrested Mr. Soni, he has been getting repeated calls,harassing and intimidating him, since the FIR has been filed. The HRD alleges that local policemen have threatened him that “if you keep doing such things, you will be
encountered and even your dead body will not be found.” He was called to the police station by the SP Mr. Tilakram Koshima a week after the FIR was filed, who questioned
his credentials as a journalist and warned him to stay away from writing about the police and custodial killings. Mr. Soni even called the IG Police, Mr. Ratanlal Dangi for help, who said he doesn’t know anything about the case, but that the district policemen
will handle the work and you should leave ‘all this.’ He was also warned by the Deputy Protection Officer of the court to take anticipatory bail or the police may arrest him anytime.

We believe that Mr. Soni is being threatened and intimidated for his work as a journalist for his previous record of exposing custodial killings as well as writing the post related
to Adivasis. It is a matter of grave concern that police officials are giving threats of fake encounters and arrests to citizens and journalists. A free media is an extremely important fourth pillar of the Indian democracy. Our Constitution gives every citizen
including journalists the right to exercise freedom of speech. These FIR and intimidation tactics used by functionaries in power are proof of a vendetta against Mr. Manish Kumar and absolutely violate his right to freedom of speech and expression
under Article 19(a) of the Indian Constitution. Freedom to expression is crucial to the work of HRDs. The right to freedom of opinion and expression encompasses three
different aspects:

1) the right to hold opinions without interference;

3) the right to impart information and ideas of all kind. On
the aforesaid it is stated that Declaration on Human Rights Defenders seeks to protect the monitoring and advocacy functions of defenders by recognizing their right to obtain
and disseminate information relevant to the enjoyment of human rights.

Appeal:
The FIR against Mr. Manish Kumar Soni and intimidation by the police officials is an indication of the way the law and power are being grossly misused by certain state officials to intimidate and silence journalists’ freedom of speech and expression, if
unfavourable to the government. We, therefore, urge you to immediately take the necessary steps and:
• Given that it is alleged that Superintendant of Police is also involved in the incident of intimidating and filing fabricated case against Mr. Manish Kumar Soni, direct NHRC’s investigation wing to undertake an independent inquiry as prima-facie an FIR for the Facebook post is a case of misuse of law and power
leading to gross violation of fundamental right to express guaranteed under Article 19 of the Indian Constitution and upheld on several occasions by the courts. Criminalisation of free speech and intimidation by state officials need to be examined by the NHRC’s investigation wing.

• Direct the Director General of Police of Chhattisgarh to consider initiating closing proceedings in the FIR filed on journalist Mr. Manish Kumar Soni for merely posting his views on his social media page which is very well within his Constitutional right.
• Ensure compensation and apology to the defender for the psychological suffering he is undergoing because of the fabricated and motivated case against him.
• Direct the Chief Secretary of Chhattisgarh to create an atmosphere of respect for human rights and fundamental freedoms in accordance with the Universal Declaration of Human Rights and with international human rights instruments
ratified by India is strictly adhered to in the state of Chhattisgarh.