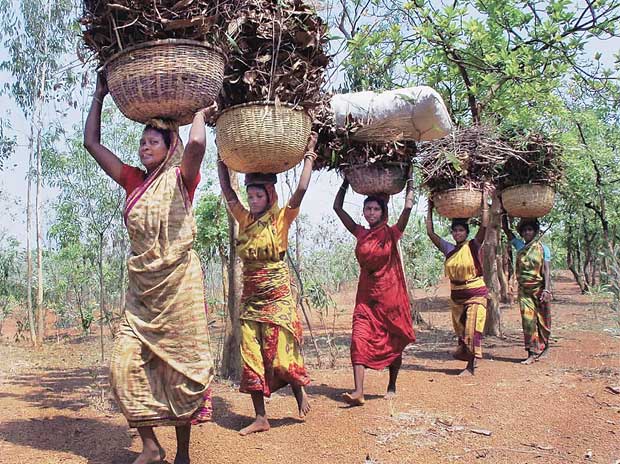 Forest rights of tribals over their traditional lands in Ghatbarra village of Surguja district have been taken away by the Chhattisgarh government to facilitate coal mining of Prasa East and Kete Besan coal block.The block has been allocated to Rajasthan Vidyut Utpadan Nigam Limited (RVUNL) and Adani Minerals Private Limited.

The latter is a 100 per cent subsidiary of Adani Enterprises and RVUNL is a Rajasthan government enterprise.In an order passed on January 8, the government had cancelled the community land rights of the tribals in the village, given under the Forest Rights Act (FRA).

The government, in the order, stated that the villagers had been using their legal rights over the forest land to stop work of mining in their village, which falls in the Parsa East and Kete Besan coal block. It is the first such order to come to light in India, where community rights of tribals have been cancelled after being granted through the process laid down in the FRA.Business Standard reviewed the January 8 orders cancelling the land rights of the tribals in the village.

The Chhattisgarh government and the district authorities, however, did not respond to the queries.The FRA does not provide for revocation of either community or individual land rights once granted under the law. The law and the attendant regulations provide only for the government diverting the forest land for some other purpose after prior consent of the tribals through their gram sabha. Under the FRA, tribals are empowered to claim individual and community rights over forestlands they have traditionally hold on. The gram sabha of Bhatbarra did so and in September 3, 2013 they were handed over the lands by the state government.After that, the village became aware that the coal block could remain susceptible to mining despite the Supreme Court orders cancelling earlier allocations. In October 2014 the gram sabha (village council) of Ghatbarra, along with 19 other villages, took out a formal resolution opposing the mining in their lands.

Under the FRA, the gram sabha is the only authority empowered to decide the future of traditional tribal lands.The FRA also requires that the claims and rights of all tribals and other forest-dwellers are settled before the government looks to remove them under section 4(5) of the law and other rules.But the central government gave the clearance to divert the land for mining in 2012 without settling the rights. Business Standard reviewed the orders of the environment ministry.

One set of orders said the land would be diverted only once the rights of the tribals and others had been settled. But then later orders (called stage 2 forest clearance) handed over the land for mining without ascertaining that the rights had actually been settled.The state government in its order dated January 8 notes (translated from Hindi): “When the administration tries to get diversion of forests done for the Parsa East and Kete Besen open coal block, the villagers, using the context of the land rights given by the collector to them, create barriers and protest to stop work.”The order notes that this was investigated by the forest department. The conservator of forests of Surguja found that the land rights were given to tribals in 2013 while the forest clearance to RVUNL had been given in 2012.

He concluded, therefore, the community forest rights given to the tribals could be cancelled.The district administration along with the tribal affairs and the forest department based on latter’s conclusions passed an order saying, because the land had been given in 2012 to the company for mining, it no longer classified as forestland in 2013 when it was given to tribals under the FRA. Consequently, the three set of authorities collectively decided that the government order handing over rights to tribals in 2013 is cancelled.

The block has been caught up in a legal fracas over the forest clearance for other reasons as well. In 2014, the National Green Tribunal (NGT) had

cancelled the forest clearance noting that the environment ministry had not looked at the impact of coal mining on biodiversity in the region, including presence of protected species such as the elephant. It asked the environment ministry to take a look again at the case. But the stay on operations was removed by the Supreme Court even as the NGT orders to relook at the clearance continued to operate. Since then the ministry has not taken a decision on the matter, records show.http://www.business-standard.com/article/current-affairs/chhattisgarh-govt-cancels-tribal-rights-over-forest-lands-116021601327_1.html#.WoeQn9ypP04.facebook