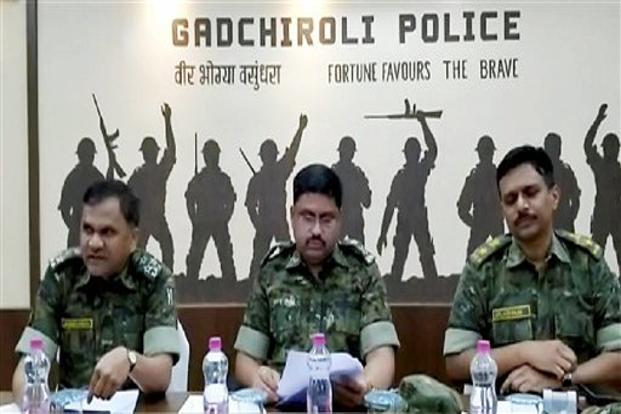 Gadchiroli SP Abhinav Deshmukh and other top officials address a press conference regarding an encounter with Naxals near Bhamragad in Gadchiroli district on 22 April. Photo: PTI

Where is Ganapathy, leader of the people?

A couple of days after news arrived of an ambush led by special forces of Maharashtra Police having decimated two groups of Maoists in Gadchiroli, in the state’s south-eastern arc, on 22-23 April, I received a phone call from a senior journalist in Kolkata. Rumours were about, she mentioned, that the general secretary of the Communist Party of India (Maoist), or CPI (Maoist), whose real name is Muppala Laxmana Rao, was among the nearly 40 rebels killed.

No, I replied. That old fox, nearly 70, ancient for a life of a rebel leader in some of the most daunting jungle battle zones of central and eastern India, wasn’t among the dead. If he had indeed died, the government would have quickly gone to town. It may even have declared the Maoist rebellion dead and distributed the Rs3 crore bounty on Ganapathy.

Surely Maharashtra would have been eager enough: its government had in 2014 declared a Rs1 crore bounty leading to his death or arrest, matching the amount offered by Chhattisgarh (the remainder of the amount including several smaller bounties including one by the National Investigation Agency).

The buzz about Ganapathy being in Gadchiroli was arguably based on another buzz, radiated by many in media quick to report updates from local police or intelligence sources. This interpreted the April victories by Maharashtra Police and the large number of rebel deaths—nearly 40, though a few deaths are now suspected to be collateral damage or faked encounters—as sign of an expanding Maoist movement in Gadchiroli, perhaps even creation of a sanctuary for its leadership.

The fact is that Gadchiroli has, for close to two decades, been an active battle zone, being the western edge of what is known as the Dandakaranya region: Dandakaranya’s heart is in southern Chhattisgarh, and it is flanked to the west, south and east by Maharashtra, Telangana and Odisha. Middle-to senior level Maoist leaders and cadres meet for sit-reps and planning from time to time, and police operatives, now better trained and with better intelligence capabilities and motivation managed to spectacularly jump the Maoists. If Maoists manage a revenge-hit, here or elsewhere, then media narratives will suddenly reverse.

There has also been talk from five years ago that the Maoist leadership was strengthening a corridor that runs from Sukma in southern Chhattisgarh along contiguous districts in Odisha further north to western Jharkhand. This is more supply pipeline than sanctuary.

Security agencies still subscribe to the likelihood that Ganapathy is holed up in the relatively inaccessible Abujmarh area in south-western Chhattisgarh—largely in Narayanpur and Bijapur districts that abut Gadchiroli. Even with inroads by police and paramilitaries, this area continues to be the prime Maoist zone. Ganapathy and a loyal group of cadres are evidently hunkered down here, though not in the relatively luxurious bunkers as depicted last year by the newsmagazine Outlook, which illustrated a three-room suite with design accoutrements that Adolf Hitler may have found comfortable in his last days.

Unless Ganapathy, known to be quite ill, hasn’t taken flight like his older colleague Prashant Bose, or Kishanda, and CPI (Maoist) number two who is rumoured to have adopted a range of guises from mendicant to teacher across Jharkhand and Bihar, then Dandakaranya is where he will likely make his last stand.

The thing is, even if Ganapathy makes his stand against his stated enemies, or against illnesses he battles daily, it won’t be the end of the Maoist rebellion. Even though CPI (Maoist) is vastly reduced and under immense pressure, there is also a succession in play.

Nambala Keshav Rao, who goes by the nom de guerre of Basavraj (or Basava Raju) is 10 years younger than Ganapathy. Basava Raju, the long-time head of the CPI (Maoist)’s central military commission, the umbrella operational command, is seen as successor. Unless a comprehensive peace breaks out, the deadly game of cop-and-Maoist will continue in one form or another as it has these past 50 years.

Sudeep Chakravarti’s books include Clear.Hold.Build: Hard Lessons of Business and Human Rights in India, Red Sun and Highway 39. This column focuses on conflict situations and the convergence of businesses and human rights and runs on Thursdays.