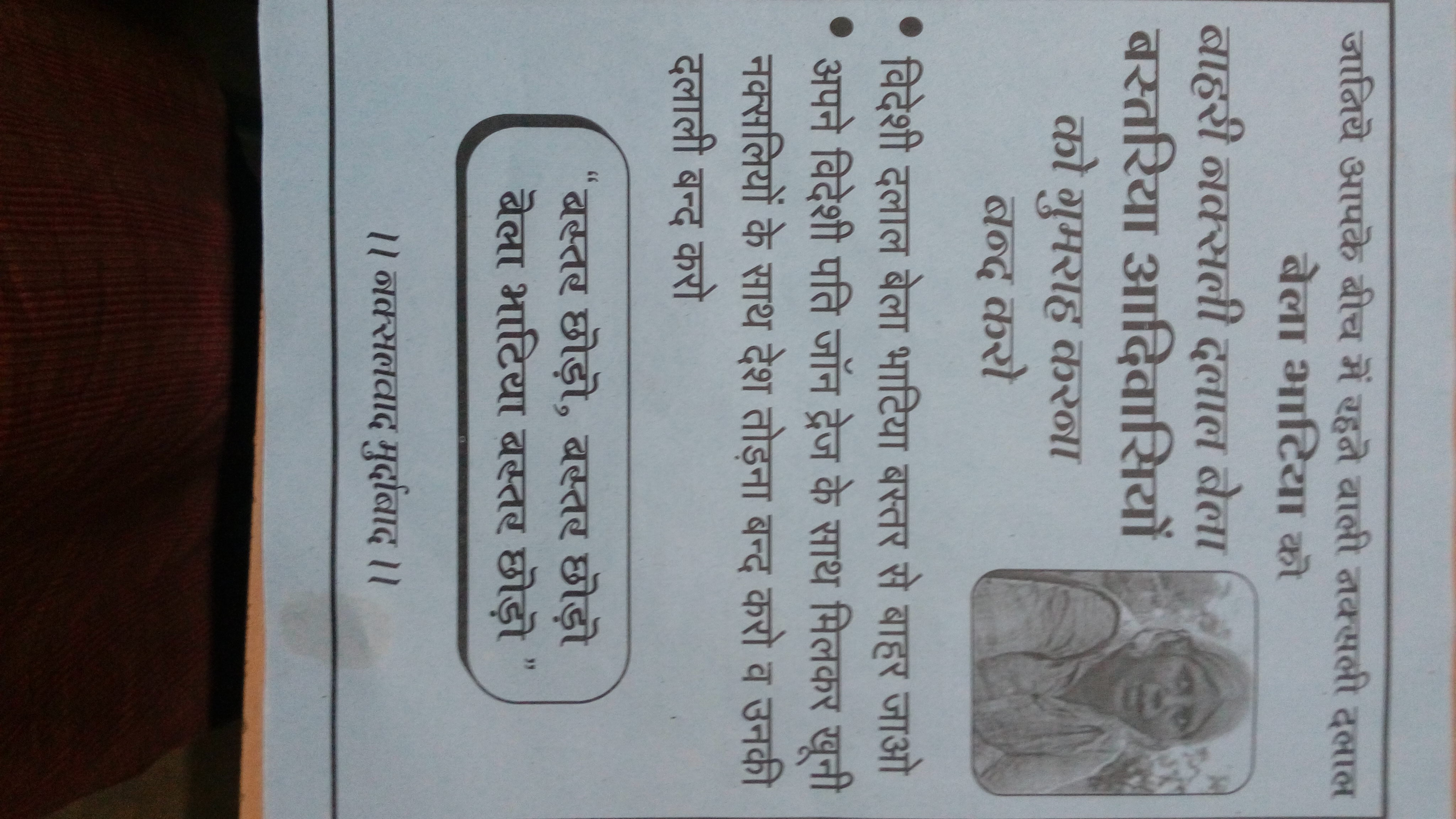 The text of the leaflet is as follows:

BASTAR–Bela Bhatia, an independent researcher, living in Bastar has been working with Soni Sori and Jaglag on documenting and filing cases of human rights violations and people’s livelihoods. She has also been collecting information on the systematic use of violence by armed personnel and security forces. Bela Bhatia has also been threatened and her landlord is constantly been called for ‘police questioning.; It has been alleged that former Salwa Judum members, under the banner of Samajik Ekta Manch and groups such as the Naxal Pedit Sangharsh Samiti have threatened her along with Jaglag and Soni Sori.

When Bela Bhatia was away from her home inbastar yetserday, a gang of 100 people barged in the village and distributed leaflet

According to the villagers ‘At around 4 pm yesterday, a large group of agitated people (perhaps 100 or so) came to the village where I live, 8 km from Jagdalpur, in my absence. They came in four jeeps/cars, five autos and one pick-up. The group included men and women as well as members of the police force who were in plain clothes, a few of whom were armed.’ Villagers recognized some of them who were from a road-side neighbouring village. Around 4-5 were from another hamlet of this village.

The group was carrying a banner. They came to my house. They asked questions about me from the landlady and some neighbours. They asked why a Naxalite “aatankwadi” had been allowed to rent a room there, and advised the landlady to evict me (“unko bhagao”). They were also asking her for information about the landlord, her husband.

Then they took out a rally in the hamlet, shouting slogans against me (including “Bela Bhatia murdabad”) and distributing a leaflet. The leaflet (full text below) accuses me of being a “Naxali dalal” from outside and ends with the slogan “Bastar  chodo, Bastar chodo, Bela Bhatia Bastar chodo”. The leaflet doesn’t bear anyone’s name or any details of any printer. Some of them were also distributing sweets to village children.

Bhatia has faced intimidation on multiple occasions in recent weeks. In February, the police visited her village home and questioned her neighbours, and photographed her landlord. In November 2015 and January 2016, with visiting women activists and Sodi, she helped bring to light two instances of gang rapes and sexual assaults by security forces conducting anti-Maoist operations in remote villages. In January, when she helped some of these women villagers file police complaints in Bijapur, she and Sodi faced mob intimidation and sloganeering by a crowd of men from the Samajik Ekta Manch who accused them of being Naxals, and of not raising issues of human rights abuses by Naxals.

Bhatia has written her doctoral thesis at Cambridge University on the Naxalite movement in Bihar, studied the state-conflict Maoist in Bastar since a decade, and co-authored a thoughtful report for the Planning Commission on the roots of adivasi and dalit alienation in such areas, and how to address them. Her co-authors included the current National Security Advisor Ajit Doval.

More recently, Bhatia wrote detailed accounts of the sexual violence and human rights abuses underway in Bastar. Days ago, in an open letter published in Hindi in the Patrika newspaper in Chhattisgarh, and in English on the Catch News website, she outlined how her decade-long engagement with Bastar had begun, and why she intended to continue with it:

“I had come to Bastar to stay. I will try to remain in the district despite everything that has happened. Democracy is not merely a system of governance. It is also a value system. The consideration for the misery of fellow citizens lies at the root of democracy. It requires an open atmosphere where everybody can live without fear. Democracy aims for a society where there is no oppressor and the oppressed. It means a society where everybody has freedom of speech. I hope we will be able to establish such a democracy in Bastar.”

The Jagdalpur Legal Aid group (Jaglag), currently consisting of lawyers Shalini Gera and Isha Khandelwal were also hounded out of Jagdalpur on the night of February 20, itself an hour before Soni Sori was attacked. Their landlord was picked up and detained in the police station and under threat asked them to vacate their house and office. Jaglag has been providing legal aid to Adivasi prisoners under trial in the Bastar region of Chhattisgarh since 2013.

For the past year and a half, both lawyers were being hounded by the local police. They have been faced with thinly veiled threats at press conferences insinuating that the police are closely monitoring NGOs providing “legal aid to Naxalites“. Their clients have been informed that the police are about to arrest them for Naxalite activities. Visiting journalists and researchers have been told that they are a “Naxalite front. The local Bar Association, clearly prompted by the police, passed a resolution on October 3, 2015 prohibiting them from practicing in the local courts. On their complaint, the State Bar Council of Chhattisgarh passed an interim order allowing them to practice again.

Malini Subramanium, an independent journalist, reporting on issues in Chhattisgarh including the closing down of schools, women and children, as also the brutal violence by security forces against the Adivasis, fake encounters and surrenders in the Bastar. region had to suddenly leave after similar kinds of coercive tactics were employed. The domestic worker in Malini’s house was called and kept in the police station till late at night to terrorize her into implicating the journalist of being Naxalite. Her landlord was similarly threatened by the police into asking her to vacate the house. Malini, fearing for the safety of those who have always stood by her, left Jagdalpur on February 19, 2016.