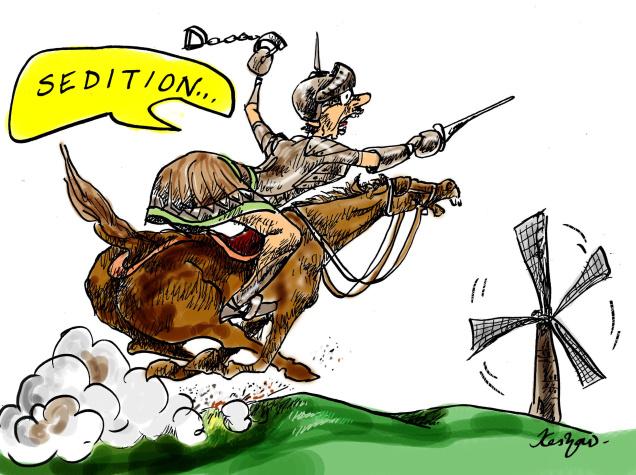 Chhattisgarh police have booked a journalist, under sedition charges for sharing an allegedly inflammatory and defamatory cartoon on judiciary on a social media site.

Kamal Shukla, a senior journalist based in Kanker district of Bastar, was known for his reports on human rights violation of tribals in the Bastar region.

“An FIR has been registered against Kamal Shukla under section 124-A of the Indian Penal Code (IPC). The FIR has been registered on a complaint filed by a Rajasthan resident who objected to Mr. Shukla’s Facebook post. We will now investigate the case before taking any action,” Kanker district Superintendent of Police K.L.Dhruv .

“It was a cartoon onJudiciary and politicians which I had shared after the Supreme Court’s judgment on Judge Loya’s suspicious death. Facebook seems to have deleted it from their side. I am searching for the cartoon and I will share it again. How can the authorities be so intolerant? I just expressed my thoughts on the condition of judiciary today,” said Mr. Shukla who runs a weekly and a web portal named Bhumkal Samachar.

Shukla has been actively involved in the agitations that took place against the alleged victimisation of journalists in Bastar. He also heads an organisation Patrakar Suraksha Kanoon Sanyukt Sangharsh Samiti – which seeks a law to protect journalists in the Maoist-hit region.

The cartoon, which was uploaded on his Facebook wall, pertained to the reports regarding the mysterious death of CBI judge BH Loya, who was presiding over the Sohrabuddin Sheikh encounter case.

Even in March 2017, an FIR was filed against Kamal Shukla and another journalist Prabhat Singh on the charges of defamation, insult to provoke breach of peace, public mischief and disturbing religious harmony for posting and sharing a message on social media and through WhatsApp about interactions of then Bastar IG SRP Kalluri and others.

Shukla, however, has been maintaining that the government and its officers were trying to implicate him in cases after he raised questions about the fake encounters taking place in Maoist-affected Bastar region.