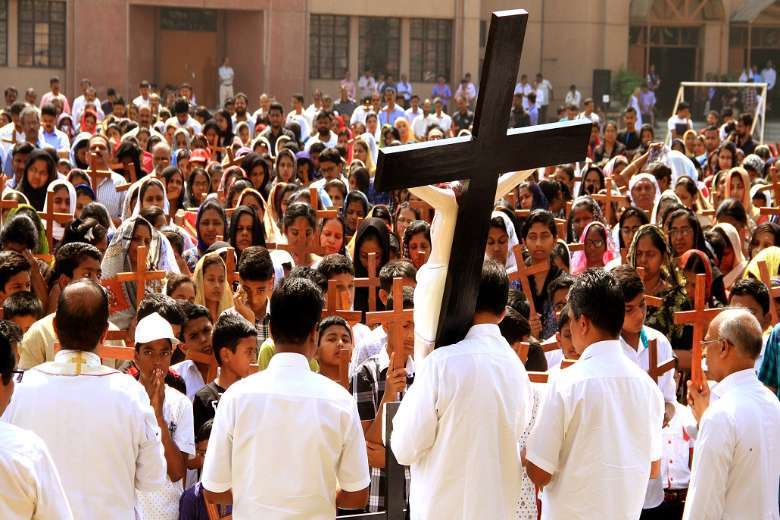 Hindutva hardliners accused the Christians of conversions, when they were praying at a house church in Dantewada districtSabrangindia17 Mar 2021

Eight Christians were injured and hospitalised in Dantewada district of Chhattisgarh, after being attacked by a mob of alleged Hindutva radicals. The Chrisyains had been accused of religious conversion by the mob. According to a UCA News report the attack happened on March 8, when a group of over 150 Christians were praying in a ‘house church’.

A ‘house church’ is gathering when one of the members of the area’s Christian congregation offers to host a prayer meeting inside their homes. It is reported that one such prayer meeting was underway when they were attacked, allegedly by a Hindus fanatic mob that was armed with axes, stones and wooden clubs. According to the news report many of those praying in the house were injured in the attack.

Bishop Joseph Kollamparampil of Jagdalpur told UCA News on March 14, that they had heard of the attack on March 9. According to the Bishop, this Christian group belongs to the Pentecostal church of Dantewada district. “As of now the police have not filed a first information report because most of the time they try to solve the problem amicably,” said the Bishop, adding that this was “a communally sensitive area, so the administration tries to handle the situation carefully and avoid creating any communal tension in the area.”

According to him, there are several reasons Christians are often attacked in that area, he said both the parties have previously been accused of provoking each other., and asked that “both Christians and Hindus should respect each other to avoid the unnecessary situation. There are more than 70 denomination churches in the area and we have no control over them. We have a united Christian forum, a platform where all Christian leaders come and share their views and discuss things, and I hope this will help us clear our differences.”

According to news reports, it was a mob of 30, allegedly led by a local radical leader named Ando Guddi, who attacked the house church on March 8. The mob claimed the Christians were involved in illegal religious conversions in an odd justification of their attack. Many Christians were injured, including eight who sustained serious injuries and required hospitalisation, reported UCAN, adding that the mob also burned a motorbike and several bicycles belonging to the Christians.

The report by the International Christian Concern (ICC), a persecution watchdog quoted a local resident saying, “There is an attempt by the local politicians to divide people on religious lines, and it is not the first such incident reported in this area. The police and the administration do not help the local Christians as they do not even file a first information report.” Chhattisgarh’s Hindus make up 98.3 percent of its 23 million population, Muslims account for 1 percent, while Christians, mostly tribal people, account for 0.7 percent.

According to Pastor Samson Bhagel, who was among the injured, said that the Christian community has been living in fear and insecurity in the area. It has been reported before how vigilante Hindutva groups often accuse Christians of carrying out religious conversions. Vigilantes then use various intimidating tactics and force those they can intimidate into participating in “reconversion” to Hinduism ceremonies. Anti conversion laws, under various titles, and carrying varied punishments, are in place in: Uttar Pradesh, Uttarakhand, Arunachal Pradesh, Odisha, Madhya Pradesh, Chhattisgarh, Gujarat, Himachal Pradesh, Jharkhand and Tamil Nadu. Many are referred to as ‘anti love jihad laws’, that are aimed at making conversion for marriage into another faith a punishable offence. In January this year, the Allahabad High Court dismissed a petition seeking direction to the Centre to consider passing a law regulating religious conversion, like the one passed by Uttar Pradesh.