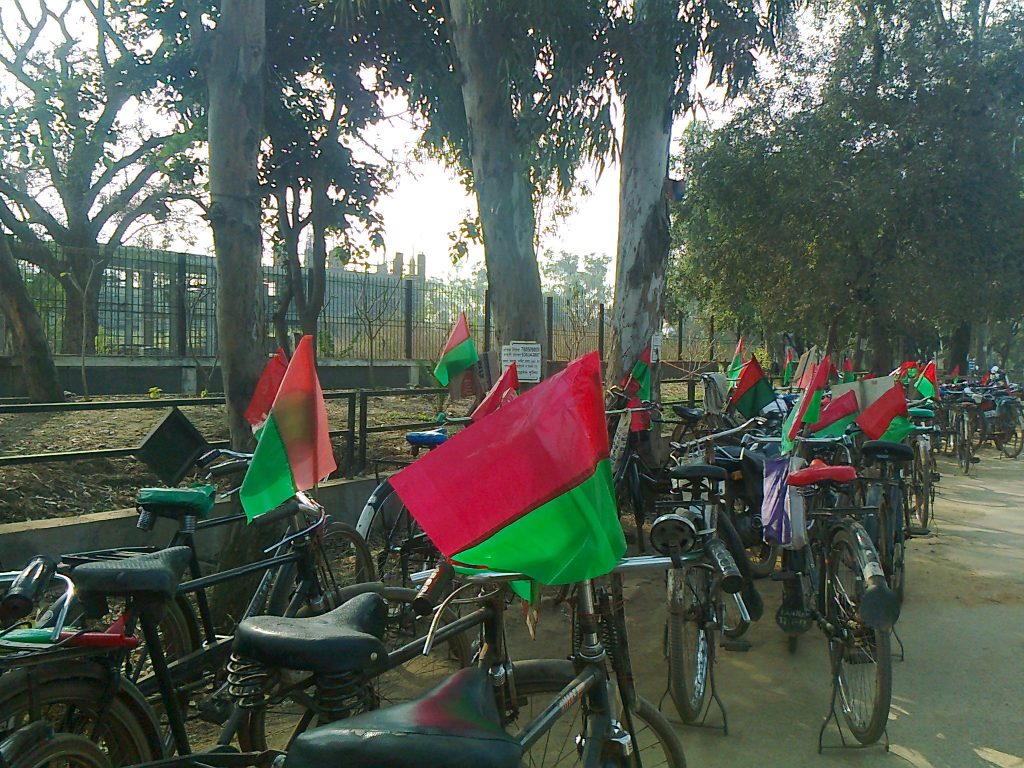 A significant share of popular sentiment is anti-activism today. Many people hardly trust activists. In fact they loath them, abuse them on social media and often make fun of their tragedy by sharing jokes around. Not just activists, movements for justice are mocked at and believed to be undesirable. The ruling establishment not only cashes in on such sentiment but also perpetuates it by criminalizing different activists. A population, engrossed in unlimited desire and overwhelmed by populist electoral promises, forget that the rights they enjoy are products of some peoples’ life-long struggle. Here, my focus is on the movement Chhattisgarh Mukti Morcha- Mazdoor Karyakarta Samiti (CMM-MKS), which Sudha Bharadwaj has been associated with. In the context of the state hounding her, the judiciary denying her bail and putting her behind the bars, I am sharing some experience from my fieldwork for research.

CMM-MKS is an offshoot of Chhattisgarh Mukti Morcha (CMM) led by the legendary trade unionist late Shankar Guha Niyogi. CMM arose out of a trade-union movement named Chhattisgarh Mines Shramik Sangh that began at Dalli Rajhara in the undivided province of Madhya Pradesh, India in 1977. It was a resistance against both the management and the existing union Sayunkt Khadan Mazdoor Sangh that didn’t take up contract labourers’ issues because of CPI’s (Communist Party India) support for the Emergency. Niyogi’s approach was unconventional. It raised not only issues of wages but also worked for abolition of contract labour and struggled against departmentalization of workforce as well as mechanization. He took worker’s struggle beyond the workplace to their neighborhood and villages by focusing on different socio-political issues- like women’s participation, alcoholism, health, and education of workers’ children and so on. It was a holistic approach with a unique conceptualization of working class situation beyond economism. He believed that the success of the struggle depended on the survival of the workers. Hence, the struggle was often accompanied by construction of alternatives. The movement established a hospital, a garage and several schools etc. The ideology of sangharsh aur nirman (struggle and construct) contributed to its stability and spread.

Niyogi was condemned to be a Naxalite and later assassinated on September 28, 1991.

In the aftermath of Niyogi’s death, the movement travelled its own path- from mass protest to prolonged struggle in court, gradual sanitization of its political potential, and finally the crisis. Varieties of conflict led to its fragmentation into different groups at Dalli, Raipur and Bhilai in Chhattisgarh (a province separated from Madhya Pradesh). Sudha Bharadwaj has continued her activism with the Bhilai group. Their effort was to go beyond the crisis and rebuild the movement. The organization has been remodeled by replacing traditional form of hierarchical leadership with ‘committee system’. They call their struggle as jan-adharit (people-based) instead of neta-adharit (leader-based). Its emphasis is on samuhik netrutwa aur byaktigat jimmedari (collective leadership and individual responsibility), so that the movement won’t die out of leadership crisis and corrupt leadership can be dealt with. At the same time, the gap between a leader and led can be reduced by involvement of masses in decision making. The idea is to convert a movement for masses into a movement of masses.

The movement has local committees, regional committees, regional leading committees and a leading committee. Apart from this, a monthly meeting of all the regional and leading committee members is arranged to reflect on different engagements. It works as the parliament of the movement where activities are reported, assessed and future plans are set. Unlike Niyogi’s time, now minutes of each meeting are written, revised and re-discussed each time. In the whole process virtues like anushasan (discipline) and alochana aur atmalochana (criticism and self-criticism) are emphasised. However, all the committee members belong to working class. Every morning, in the office they read news-papers and if they come across any news of resistance at some places they cut that portion of the paper and keep separately. Information may also come from different sources. Then, some of the regional committee members visit the place, meet the people there and write a report after coming back. After discussion in the leading committee meetings, they make future plan. It’s attempted to develop a rapport and confidence among the people through continuous visits, and then they form a local committee. This is where it begins. Such innovation has snowballed the movement into different districts of Chhattisgarh, such as Durg, Raipur, Baloda Bazar, Raigarh, Dhamtari and others. It also works with other movements through different cluster organizations like CBA (Chhattisgarh Bachao Andolan).

Bhilai group rightly calls itself CMM-Mazdoor Karyakarta Samiti as the committee members are none other than the workers themselves. Following Niyogi, it has also diversified itself into trade unions in cement, engineering and sleeper plants, anti-liquor campaigns, mobilization of women through Mahila Mukti Morcha, agricultural farmers’ resistance, establishment of housing settlements and schools in Raipur, different cultural activities as well as struggle against corporate-land grab and displacement and so on. Engagement in many fronts comes from a formulation that capitalism creates multiple layers of suffering, for instance, alcoholism and wife battering are effects of repressed masculinity at the workplace. A worker’s everyday life is seen together with the workplace. There is an understanding of simultaneity of contradictions with a specific emphasis on context.

Apart from bringing different causes together, the movement has prioritized movement participation of masses in a radical sense by their presence at every sphere of decision making. It emphasizes on training the workers to take up responsibilities. Responsibilities include both their life-world and resistance. Masses must learn to raise questions by asserting their many subjectivities (class, caste and gender etc.). They come up with creative ways for such training. One such effort is dividing the rank & file into many small groups or committees for ideological discussion or baicharik charcha. It functions like study circles, where they discuss about early days of the movement, Niyogi, Marxism, developmental issues and so on. They put it in three words, that is, lakshya (goal), disha (path given by Niyogi) and karyakram (programme). Very proudly, they call the movement their pathshala and reaffirm their motive in slogans such as pehele manke challis, ab janke chalbo (they will realize and move instead of only following their leaders). Such activities enable mutual engagement of people from different levels contributing towards critical reflection on issues around them.

It’s so fascinating to see workers discussing their neighborhood to workplace issues in a meeting after a day-long labour in the mines or nearby plants. It’s even refreshing to see women mobilizing themselves and confronting their alcoholic partners or a sexist colleague as well as engaging with the state representatives (officials, police, and lawmakers etc.). I have come across people who have given up liquor and reorganized their lives. Association with the movement has re-established hope when they were in distress. People in the housing settlements take pride in such association and dream to make it a peacefully livable community by fighting discriminations and other maladies.

Politics, here, is neither electoral nor of an unorganized ‘multitude’, nor of any revolutionary violence. It’s more of an organized process of conscientisation to develop critical awareness. Committee members’ prolonged engagements with people are reflective of that. Again, the libertarian antipathy to traditional forms of leadership is meant for a bottom-up approach to consciousness building and struggle, and thereby transformation. The values, envisioned, are attempted to be practiced. Thus, democracy is not violated but resurrected through a complex intersectional understanding of the working class situation.

There are many disagreements and confrontations- Satnamis confront Sahus (caste groups), women confront men, new generation confronts the old, and they all confront the capital and the state. It makes the movement lively and its politics radical, but violence has never been encouraged. I remember an incident from a rally at Baloda Bazar, where a group started a slogan juta maro salonko (hit them with shoes). Sudha Didi (called so by everyone) as a leading committee member vehemently opposed it, and it was stopped.

One can debate and dispute with the entire matrix of formulations, activities and experiments happening there. And, that constitutes the history of politics. But, narratives of violence attempt to create setbacks for peoples’ struggle by creating a legitimacy crisis. Such efforts fail. Today, even the kids from the workers’ families shout slogans identifying themselves with Didi, the way some others did when Niyogi was condemned. The very slogan they give is Sudha Didi Naxali hai to hum bhi Naxali hain (if Sudha Didi is a Naxalite, we are also Naxalites). Because they have lived with her in the same labour camp, seen her engaging affectionately with Anu (her daughter) and other kids, patiently having discussions in meetings, delivering fiery speeches at mass gatherings, arguing for justice in the courtroom  and spending sleepless nights with the case files of deprived (mostly pro bono). Given her attachment with the masses, conscious effort for their empowerment and dedication for a better society, it’s difficult to digest the allegation of violence brought against her.