Chhattisgarh – New Bastariya Battalion , Is the Salwa Judum back? 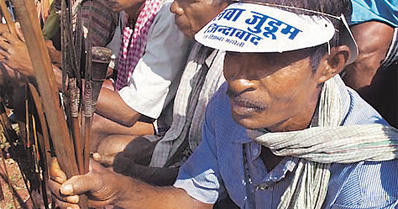 Chhattisgarh’s new Bastariya Battalion evokes memories of disbanded force, and of concerns associated with it. Women commandos of the CRPF’s Bastariya Battalion during a drill at their training centre in Ambikapur town of Chhattisgarh this week. (Source: PTI)

Chhattisgarh’s new Bastariya Battalion evokes memories of disbanded force, and of concerns associated with it. But CRPF says these personnel have been trained far better, will give the force a clear human edge

What is the Bastariya Battalion?

On Monday, Union Home Minister Rajnath Singh and Chhattisgarh Chief Minister Raman Singh attended the passing-out parade of a newly formed battalion of the CRPF, the Bastariya Warriors, at the Anti- Naxal Training School in Ambikapur. The battalion, numbered 241, is unique: all the 549 recruits come exclusively from four districts in Bastar, and several relaxations in physical attributes were granted to them during the recruitment process. Following the completion of the 44-week training programme, the battalion is expected to be deployed soon. According to the CRPF, the battalion will be immensely helpful in operations, as its recruits are familiar with the local terrain and language. It will also help bridge the disconnect between the CRPF, which comprises personnel from all over the country, and the local population.

So why are concerns are being expressed about the new force?

Essentially because it revives memories of the Salwa Judum, the now disbanded militia force.

What was the Salwa Judum? Why is its story integral to the Bastar narrative?

Salwa Judum was mobilised in 2005 by the late Congress leader Mahendra Karma, who was assassinated by Naxals in 2013, and deployed in parts of Chhattisgarh. Those in favour of the idea claim that the Judum was a “spontaneous uprising” of tribal people against Maoist violence in Bastar, and helped in countering Naxals in the region. Yet, by the time the force was banned by the Supreme Court in 2011, it had acquired a bloody and controversial reputation. The state government allegedly supplied arms and tacit support to the Judum, which had turned into a vigilante group, recruiting poorly trained youth as “Koya Commandos”, or “SPOs (Special Police Officers)”. Many of the volunteers were former Maoists. Many people were killed, there were numerous allegations of the Judum entering and burning villages, several accusations of sexual assault, and of thousands being displaced from their homes. For the trapped villagers in Bastar’s forests, there were only two options: either stay put and be declared a Maoist, or move to Salwa Judum camps set up by the state. Thousands left their homes never to return. These camps still dot Bastar, with settlements in neighbouring Andhra Pradesh and Telangana as well, and many are still too afraid to return to their villages for fear of Maoist reprisals.

And how similar is the Bastariya Battalion to the Salwa Judum?

Activists argue that like the Judum, the Bastariya Battalion seeks to pit tribals against tribals and could again cleave tribal society. They say recruitment could again force that choice between life and death, so prevalent during the Judum days, as tribals are inevitably trapped between two hostile forces. If a villager was to join the Battalion, activists say, their families would be threatened by Maoists. Senior CRPF officials told The Indian Express that members of the families of two new recruits had been killed over the past year, with several others had been told to ensure that their children return, or face a boycott. This situation, activists fear, will be exacerbated by the fact that the Bastariya Battalion will be used exclusively for operations in Bastar.

“This experiment has been tried before and has failed at a terrible cost. Why is the government returning to something that created such a deep and painful divide, and was not successful at all?” Isha Khandelwal of the Jagdalpur Legal Aid Group said. Activists also argue that the period during and after the Judum saw a sharper-than-usual increase in Maoist recruitments, and in villagers seeking security from government-sponsored vigilante groups.

Human rights workers point out that there have been problems with the District Reserve Group (DRG), a similar unit of Chhattisgarh Police, that has former Maoists in its ranks. They allege that the Judum was never really disbanded, its SPOs were made auxiliary armed constables, and eventually brought in to the DRG. While Chhattisgarh Police claims that the DRG has been an unqualified success, with local expertise sharpening operations and intelligence, activists point to several cases in which villagers have accused the DRG of human rights violations.

What is the government’s argument for raising the battalion?

The government argues that the battalion will give the security forces an operational dimension, for which the CRPF has been completely dependent on the state police. The knowledge of the terrain and language, and ability to spend long hours in the forest, will be of immense help to the CRPF. Yet, the major difference between the Judum and Battalion 241, CRPF officials say, is in the “training”. A senior officer said, “We cannot shy away from the fact that there is a conflict. But these men are not poorly trained… They filled up forms… and have been given a 44-week training, which included not just modules on jungle warfare and weapons training, but also civic responsibilities and human rights. They are CRPF constables like any other, and not a vigilante group. Every single one of them filled forms to apply for this. Can we say we shouldn’t give the chance to tribals from Bastar to be employed by the CRPF of their own volition? After they do, the target for every force has to be efficiency within the confines of the constitution. And posting them here is a step towards that.”

Officials also argue that the presence of locals will increase the sensitivity of the CRPF, especially with one-third of the recruits being women. “Because of the language problem, and a complete disconnect with the local culture among personnel who come from thousands of kilometres away, we do often have a problem of understanding. Their (locals’) presence makes us much more sensitive. The women in our force help towards that end, and also increase our ability to counter fake allegations that come our way. In fact, if you look at the last few years, the CRPF gets stuck with allegations of human rights violations as part of the “forces”, when the accusations are often against other units like the DRG. We are a disciplined force, and the Bastariya Battalion will be the same. We have taken special care in our training process,” a senior officer said.

The Bastariya Battalion will be deployed in Bastar in a little over a month, after a period of leave, and pre-induction training in the sectors they will be active in. The scars that the Salwa Judum left behind in Bastar are deep, its wounds have still not completely healed. CRPF officers say that the first six months will be crucial to the success of the new battalion. Yet, the success or failure of the Bastariya Warriors in Chhattisgarh will be judged not only by their “operational successes”, but also by their human rights record. They will be under constant scrutiny of civil society, the press and, most importantly, the adivasis who live in the forests in Bastar’s conflict zone.