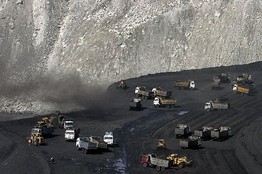 Reuters,Miners worked at a coal mine in Chhattisgarh, November 21, 2009.

Chhattisgarh –  one of India’s three largest mineral-producing states – has had enough of industries like mining, power, metals and cement.

The local government says it doesn’t want any more such projects, although the state has long relied on these industries for growth.

Instead, Chhattisgarh is keen on reinventing itself as a hub for making auto-parts, processed food, electronics and software, says Raman Singh, the state’s chief minister.  ”I have been telling investors in one-to-one meetings … that we are not interested in new projects in the core sectors,” Mr. Singh told the Wall Street Journal. Over the weekend, Mr. Singh hosted a two-day investors’ meet aimed at persuading companies, mostly domestic, to invest as much as $22 billion in the state.

The “core sector” is shorthand for mining, metals, cement and power generation businesses. The state’s large reserves of bauxite, coal and iron ore have attracted significant investment from state-run and private companies, including Coal India Ltd. 533278.BY +0.54% Vedanta Resources VED.LN -3.28% and Jindal Steel & Power Ltd. 532286.BY -2.04%

“A power project takes 10,000 crore rupees ($2 billion) to build but employs 700 people, while an IT company would invest just 10 crore rupees and employ 600. We want to bring in industries that create jobs,” said Mr. Singh, a senior politician with the Bharatiya Janata Party, the main opposition to the Congress-led central government.

Unemployment is a major problem in Chhattisgarh, a state that, despite its mineral wealth, is one of India’s poorest.

Endemic poverty is one of the reasons many locals support left-wing rebels, known as Maoists, who operate in the state and inhabit its densely forested areas. Chhattisgarh is a hotbed of rebels who claim they are upholding the land rights of local tribes and rural poor against the government and industrial interests.

Maoist rebels have opposed industrial and mining projects, which typically require large swathes of land, making it difficult for companies located in areas with strong Maoist presence to operate. Apart from Maoists, local villagers and tribals have also become increasingly vocal opponents of mining and power projects in mineral-rich states like Chhattisgarh. 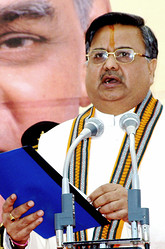 As a result, Mr. Singh says that for the state to guarantee land and water to large mining or power projects “is not that easy.”

“Water and land are limited. How many projects can the state support?” said Mr. Singh. “The government has enough land for industries that don’t require much land, be it agriculture-based companies, auto or technology companies, so we are encouraging such investments,” he added.

Mr. Singh said that while the Maoist insurgency remains a problem, the government has been able to contain it. “The problem is being fought on two fronts. We are educating children in tribal villages so they don’t pick up guns later in life, but when insurgents kill people, the police can’t just stand and watch. So we fight back too.”

The inside of Mr. Singh’s modest bungalow in Raipur, the capital of Chhattisgarh, is crowded with security. Cameras and cell phones are not allowed inside the premises, which are patrolled by officials armed with walkie talkies.

It’s unclear how successful Chhattisgarh’s investment pitch will be. While Indian states like Maharashtra, Tamil Nadu, Karnataka, Gujarat and the Delhi have seen a steady flow of investment in recent years, security issues mean that states like Chhattisgarh are a tougher sell. Large Indian and global companies in technology and automobiles sectors stayed away from the investors’ meet over the weekend.

There is scope for investment in other sectors, like agriculture. Investors said that the state’s large production of fruits and vegetables is likely to be attractive for companies looking to make juices and other processed foods.

But can this really replace industries like mining in the state’s economy?