Chhattisgarh- What will Bastar’s children reap from this bloody war of binaries? 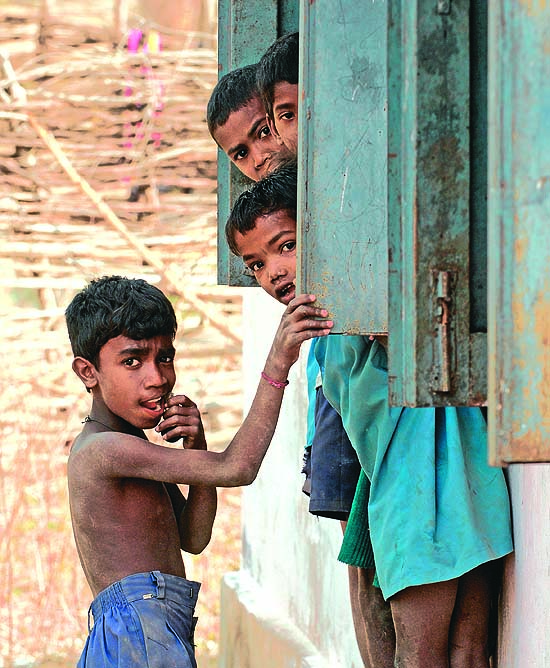 SANJAY RAWAT
No kind conflict Tribal kids have no escape from the red war
GROUND ZERO
An Ill Sowing Festival
What will Bastar’s children reap from this bloody war of binaries?
SUPRIYA SHARMA, in Outlook

A few hundred metres short of where the Maoists would launch an attack that would propel them as far as the pages of the New York Times, a young adivasi boy, not more than ten years old, stood in the dull afternoon heat, facing perhaps the biggest dilemma of his life. He knew what lay ahead on the road. He possibly struggled with the burden of what to do about it for a couple of moments before he flagged down a motorcyclist. “All he said was ‘aage kuch hai’,” recounts Om Prakash Singh, a 42-year-old businessman and Congress party worker who was racing ahead of a convoy of party leaders on his motorcycle when he noticed the boy and slowed down to hear him out.

Singh ignored the boy’s words of caution. A few minutes later, he heard an explosion ring through Darbha Ghat. While Singh had safely crossed the bend where 30 kg of ammonium nitrate laid buried, the convoy of about 25 cars had not. An explosion heaved the road. What followed was a bloodbath its survivors are not likely to forget.

But what about that boy? He would remain unknown and unheard. And it is best that way. For he had violated the rule of self-preservation that Bastar’s adivasis drill into their young as early as they learn to speak: see everything, but stay mum.

Last year, when I returned to Chhattisgarh after a break of eight months, I was told things were looking up in Bastar. The official figure of lives lost in the Maoist insurgency had plunged to 107—the lowest in eight years. The state had lost the top spot in the casualty table to Jharkhand. Beyond the statistics, I looked around for signs of change. A construction boom was under way in the district headquarters. Bijapur had a swimming pool. Dantewada had a new cricket ground with grass as green as the lawns in Lutyen’s Delhi. People in the towns were breathing easy. Even the villages seemed somewhat better off. At least the ones along the highways.

Then I ventured off the roads and spent a few days inside the large expanse of forests where adivasis live to the sun, the seasons and the rules of the Janatana Sarkar. Here, in the second week of March, the news that an encounter had taken place in Kanchal, a village deep south, just 25 km short of Andhra Pradesh, floated to the village where I was staying. Fear had travelled like radiation, distorting the face of a young boy—let’s call him Joga—who had made plans that morning to take his cows down to sell at a border market. Now, it was no longer wise to go, he surmised. The security forces could still be around. He could be caught, beaten, taken away. At 16, Joga had internalised the twisted logic of the conflict: You may have to pay for what you have not done.

The Greyhounds, Andhra’s elite anti-Naxal force, had stormed Kanchal in the early hours of morning. They had wanted to bust a group of Maoists camping near the river. The Maoists escaped. But a village woman, Kunjam Deve, who was filling a vessel of water, fell to the bullets. Three days after her death, I found Deve’s daughter Bhime, aged 17, standing by the river bed, crying her heart out.

The summer grew blistering inside the Maoist territory. On April 16, the Greyhounds came further inside Chhattisgarh and killed nine Maoists, including a senior leader, in Puvarti village. A month later, on the night of May 17, in Edesmetta village, men, women and children gathered to cajole the village spirits to send new life their way—the village was celebrating Beeja Pandum, the seed festival marking the beginning of the sowing season—but instead, CRPF jawans turned up to deliver death. Eight villagers died in firing by the CRPF. Three were children.

Regardless of who was killed, the pertinent fact, from the point of view of the Maoists, was that the security forces were frequently entering their terrain, carrying out attacks and outrages, and going away unchallenged and unharmed. “Hatyare sarkari shastra balon par jawabi hamla kar shaheedon ka khoon ka badla lenge (We will avenge the death of our martyrs at the hands of the murderous government security forces),” said the Maoists’ note on the Puvarti encounter. At the bottom of the page, printed in fine red, were thumbnail pictures of the Maoist guerrillas who had perished. How long before a publication rolls off the Maoist press featuring dead government soldiers, I thought. 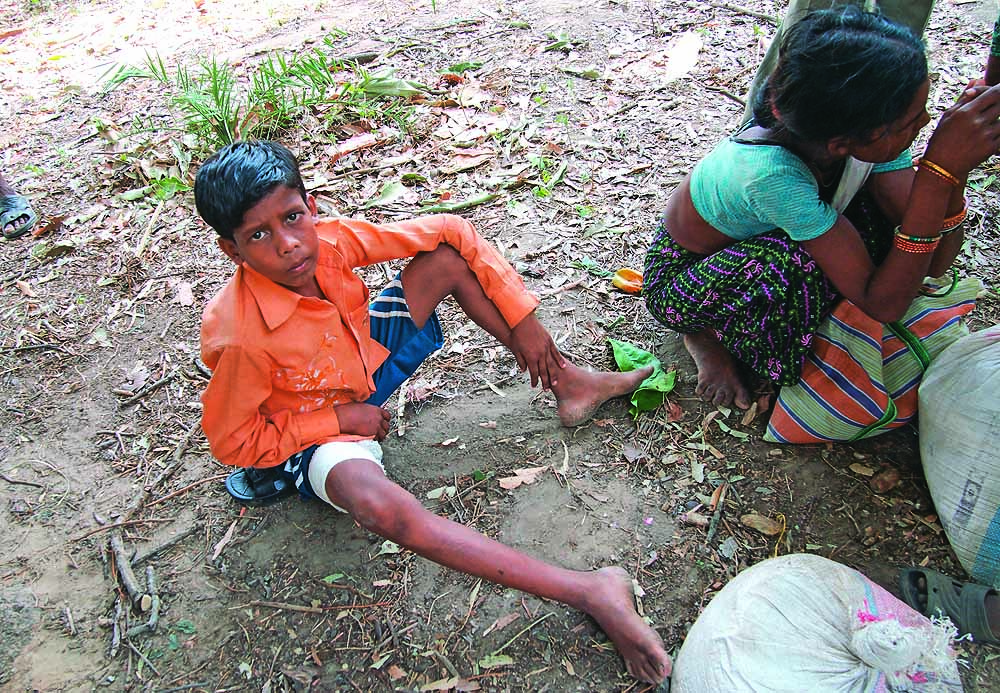 With the clarity of hindsight, one can argue it is not surprising that the bloodied bodies of Mahendra Karma and Nand Kumar Patel and not dead soldiers would become the face of a Maoist victory pamphlet. Since the humiliating losses of 2010, inflicted by the Maoists in a mine attack and ambush, the CRPF has come a long way. It is better equipped and trained. It has more camps and boots on the ground. For the Maoists, under pressure to deliver a victory, it was easier to blow up a political convoy than ambush a security patrol. Except, by doing so, they have ensured that when children living in their area are gunned down by the CRPF, no one would care.

Three days before he found himself crouching in a ditch, ducking the spray of bullets coming from the automatic weapons of young adivasi guerrillas, Congress MLA Kavasi Lakhma had climbed a hill to reach Edesmetta, to condemn the killing of the three children and five others and to ask for the CRPF soldiers to be punished. A year ago, Lakhma had his party boss Nand Kumar Patel by his side when they made a similar demand in Sarkeguda, the village where the CRPF troops had shot dead 17 people, including children.

Tasked with breathing life into a comatose Congress when he took over as the state chief in 2011, the mild-mannered Patel had first shown mettle when he had taken on the state government in March that year over a police rampage in Dantewada. The police had burnt homes and granaries in three villages—not for the first time. But for the first time perhaps, the state Congress raised a ruckus. Patel led a delegation to the villages, held up the state assembly for days, and kept the story alive in Chhattisgarh’s newspapers, otherwise not keen to report police violence. The Congress’s repeated attacks ensured that this year, with elections coming up, the Raman Singh government took no chances and swiftly ann­ounced Rs 5 lakh in compensation for the Edesmetta victims. But with dead bodies of Congressmen landing up in faraway districts, there is no opposition left for a future protest.

In the Times of India office in Raipur where I worked, I was the sole journalist. The rest of my office colleagues were young men and women employed in the paper’s marketing department. Some of them were freshly out of college. Born and raised in the city, they had travelled to Delhi, Mumbai, Calcutta, Vishakapatnam, but not to Bastar. They sourced bright ads of Bastar tourism but saw it as an area of darkness. It filled them with vague fears. Those fears have intensified this week. The landmine explosion has opened up a bigger chasm between the youth of Raipur and the youth of Bastar.

And yet, never before has the gap been narrower. For the first time, a generation of adivasi children, living and studying in ashramshalas, the residential schools run by the government, is being raised on more than just stale textbook narratives. Along with mid-day meals, satellite TV has been made compulsory in school. Already, the adivasi children and youth have taken to cricket with a vengeance. Young men shop for jeans and sneakers and crave for mobiles and motorcycles. They still love to lock their arms and sway while singing Gondi songs lustily. But at a school annual day I attended in January, they reserved their greatest enthusiasm for the ‘taara rara’ of Daler Mehndi.

Urban radicals may believe revolutionary fire cannot be doused by stoking material aspiration through a culture of consumption. But the Maoists are more pragmatic. The party does not want electricity in its villages, because with electricity would come TV, and by watching TV “logon ka dimaag gol gol ghoom jayega”, as a Maoist commander told me. It is not surprising then that in the football tournament it organised in February, the CRPF gave out solar-powered TV sets with satellite dishes even to teams that lost.

The state’s push to woo the young is unmistakable. It did not begin as coherent policy but as the drive of a young collector who “wanted to do something big”. When he arrived in Dantewada in 2011 at the age of 29, O.P. Choudhary wasted no time in drawing up an ambitious plan to spend Rs 100 crore on building an education city with schools, hostels and polytechnics. While the campus came up, he built a library, a plush auditorium, a cricket ground in the district headquarters. It was no less than a blitzkrieg. Every week, buses brought children from the village ashramshalas to watch movies and play games. And those who had dropped out of school began showing up at a newly created livelihood college to train the in industrial stitching, plumbing, welding, computers, hospitality. When I visited the college in January, a young boy exp­ertly folded a table napkin five times and gingerly stuck it in a glass, looking pleased with his newfound skill.

But the state cannot create opportunities for all, and even if it could, not everybody would want to take them. Many children who come to study in the state’s ashramshalas eventually want to go back to their villages in the Maoist territory. Their life is inextricably linked to family and community. And after three decades, the rebels are part of the clan. Not many young people would easily break rank. Not for an outside world that has much to offer but not respect.

Two days after the attack, when the clamour for sending new troops to Bastar reached a feverish pitch in TV studios, the CRPF quietly began its long-planned rally to hire adivasi youth. Some 2,000 constables were to be recruited, 280 from each district of Bastar. But over three days, only 46 turned up in Sukma; Dantewada fared better with 233, but only half of them were adivasi. Some would argue it was because of the Maoist attack. But I wondered if it would have been any different at any other time. Between state and rebel, Bastar’s youth have no simple choice; it’s complicated by everything that complicates the lives of young people elsewhere—family, love, ambition, personality. But the choice they don’t seem to have—not now, not unless they leave Bastar—is between war and peace.

In his ten years, the boy who stood on the highway has lived through the bloodiest years of Bastar. It seems unlikely peace would come his way before adulthood.

(Former NDTV reporter Supriya Sharma reported for the Times of India from Chhattisgarh for two years.)