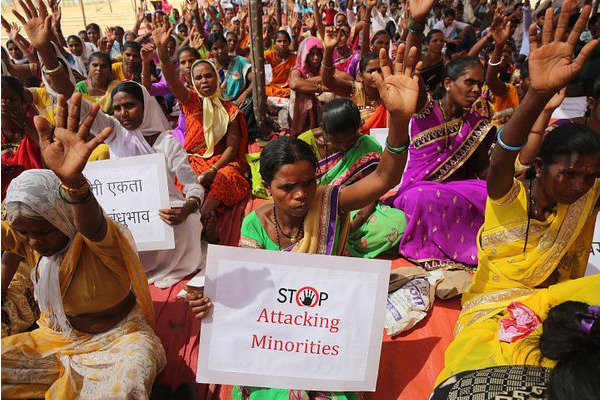 As sectarian nationalism is becoming more assertive and strong, the religious minorities are being subjected to intimidation and violence on regular basis. As such there is an increase the frequency of this phenomenon during last decade in an alarming way. The anti-Muslim violence is noticed and partly reported but the anti-Christian violence, for various reasons is not brought to fore as such. One reason is; it is scattered, low intensity below the radar violence so it does not make headlines as such. This is the conclusion of a citizens fact fining report, which went into investigate various incidents of anti-Christian violence in recent times. The report laments, “Human rights groups which monitor atrocities against Christians in India, have been recording regularly the cases of violence against Christians by Hindutva groups from all states. But they have largely been unnoticed in the media or even in the human right circles.”

This report chronicles the violent acts against Christians in various districts of UP, and investigates the attack on Roorkee Church, October 2020. In this violence it observes that though the police was given prior information, it did not take preventive steps and when the attack began, it arrived too late, once the attackers had left. The aim of the attack seems to be to build a narrative that Christian groups are doing conversion work.

On similar lines the other incidents which the report has compiled from different sources (Sabrang.india, UCF, EFIRLC). Some of these are Mau, 10th October 2021, Indore 26th January 2021, Shahjahanpur 3rd January 2021, Kanpur 27th January 2021, Bareilly 16th Feb 2021, Ambedkar Nagar 21st February, Prayagraj 25th February, Kanpur 3rd march 2021, Agra 14th March, Kerala 22nd March, Maharajganj 19th April, Bijnor 23 June 2021, Gonda 25th June, Azamgarh 25th June, Rampur 26th June, Raibairly 28th June, Shahjahanpur 29th June, Aurayia 29th June, Jaunpur 3rd July, Hoshangabad 3rd October, Mahasamund 3rd October, and Bhilai 3rd October. This compilation shows that more such incidents are taking place in different places in UP, while there are some from Haryana, Madhya Pradesh, Chattisgarh and one from Kerala. In most of the cases it is prayer meetings which are targeted and these are labeled as attempts at conversion. The assertion of VHP-Bajrang Dal in these matters is so intense that in Satna, the members of this group demanded on 25th October that the idol of Goddess Sarswati should be installed in the school run by Catholics.

In tune with the rising majoritarianism the religious minorities are projected in adverse ways and Christians in particular are accused of conversion through force, fraud and allurement. A large section of Christians do feel intimidated. It is this trend which made Julio Reibero, the ex police officer who served the nation with distinction, state that “As a Christian suddenly I feel stranger in my own country”. Since the time he stated it way back in 2015, things are worsening at rapid pace.

Persecution Relief, a group monitoring and anti Christian violence in India states in 2020 “The watchdog group recorded 293 incidents of anti-Christian persecution in the first six months of the year. Six of those cases resulted in murder. Two women were raped and killed for their faith, and another two women and a 10-year-old girl were raped for refusing to renounce Christianity. Uttar Pradesh “remained the most hostile state against Christians in India,” noted the report. Sixty-three hate crimes were reported there.”

According to its founder Shibu Thomas, these are just what they have records of; there may be many more cases that have gone unreported. Open Doors, another organization working with local Churches points out, “Christians are persecuted in all areas of public and private life, and anti-conversion laws (currently in nine states, with more considering adoption) are abused to harass and intimidate Christians. Few people are actually convicted under these laws, but cases can drag on for years.” India figures in their list of 10 most dangerous places for Christians to live.

As Karnatka Government is planning to introduce ‘anti conversion laws’, it has already set up massive intelligence gathering exercise on the Churches and the Christian Congregations. At a rally in Sarguja district of Chatisgarh (1st October 20210 Swami Paramatmanand called for targeted killings of minorities involved in conversion work. This he stated in presence of leaders of BJP.

While the propaganda is made through various channels about missionary work of conversions, the population census tells a different tale. As per the census figures Indian Christian population was as follows: in 1971-2.60%, 1981-2.44%, 1991-2.34%, 2001-2.30% and in 2011 census 2.30%. It is projected as a foreign religion but it is very old Indian religion, its advent in India being marked with the coming of St. Thomas in AD 52 at Malabar Coast. The Christian missionaries, while some of them overtly claim their aim of converting the people, have been working in the arena of health care and education in the remote areas or among the poor dalit communities. The educational institutes set up by them are known for their quality education. There is a heavy competition for entrance in to these institutions.

The anti-Christian tirade picked up in the decade of 1970s when the VHP and Vanavasi Kalyan Ashram extended their work in Adivasi areas. In Dangs in Gujarat: April-August, 1998 witnessed violence. Here Swami Aseemanand, who was accused of being part of various bomb blasts set up the Shabri mata temple and organized Shabri Kumbh. In Jhabua area of MP followers of Asaram Bapu (Now in jail) also organized similar congregation and the violence was witnessed in Jhabua (September 23, 1998). In Orissa Swami Laxamananand set up his work. Here Kandhmal violence of 2008 was seen.  Prior to this Pastor Stains was murdered by the Dara Singh aka Rajendra Singh Pal, (1999) who was part of Bajrang Dal.

While the accusation on Pastor Stains was that he is converting gullible Adivasis into Christian fold the Wadhava Commission report which went into this ghastly murder concluded that he was neither involved in the work of conversion nor the population of Christians showed any statistical increase in Keonjhar, Manoharpur (Orissa), where he was working.

While freedom of religion is our human and social right, it is also part of Indian Constitution. It is being challenged in practice through different mechanisms of assertion and that’s what is leading to constantly increasing violence against Christians and Muslims both.